The US-led coalition has revealed the identity of the Islamic State leader it arrested during an airdrop operation in northern Syria, saying he was a prominent bombmaker. But some Syrian opposition sources say they got the wrong man. 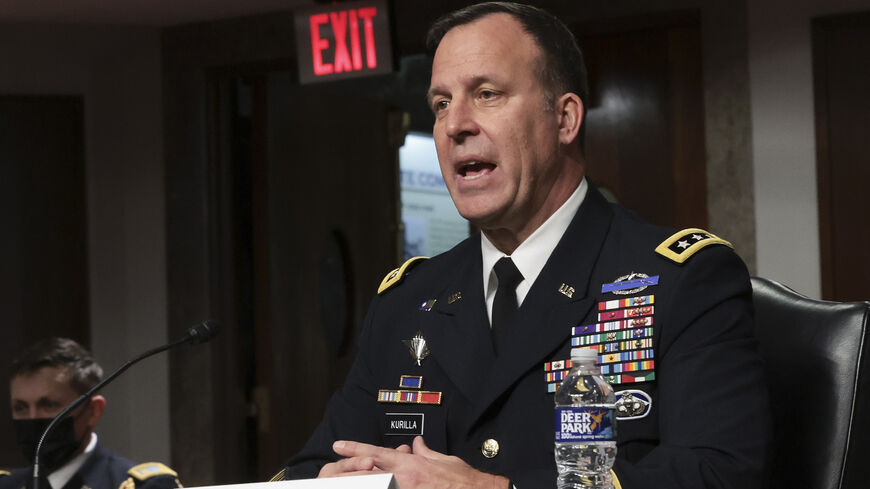 The US military revealed the identity of the Islamic State (IS) leader who was arrested in an airdrop operation in northern Syria June 16.

US officials identified the suspect as Hani Ahmed al-Kurdi, also known as the "Wali of Raqqa," according to The Washington Post.

Army Gen. Michael Erik Kurilla, head of US Central Command, was quoted by the Post as saying that the operation “demonstrates our commitment to security of the region and to the enduring defeat of ISIS [IS].”

In a separate statement released June 16, the US-led international coalition forces said that Kurdi, also known as Salim, was responsible for coordinating “terrorist” activities throughout the region.

The coalition added that Kurdi trained “terrorists” on manufacturing bombs, supported the construction of bomb-manufacture facilities, and facilitated attacks on US forces and allied forces, in reference to the Kurdish-led Syrian Democratic Forces (SDF).

Kurdi’s identity was revealed hours after international coalition forces carried out an airdrop in the countryside of Jarablus, north of Aleppo, during which he was arrested.

In its June 16 statement, coalition forces vowed to continue to hunt down IS remnants wherever they may be hiding, with the help of the SDF, Iraqi security forces and Iraqi-Kurdistan peshmerga forces.

The coalition further confirmed the success of the operation without recording any casualties among civilians or in the ranks of the coalition forces and their equipment.

Muhammad Yousef, who hails from the village of al-Humaira in the town of al-Ghandoura in the countryside of Jarablus, witnessed the airdrop operation. He told Al-Monitor that the day before, at 12:30 a.m., about eight planes were hovering at a very low altitude and were very loud and close.

“We watched with our own eyes soldiers landing in the northern direction of the village on a house for displaced residents from the countryside of Aleppo. The house was on the outskirts of the village, and the helicopters continued to hover at a very low altitude for an hour and a half to two hours. We heard the sounds of clashes, but they did not last for a long time. However, I was sure that they were between two opposite sides,” he recounted.

“After an hour and a half, at around 3 a.m., I went with several of my neighbors to the house where the operation had happened to see what was going on, because we were scared and shocked. We saw men and women tied to olive trees near the house. We helped unchain them and asked them what had happened. Crying and screaming, the women told us they [the forces] had taken a young man. We asked who the man was and why they took him,” he said.

Yousef continued, “It turned out the man [who was taken] is from the Aleppo countryside, and he is displaced and lives in the house where the operation took place. He is reportedly called Hani, but we do not know any other details about his nickname. We also learned that he lived with three men, one of whom is 75 years old, and the remaining are about 35. The women told us that the three men were taken, but they were screaming that they took Hani and left.”

Youssef added that this family has been living in the area for nearly four years, and the people of the neighborhood have not seen them cause any trouble. They were very respectful, and that young man’s job was to drive a diesel tanker every day. He would leave in the morning and return at night, according to Youssef.

Muhammad al-Haroun (pseudonym), who works as an activist in Jarablus, told Al-Monitor, “After hearing the sounds of clashes at around 3 a.m., before the helicopters left the airspace of the Aleppo countryside and headed toward their bases in Ain al-Arab east of the Euphrates, I immediately woke up to see what had happened, and I headed toward the site in the village of al-Humaira. Military officers from the [opposition-affiliated] Syrian National Army blocked the road and prevented me from entering the village in the first hours following the operation.”

“But after around an hour, I entered the village and there was an intensive military presence of the Sultan Murad Division affiliated with the Syrian National Army. Checkpoints were heavily deployed, and I was again prevented from going toward the house. When I took out my camera, they prevented me from filming,” Haroun said.

He said the area where the operation took place is very frightening. When asked what he meant by frightening, he said there are reportedly IS militants hiding in the area. “But the Syrian National Army or authorities never intervened, and I think there was never any operation carried out there. But last night (June 16), we were certain that the place in the village of al-Humaira was an IS site, especially following the operation.”

In a report on June 17, the Syrian Observatory for Human Rights said, quoting its own sources, that Kurdi is not “Wali Al-Raqqa” but rather the son of a prominent Sharia cleric in IS in Raqqa, Fawaz Al-Kurdi, who was killed in a previous coalition airstrike years ago.

The son who was arrested is a first-line leader in IS and an expert in explosives and drones, the war monitor added. For many months, he has been in al-Humaira area in the Jarablus countryside, northeast of Aleppo, which is under the control of the Turkish-backed factions. He owns oil tanks that constitute a front for him there. He is reportedly from the Karama area in the countryside of Raqqa.

The Observatory added that the coalition arrested three people during the operation: a first-level IS leader who is an expert in explosives and drones, and two of his bodyguards. According to the sources, the operation was targeting several leaders and members of IS in the Jarablus countryside. However, the coalition’s helicopters hovering in the air prompted many of them to change their places and disperse widely, which prevented the coalition from following up on the operation.

The Istanbul-based Jusoor Center for Studies published a report on June 16 in which it stated that coalition forces leading the operation set out from the Lafarge base of the international coalition, south of the city of Ain al-Arab in northeastern Syria. They arrived at the base several hours before, coming from another one of their bases in Hasakah.

The report clarified that although coalition forces evacuated the Lafarge base after Turkey’s military Operation Peace Spring in mid-October 2019, the base is still occasionally used for the forces’ operations, for logistic and reconnaissance purposes, as needed. The report suggested that the use of this base at the present time reflects US concerns of the impact of the anticipated military operation that Turkey is planning to launch in northern Syria on the coalition’s efforts to combat IS, especially since the Lafarge base is located within one of the areas that are potential targets in the possible Turkish operation.

Although the international coalition underscored in its June 16 statement its ongoing commitment to the partnership with the SDF in pursuing IS, this does not necessarily mean, according to the Jusoor center, that the partnership is limited to the SDF in Syria and that it will continue in the future.