In a move aimed at cutting off the militant group’s sources of revenue, the Treasury Department designated a Hamas official, three financial facilitators and six companies. 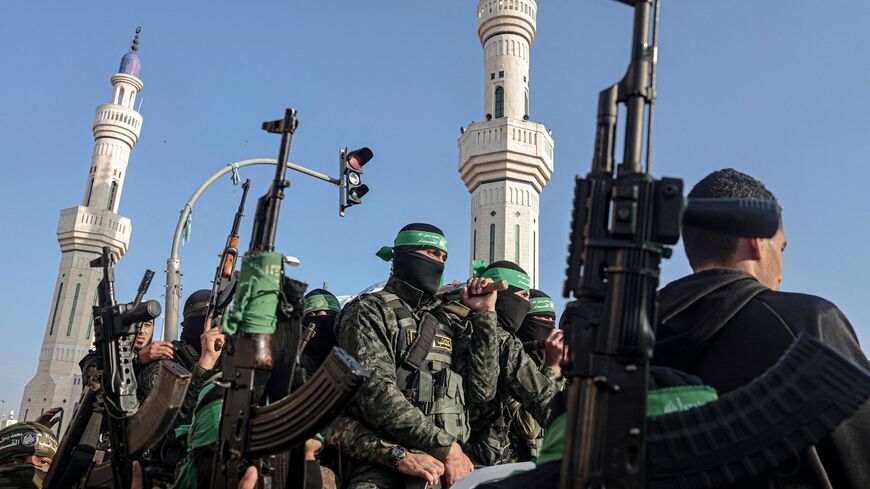 Members of the Izz ad-Din al-Qassam Brigades, the armed wing of the Palestinian Hamas movement, attend the funeral of their comrade Mohammed Abed in Rafah in the southern Gaza Strip, Feb. 16, 2022. - SAID KHATIB/AFP via Getty Images

The Biden administration sanctioned on Tuesday what it described as a network of Hamas financial facilitators and companies across the Middle East that generate revenue for the Gaza-based militant group through a secret investment portfolio.

The Treasury Department’s Office of Foreign Assets Control said the expansive network is overseen by Hamas’ Investment Office, which holds more than $500 million worth of assets and operates companies in Sudan, Turkey, Saudi Arabia, Algeria and the United Arab Emirates.

Among those sanctioned was Hamas official Abdallah Yusuf Faisal Sabri, a Jordanian national based in Kuwait. The department accused Sabri, who has worked in Hamas’ Finance Ministry for several years, of overseeing the group’s operational expenses and the transfer of large sums of money.

The department also sanctioned three financial facilitators and six companies based in Algeria, the UAE, Turkey and Saudi Arabia that are allegedly used by Hamas to conceal and launder funds.

“Hamas maintains a violent agenda that harms both Israelis and Palestinians. The United States is committed to denying Hamas the ability to generate and move funds and to holding it to account for its role in promoting and carrying out violence,” Price said in a statement.

The individuals and companies were sanctioned under Executive Order 13224, which allows the Treasury to block the assets of those who commit or pose a significant risk of committing acts of terrorism.

Hamas has ruled the Gaza Strip since 2007 and fought an 11-day war with Israel in May 2021. The United States designated Hamas as a foreign terrorist organization in 1997.

The Hamas sanctions come less than a week after the Biden administration blacklisted an alleged financial facilitator for the Lebanese militant group Hezbollah.