US eases sanctions on investment in Kurdish, Turkish areas of Syria 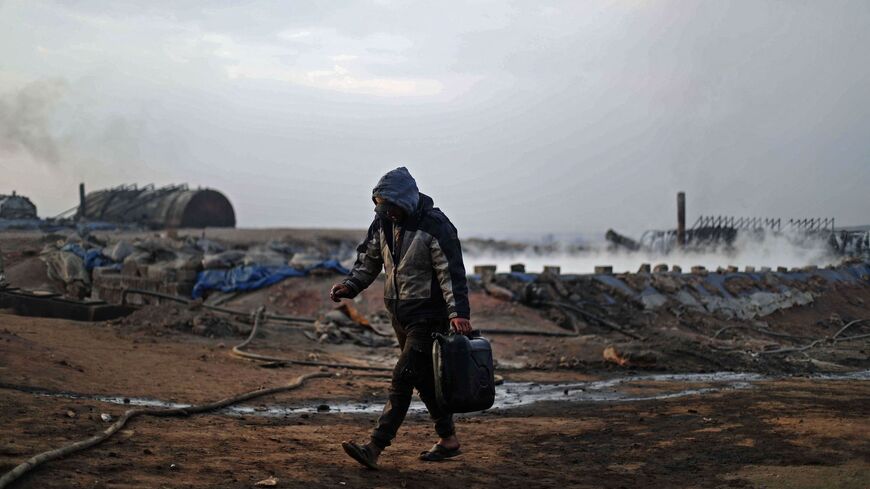 A Syrian worker is pictured at a makeshift refining installation in the Tarhin area near the Turkish-controlled city of al-Bab, in the north of the Aleppo province, on November 19, 2021. - AAREF WATAD/AFP via Getty Images

The United States has formally lifted sanctions on foreign investments in non-regime held areas of northern Syria, a long expected move that was held up by Treasury Department red tape as reported earlier by Al-Monitor.

The Treasury Department posted the authorization on its website, which allows activities in 12 different economic sectors in the US-protected and Kurdish government areas of northeast Syria and parts of Turkish-occupied north and northwest Syria. However, the authorization does not extend to oil, most of which sits in the northeast and is a vital source of income for the Kurdish-led autonomous administration governing northeast Syria.

The Syrian Kurdish entity lobbied hard for the restitution of a waiver on oil granted by the Trump administration. The move triggered an uproar, with Syrian President Bashar al-Assad accusing the United States of “stealing” his country’s oil. The Biden administration scrapped the waiver.

Foreign companies will now be allowed to invest in sectors such as agriculture, telecommunications, health services and education, part of a broader effort to stabilize areas previously under Islamic State control.

“Our aim is to prevent the resurgence of IS by mitigating the growing economic insecurity and restoring essential services in the areas liberated from the terrorist group,” said a senior administration official, speaking on background.

On Tuesday, the US ambassador to the United Nations, Linda Thomas Greenfield, announced $800 million in fresh aid to Syria at a donors’ conference in Brussels.

Mazlum Kobane, the commander in chief of the Syrian Democratic Forces, the US-led coalition’s top ally in the fight against IS in Syria, has long argued that eradicating the IS presence requires lifting the region’s economy out of poverty.

The northeast is where most of Syria’s cash crops, including wheat and barley, are grown. A killer drought last summer, the worst in the country’s recent history, wiped out production, with farmers crushed under the weight of their debts. The war in Ukraine has depleted global wheat supplies, and there is mounting worry that Russia will use its veto power at the United Nations Security Council to block the last humanitarian aid corridor to Syria that is outside the central government’s control.

All of this creates a fertile breeding ground for the jihadis who staged a bloody prison break in al-Hasakah in March which took the assistance of coalition forces to quell. They are growing increasingly active in Arab-majority Deir ez-Zor and in the desert areas under Syrian government control.

“Giving the autonomous administration in northeast Syria, the tools to develop a commerce economy, instead of becoming an aid economy, is the best way for stabilization,” said Nadine Maenza, chair of the US Commission on International Religious Freedom and a vocal advocate of easing sanctions on the Kurdish area.

“That is good US policy and helps in the US mission to fight ISIS. The only one that loses is Assad,” Maenza told Al-Monitor.

“Companies in neighboring states stand to get a lot of opportunity from this licensing,” the senior administration official said. “We have been in consultation with the Turks and other allies and partners to make sure that they were aware we had this initiative coming forward.”

Turkey is unlikely to invest in northeast Syria any time soon. Turkey views the fledgling Kurdish-led entity as a threat to its own security and has launched several large military operations against local Kurdish forces allied with the United States.

Ankara is also upset that the waiver does not cover the northwest province of Idlib that is controlled by the extremist Sunni group, Hayat Tahrir al-Sham, and Afrin, the majority Kurdish enclave that was occupied by Turkish forces in 2018. Idlib, home to over a million internally displaced Syrians, is arguably in the biggest need of financial relief, but HTS is listed as a terrorist organization by the United States and the United Nations, rendering any waiver impossible.

The administration officials briefing Al-Monitor insisted, however, that Idlib and Afrin were excluded because the authorization is for areas that were previously under IS control.

The administration — and Kobane — appear to believe that Ankara’s objections to trade with the Syrian Kurds will fade over time, as they did when the Kurds of Iraq established their own autonomous enclave under US protection in the early 1990s. Today Turkey serves as an economic lifeline for the Kurdistan Regional Government of Iraq and a top ally — against the PKK.

“We have heard interest from countries that belong to the counter [IS] coalition and we hope this general license will be something they can take advantage of,” a second administration official speaking on background said. The official declined to elaborate.

The officials made clear that sanctions against the Assad regime will remain in place.

"US sanctions are intended for the Assad regime. They are not intended for places like Raqqa that were bombed and places that were damaged" in the campaign against IS, the second official said.

“Areas outside of Assad’s control can become a model for stability in Syria and can make clear that if Assad is willing to engage in a meaningful political process and engage in reform, then there is an opportunity for economic recovery,” the official added.

“So this is precisely the opposite of normalization [with the Assad regime] and it builds on a strategy process over the last 18 months in which we have worked to solidify ceasefire lines to shore up the US presence for the campaign against [IS] and to prioritize humanitarian access.”