Sanctions exemptions are aimed at expediting humanitarian aid and diminishing the economic damage in certain areas. 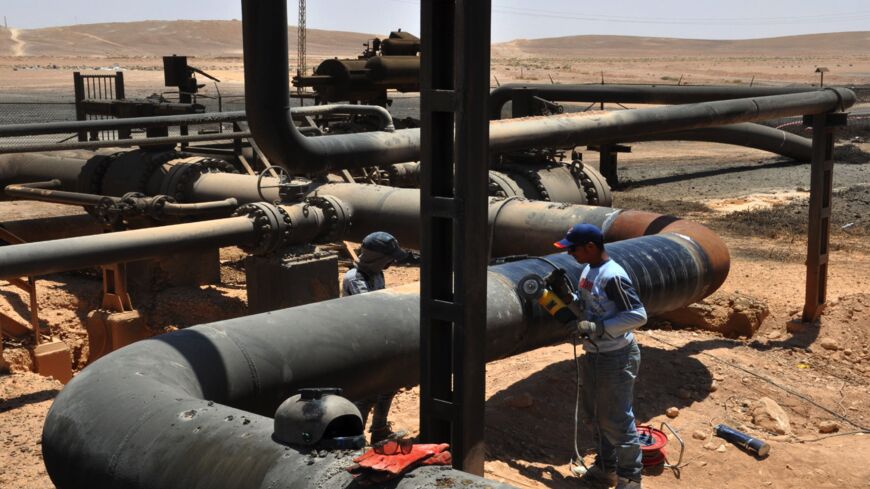 A picture taken July 9, 2017, shows workers at Syria's Arak gas field, 35 kilometers (20 miles) northeast of the ancient city of Palmyra, in the central province of Homs, a few weeks after it was retaken by government forces from the hands of jihadis of the Islamic State. - STRINGER/AFP via Getty Images

The Biden administration is expected to announce this week that Kurdish and opposition-controlled areas in Syria are to be exempt from sanctions against the regime of Syrian President Bashar al-Assad, according to several sources familiar with the decision speaking not for attribution to Al-Monitor.

The exemptions from the Caesar Syrian Civilian Protection Act will be formally relayed by Ethan Goodrich, the deputy assistant secretary of state for Near Eastern affairs who covers the Syria dossier, the sources said. The Office of Foreign Assets Control waiver on all sanctions for the areas outside the Syrian regime’s control will not cover oil and gas, the sources added.

Idlib, the northwest region controlled by Hayat Tahrir al-Sham, the Sunni militant group that is on the State Department’s list of terrorist organizations, is not included in the waiver. Nor is Afrin, the Kurdish majority enclave that was invaded and occupied by Turkish forces in January 2018.

Goldrich was in Ankara today briefing his Turkish counterpart, Selcuk Unal, before traveling to Erbil, the capital of the Kurdistan Region of Iraq. He is then expected to proceed to northeast Syria where he is due to meet with Mazlum Kobane, the commander in chief of the Syrian Democratic Forces (SDF), and Ilham Ahmed, the executive president of the Syrian Democratic Council, a top political body.

The waiver has reportedly been in the works since last summer but held up by Treasury department bureaucracy.

The State Department did not respond to Al-Monitor’s request for comment.

Kobane has been pushing for the exemption ever since the Caesar Act was introduced in 2019 against Assad and a slew of other individuals and entities implicated in war crimes against the Syrian people.

Kobane stressed in a November 2021 interview with Al-Monitor that widespread poverty and a lack of job opportunities compounded by the country’s worst drought in seven decades is creating a fertile breeding ground for IS recruitment.

His fears were vindicated when the jihadis staged a daring prison break in January in the region’s largest facility for IS detainees. The battle in and around al-Sinaa prison in the city of Hasakah raged for six days and left more than 200 people dead.

Turkey’s continued attacks from the air and on the ground are adding to instability.

The immediate purpose of the waiver is economic relief. “Everything else is secondary,” said one of the sources familiar with the decision.

For the fiscal year 2022, the State Department has requested $125 million in economic and stabilization aid for Syria. It remains unclear whether this amount will be increased.

Sanctions experts note that there is a precedent for the carving out of a region from a broader sanctions program as witnessed in Sudan. With the 2006 Darfur Peace and Accountability Act and the accompanying executive order, the United States imposed restrictions on Sudan but carved out Southern Sudan from the sanctions, allowing energy transactions with Southern Sudan "provided that the activities or transactions do not involve any property or interests in property of the government of Sudan," recalls Edoardo Saravalle, a sanctions researcher.

“The more common scenario is the opposite, where a separatist region is sanctioned while the country is not, as is occurring now in Ukraine with the [breakaway republics in Donbas],” Saravalle told Al-Monitor.

Oil and natural gas were likely excluded from the current waiver because of the legal headaches that would ensue. A foretaste of this came when, caving to pressure from Congress, Trump reversed his decision to withdraw an estimated 900 US Special Operation Forces from northeast Syria in the wake of Turkey’s October 2019 invasion. Trump said they were staying to "secure the oil."

In April 2020, Trump issued a waiver for an obscure private US oil company, Delta Crescent, to operate in northeast Syria. The Syrian government accused the United States of “stealing” its oil. Most of Syria’s oil wealth is located in Kurdish-controlled areas.

The Biden administration did not extend Delta Crescent’s waiver when it came up for renewal on April 30 last year. Administration officials say they are not in Syria “for the oil” but to combat remnants of the Islamic State (IS).

Saravalle predicts that the private sector “will continue to be very cautious when dealing with anything Syria-related, even with an exemption for one region, and will avoid doing anything that could implicate it in violating the overall sanctions program.”

More likely, Saravalle added, “Such an exemption could help improve the delivery of humanitarian assistance and diminish the economic toll in areas outside the Syrian government's control.”

The Treasury Department did not respond to Al-Monitor’s request for comment.

Nadine Maenza, chair of the US Commission on International Religious Freedom (USCIRF) who has traveled to northeast Syria numerous times, is among the earliest advocates of the exemption. “US sanctions were always meant to punish Assad, not the [Autonomous Administration of North and East Syria] (AANES). USCIRF often recommends sanctions to punish governments for religious freedom violations; we recommended this to reward them for positive conditions,” she told Al-Monitor.

Maenza added, “This would also further pressure the Assad regime’s economy by drawing businesses to the northeast. The AANES is now at the point where it will either become an aid economy that needs constant support or a commerce economy that can become self-sustaining. With 80% of the oil in Syria, fertile ground and businesses ready to invest, there is great potential for economic growth if the United States changes its policy to give the AANES this boost.”

But political calculations are also in play. The decision to include some of the Turkish-occupied areas were thrown in mainly as a sweetener to Turkey. Turkish officials are unhappy that Afrin and Idlib are not covered by the waiver, as these are the areas that would stand to benefit the most. They continue to harbor suspicions that the main purpose is to further cement Syrian Kurdish independence from Damascus, the sources briefing Al-Monitor said.

The distrust dates back to 2014 when the United States decided to partner with the Syrian Kurds in the fight against IS. Turkey insists that the SDF and its components are mere extensions of the PKK and uses this as justification for its repeated offensives against the northeast. The claim has some merit since many of the SDF’s top leaders, Kobane included, held senior positions within the PKK before moving to Syria at the start of the uprising in 2011.

Turkey’s other claim — that the SDF poses an existential threat — does not. Kobane has repeatedly stressed that he wants peaceful, neighborly relations with Ankara, and his forces have rarely if ever initiated aggressive action against Turkish forces. Kurdish attacks against the Turkish-occupied areas are carried out by armed groups thought to be directly under the PKK’s control.

The hope is that the waiver may eventually lure Turkish companies to invest in the northeast This, in turn, may help reignite talks between Ankara and the imprisoned PKK leader, Abdullah Ocalan. It’s a long shot.

The talks were supposed to result in an end to the PKK’s armed insurgency and greater rights for Turkey’s long-repressed Kurds, with positive knock-on effects for their Syrian brethren. The talks were abruptly shelved in 2015.

The Kurds’ refusal to team up with the Syrian opposition in the fight against Assad is cited as a reason for Ankara’s volte face. Erdogan’s own political ambitions is another. But the overriding factor was the Turkish military’s growing alarm at the emergence of a second Kurdish statelet across its borders.

Either way, Erdogan is facing re-election in 2023, and any moves seen to favor the Kurds would likely blow up his informal alliance with far-right nationalist leader Devlet Bahceli.

However, the fact that Ankara has not reacted publicly so far to the initial reports of the sanctions waiver is a positive sign. It may be because it can torpedo the process at any time by leaning on its Iraqi Kurdish allies. Turkish pressure is thought to have played a part in the collapse of US-sponsored reconciliation talks between the Democratic Unity Party, which shares power in the AANES, and its rivals in the Kurdistan National Congress, which has close ties to Iraqi Kurdistan leadership.

In December, the Kurdistan Regional Government (KRG) sealed its border with the AANES following violent clashes between its security forces and a PKK-linked Kurdish youth group on the suspension bridge linking the two sides.

Access continued for coalition forces but was denied to humanitarian and commercial traffic and private individuals. It took a month of US mediation to get the KRG to reverse course.