The decision to withdraw the waiver to produce and sell oil in Syria has been presented by administration officials as a policy correction, not a shift. 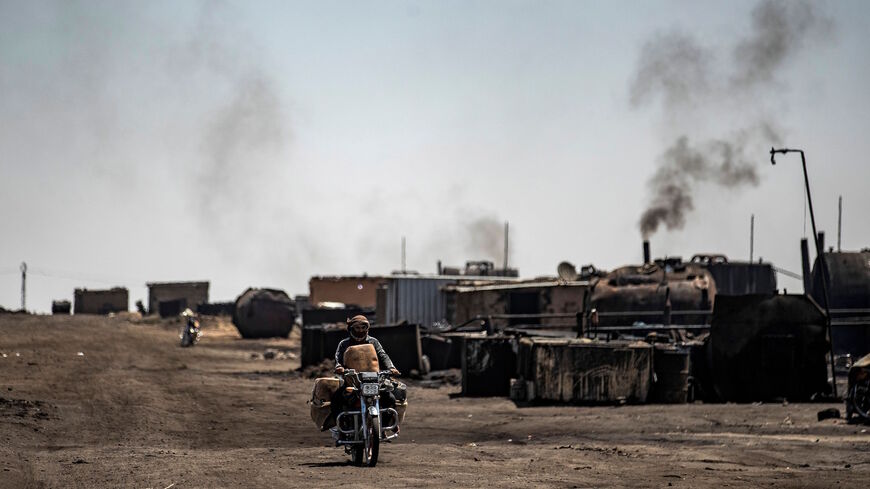 A man drives a motorcycle past a makeshift refinery using burners to distill crude oil in the village of Bishiriya in the countryside near the town of Qahtaniya west of Rumaylan (Rmeilan) in Syria's Kurdish-controlled northeastern Hasakah province, on July 19, 2020. - DELIL SOULEIMAN/AFP via Getty Images

The Biden administration has decided to not extend a sanctions waiver granted by the Trump administration in April 2020 to a little-known American oil company to operate in northeast Syria, according to well-informed sources who spoke to Al-Monitor on condition they not be cited by name.

Delta Crescent Energy, whose waiver expired April 30, has been given a 30-day grace period to wind down its activities in northeast Syria. The US-protected area is governed by the Kurdish-run autonomous administration of northeast Syria, which is not recognized by Damascus. A Delta Crescent Energy spokesperson insisted in emailed comments to Al-Monitor, "The Office for Foreign Assets Control extended our license. No wind down period."

The decision to withdraw the waiver to produce and sell oil in Syria, which remains heavily sanctioned under the Caesar Act, has been presented by administration officials as a policy correction, not a shift. As such, no other companies are likely to be granted waivers, either.

The company has mounted an energetic lobbying campaign to get the waiver renewed, but sources familiar with the effort say they are unlikely to succeed. Former chief envoy for Syria James Jeffrey is reportedly involved in the effort. Jeffrey, who now heads the Wilson Center's Middle East Program, did not respond to claims that he was informally lobbying in support of extending Delta Crescent Energy’s sanctions waiver. The Delta Crescent Energy spokesperson said, "While we appreciate his experience and knowledge on the subject, James Jeffrey is not involved in any efforts we have underway."

President Donald Trump had stated in October and November 2019 that US forces would remain in northeast Syria “only for the oil” and that they may “have to fight for the oil,” spurring angry responses from Damascus and Ankara, one of the dominant foreign forces alongside Russia and Iran in Syria. This followed Trump’s earlier decision to withdraw US forces from Syria and to greenlight a Turkish attack against the Syrian Kurds in October 2019. Faced with a congressional outcry from both sides of the aisle, he changed course on the withdrawal, citing oil as the reason.

Biden administration officials say they are in Syria “for the people" not "for the oil.” During a recent trip to northeast Syria, a US delegation led by Joey Hood, the acting assistant secretary of state for Near Eastern affairs, assured the Syrian Kurds that Washington would keep up its support to them, maintaining current troop levels of around 900 US special operations forces, releasing stabilization assistance that was frozen by Trump and helping efforts to broker a power-sharing agreement between the local government and its political rivals in the Kurdistan National Council. Some $50 million in assistance has been disbursed so far.

The State Department said in a statement that Hood “underscored the U.S. commitment to cooperation and coordination in the Coalition to Defeat ISIS [Islamic State], continued stability in northeast Syria, and the delivery of stabilization assistance to liberated areas to ensure the enduring defeat of ISIS.”

Jeffrey sounded unimpressed. “Syria is a black hole in this administration,” he said in a WhatsApp exchange with Al-Monitor. “Most of the policies from [the Trump administration] continue superficially — keep troops in [northeast Syria] and Tanf, support UN 2254 process, sanctions stay in place,” he said. He was referring to the small contingent of US forces near Syria’s border with Jordan and to the UN resolution adopted in December 2015 for a political resolution of the Syrian conflict. Jeffrey continued, “But there is neither a guiding strategy visible nor an envoy to execute it and talks with the Russians stopped. Why? I can’t explain it.”

The deal with Delta Crescent Energy, first reported by Al-Monitor, has been mired in controversy from the get-go. The Delaware-registered entity was founded by US Army Delta Force veteran James Reese, former Ambassador James Cain and former Gulfsands Petroleum executive John P. Dorrier Jr., all with close ties to the Republicans. They include Sen. Lindsey Graham, R-S.C., who first announced in July 2020 that the Syrian Kurds had struck a deal with an unidentified US company to “modernize the oil fields.” Former special envoy for Syria Joel Rayburn confirmed during a congressional hearing in December 2020 that the Trump administration had actively lobbied for a sanctions waiver for Delta Crescent Energy, the only one to have been granted one so far.

Jeffrey said, “I believe that if they meet the same Office of Foreign Asset Control criteria now as they did in 2020 then that decision, which is technical and legal, should be a no-brainer and some ‘policy’ should not block it.” Jeffrey added, “Believe me while I saw policy benefits then with granting a license that’s not how they got it — they got it by meeting Treasury criteria for granting licenses.”

However, what Jeffrey did not say is that the State Department is asked to issue guidance to the Treasury Department stating whether the license is in line with US policy. At the time the license was granted on the policy basis that it supported Trump’s purported objectives on oil.

An administration source said President Joe Biden “does have a Syria policy and that policy is that we’re not in Syria for the oil. We’re in Syria for the people.” The source added, “We have a campaign against the Islamic State and we’re extensively focused on providing humanitarian assistance.” This includes seeking to persuade Russia to drop its veto on letting UN assistance flow through the Yaroubiyah border crossing with Iraq and working with Turkey to relieve the humanitarian crisis in the rebel held province of Idlib in northwest Syria. “It’s simple and its sensible,” the source said. Halting Delta Crescent Energy’s operations may serve as an incentive for Russia to ease its opposition to allowing UN aid to northeast Syria through Iraq.

Critics of the Delta Crescent Energy deal also point to a host of international legal tangles that are likely to arise from marketing oil under an accord signed with a nonstate actor, in this case the Syrian Democratic Council, which is the political arm of the Syrian Democratic Forces (SDF), the Kurdish-led militia that has led the coalition-backed battle against the Islamic State. Damascus has accused the United States of stealing Syria's oil and breaching its sovereignty. The vast majority of Syria’s oil is in the Kurdish-controlled region.

Proponents of extending Delta Crescent Energy’s waiver make a moral case for helping the Syrian Kurds, who played a critical role in helping defeat the Islamic State, with over 10,000 SDF and affiliated forces dying in battle. “If Biden is sincere about sticking with America’s allies, this a golden opportunity to prove it and to help stabilize northeast Syria, to build capacity and become a role model for the rest of Syria,” said one of the sources familiar with the issue. This chimes with the administration’s stated goal of preventing IS from resurging, the source added.

Most immediately and critically, the refinery Delta Crescent Energy plans to build would help mitigate the environmental crisis triggered by hundreds of makeshift refineries belching fumes and contaminating rivers in northeast Syria.

Sinam Mohammed, Washington representative for the Syrian Democratic Council, told Al-Monitor that the Kurdish-led autonomous administration was in favor of an extension. “Our economic situation is so difficult. We are under economic siege with international sanctions and closed borders. And it’s been a particularly difficult situation this year because of the lack of rain. Wheat and other essential crops have been affected and we have 5 million people living in our area,” she said. “This company can work with us for developing our area.” However, she emphasized, “We have excellent relations with the Biden administration.”

The Syrian Democratic Council is unlikely to jeopardize these by going to the mat over the Delta Crescent Energy waiver issue. Washington needs to keep the Kurdistan Regional Government in neighboring Iraq on an even keel and so does the Syrian Democratic Council. Access via Iraqi Kurdistan is vital to the presence of coalition troops in northeast Syria. Privately, though, Syrian Kurdish officials rue Washington’s move, saying the Office of Foreign Asset Control license served as a shield of sorts against the regime and Russia’s pressure to relinquish control over the oil.

Critics ask, “What revenue?” Neighboring Turkey, which has little oil of its own, would be the obvious market. But Turkey is doing everything it can to ensure that that a yet another semi-independent Kurdish entity similar to the Kurdistan Regional Government does not take root. Oil exported via Turkey played a big role in bolstering the Iraqi Kurds’ autonomy.

As Ankara sees things, it’s not about to repeat that “mistake” and has been unremittingly hostile to the Syrian Kurds ever since a peace process that it was conducting with its own Kurds broke down in 2015.

The Delta Crescent Energy deal has deepened Turkish paranoia about the United States’ intentions in northeastern Syria — namely that it may be midwifing a Kurdish state that would seek to incorporate large chunks of Turkey’s Kurdish-majority southeast. Those suspicions have been amplified by the fact that the SDF and the Syrian Democratic Council are led by individuals who were formerly part of the Kurdistan Workers Party militia that is fighting Turkey.

Not only that, Turkey is facing up to $26 billion in damages after Iraq launched a case in an international arbitration court for its role in helping the Kurds sell their oil in defiance of Baghdad. It is therefore unlikely to face the same situation by getting formally involved in helping the Syrian Kurds sell theirs, though it is a thinly disguised secret that ample quantities of Syrian Kurdish oil make their way illegally to Turkey via Iraqi Kurdistan.

Turkey’s stiff opposition has led the Iraqi Kurds, who rely heavily on Ankara’s continued cooperation in exporting their oil, to robustly oppose any deal with Delta Crescent Energy as well. SDF commander in chief Mazlum Kobane hinted as much in a January 2020 interview with Al-Monitor saying that the sides had “problems agreeing on a price” for the oil.

“I think [Delta Crescent Energy officials are] hopeful and truly don’t understand the political constraints,” one of the administration sources noted.

Delta Crescent Energy maintains nonetheless that it has struck two separate deals to sell and transport the oil. Sources familiar with the issue said the first was with an unnamed American company earlier this year for the sale of 5 million metric tons, which is supposed to generate $1.1 billion, and the second one, estimated at $1.23 billion, this month with another unnamed company. One of the sources said that “to facilitate this,” Delta Crescent Energy received transport and export licenses “in order to ensure all trade was conducted within [Office of Foreign Asset Control] license requirements.” But the source was unable to clarify which entity had granted the said licenses; it clearly wasn’t the Syrian government.

In February, after Biden took office, Delta Crescent Energy did receive an export license from the Department of Commerce to ship the first US-manufactured production equipment to northeast Syria. The equipment included solar-powered meters to monitor the flow of oil from the fields in the Kurdish-controlled zone, the sources said. The sources added that Delta Crescent Energy had set up a physical office in northeast Syria in September 2020 with a staff of around 10 to 15 people.

Syrian Kurdish sources with knowledge of Delta Crescent Energy’s activities maintain that there is no evidence that the company has embarked on any kind of substantial activity inside northeastern Syria so far. “Their office isn’t even really an office,” one of the sources said.