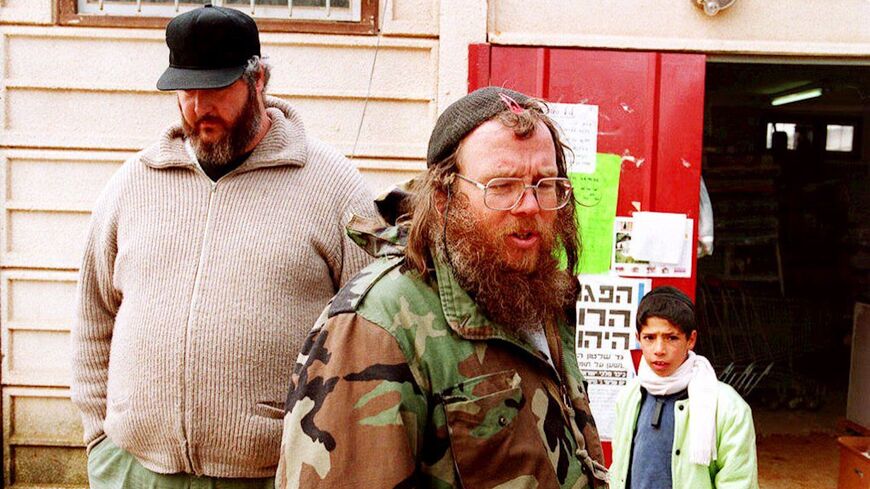 Followers of the outlawed Meir Kahana group Kach, US-born Ruven Ben David (L) and Rabbi Meir Kuzriel (C) stand in the settlement of Tapuah on March 14, 1995. Israel branded two groups, Kach and Kahane Lives, as "terrorist" and vowed to shut down their operations in the aftermath of a massacre in Hebron. - SVEN NACKSTRAND/AFP via Getty Images

The United States removed five groups from its terror blacklist for inactivity on Friday, including a radical Jewish organization in Israel and two Islamist movements in Egypt and the Palestinian territories.

The State Department has revoked the foreign terrorist organization designations of the Mujahidin Shura Council in the Environs of Jerusalem, Kahane Chai and Gama’a al-Islamiyya, as well as Japanese cult Aum Shinrikyo and the Spanish separatist group Basque Fatherland and Liberty.

Kahane Chai is an ultranationalist Jewish organization that advocated for the expulsion of Arabs from Israel. Three years before its FTO designation in 1997, one of its supporters killed 29 Palestinian worshippers at the Ibrahimi Mosque in the West Bank city of Hebron.

The Mujahidin Shura Council in the Environs of Jerusalem is a Palestinian jihadist group added to the terror list in 2014. The Gaza-based group claimed responsibility for a string of rocket attacks in 2013 and declared support for the Islamic State the following year.

Gama’a al-Islamiyya is a Sunni militant movement that sought to overthrow the Egyptian government and install an Islamic government.

The Immigration and Nationality Act requires the State Department to review FTO designations every five years and rescind the labels if organizations are no longer participating in terrorist activity.

“These revocations do not seek to overlook or excuse the terrorist acts each of these groups previously engaged in or the harm the organizations caused its victims, but rather recognize the success Egypt, Israel, Japan, and Spain have had in defusing the threat of terrorism,” the State Department said in a statement.

The department said all five groups will remain Specially Designated Global Terrorist entities under Executive Order 13224 in order to support law enforcement actions or ensure frozen assets are not released to individual members of the groups.

Their delisting on Friday comes as the Iranian nuclear talks are held up over Tehran’s demand that Washington revoke the Islamic Revolutionary Guard Corps’ designation as an FTO. The Trump administration put the IRGC on the terror blacklist in 2019.