The Republican letter comes as nuclear talks remain at a standstill over Iran's insistence that the United States delist the IRGC as a terrorist organization. 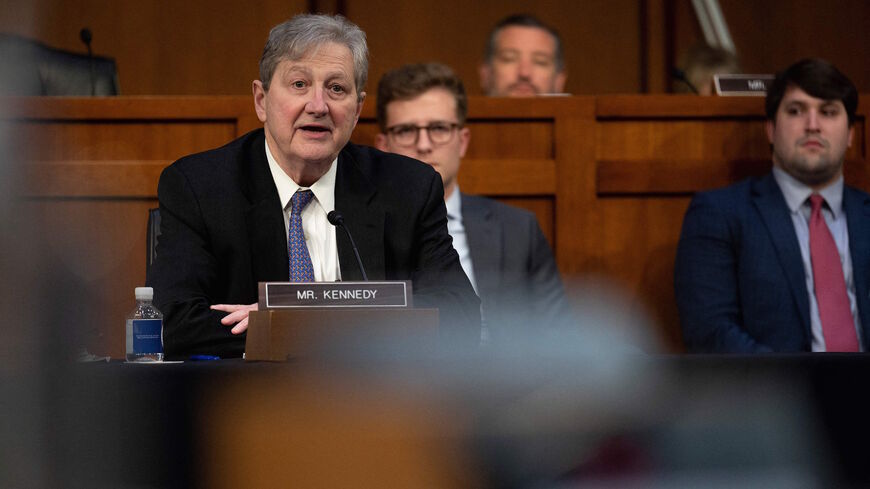 US Senator John Kennedy, R-LA, speaks during a full committee markup to vote, on the nomination of Ketanji Brown Jackson to be an associate justice of the Supreme Court of the United States, on Capitol Hill in Washington, DC, on April 4, 2022. - JIM WATSON/AFP via Getty Images

A group of Republican senators warned President Joe Biden on Monday against lifting the Islamic Revolutionary Guards Corps’ terrorist designation, which Iran has made a condition of its return to the landmark nuclear accord.

Whether the IRGC remains on Washington’s formal list of terror organizations remains the principal sticking point in the now-paused talks in Vienna. The Trump administration imposed the designation a year after it withdrew from the nuclear pact, marking the first time the United States had ever branded part of another country’s military as a foreign terrorist organization (FTO).

On Monday, 14 Senate Republicans wrote that dropping the label would be “wildly misguided” given that the IRGC has "shown no meaningful change in conduct."

Last week, armed groups linked to the IRGC were blamed for attacks in Syria and Iraq that targeted facilities hosting the US-led international coalition. The IRGC took credit in March for a ballistic missile attack near the US Consulate in the Iraqi Kurdish capital of Erbil.

“The removal of this terrorist designation from an organization that continues to carry out acts of terror will undoubtedly show the world that the United States’ terrorist designations are political tools that this administration is willing to barter and trade whenever it suits its political goals,” read the letter led by Sen. John Kennedy, R-La.

On Friday evening, The Washington Post quoted an unnamed senior administration official as saying Biden doesn’t plan on meeting the Iranians’ demand for delisting. The Republican senators called for the Biden administration to go a step further by “publicly and categorically” rejecting any discussion of taking the IRGC off the terror blacklist.

Experts point out that if the FTO designation were lifted, the IRGC would remain sanctioned under other authorities, including the list of specially designated global terrorists (SDGT). The IRGC’s shadowy overseas arm known as the Quds Force is also an SDGT.

Recent statements from administration officials have fueled speculation that US negotiators could offer Iran a compromise whereby the IRGC’s FTO designation would be revoked in exchange for the Quds Force’s placement on the terror list as a separate entity.

Last week, Joint Chiefs Chairman Gen. Mark Milley told a congressional hearing that he believed the Quds Force was a terrorist organization whose delisting he would not support.

Al-Monitor later asked the State Department whether it considered the IRGC in its entirety to be a terrorist organization, and a spokesperson replied that “we are not going to negotiate in public.”

“The president has made clear he’ll do what’s in the best interest of US security — and the onus here is really on Iran at this stage, particularly on this issue,” the spokesperson said on Monday.

Naysan Rafati, a senior Iran analyst at the International Crisis Group, cautioned against reading too much into the administration’s parsing.

"It could be a distinction that hints at a wider consideration being made within the administration to see if those things could be split up. It may not," he said. "And then even if it is, the question becomes is that a distinction that the Iranians would be willing to accept?"

Tehran has signaled it is unwilling to budge. An unnamed Iranian diplomat told Reuters that Iran rejected the idea of branding the Quds Force a terrorist organization in return for delisting the broader organization.

Behnam Ben Taleblu, a senior fellow at the Foundation for Defense of Democracies, said such a compromise would amount to “Western mirror-imaging 101.”

“If the administration makes the case that the Quds Force is a terrorist group and the parent entity — the entire IRGC — is not a terrorist group, this would be a needless bureaucratic decision not represented by the facts on the ground,” he said.