The Nesin Foundation, which built Turkey’s famous Mathematics Village, says its accounts were blocked on unfair charges after it conflicted with a neighboring Islamist foundation. 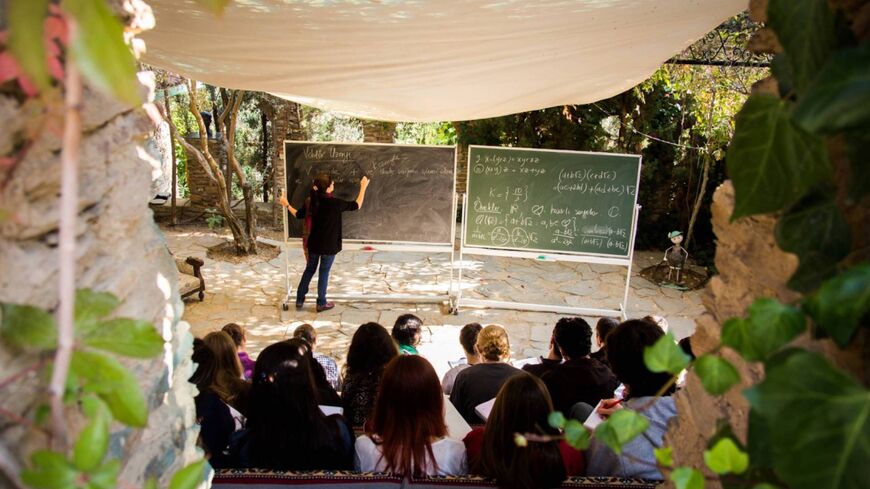 Students attend a lecture in this undated image at the Nesin Foundation's Mathematics Village. - TWITTER/wiris

An award-winning Turkish foundation supporting education claimed that its bank accounts were blocked on bogus charges following a conflict with a religious sect with ties to the government.

“This is enough,” Ali Nesin, the son of iconoclast Turkish writer Aziz Nesin, announced May 8 on Twitter. “The Istanbul governor’s office blocked the Nesin Foundation’s bank accounts. Our foundation has salaried employees and many kids on scholarship — what they have done is cruel.”

The Istanbul governor’s office has accused the foundation of an illegal donation campaign and wants it to return the land it bought with donations in Catalca, Istanbul, to the Treasury.

The move against the foundation, known for its advocacy of scientific thinking and liberal views, has been decried by the opposition parties in parliament. “If the Nesin Foundation, like other foundations subject to Turkish law, is allowed to receive donations from supporters, what is the problem with receiving donations to buy land?” asked Lale Karabiyik, the opposition Republican People’s Party’s deputy chair responsible for education policies. “Is there any truth in the Nesin foundation’s claims that a religious sect influenced the charges brought against it?” The question, addressed to Interior Minister Suleyman Soylu, has not yet received an official reply.

DEVA Party chair Ali Babacan, whose party also brought the issue to parliament, said that Turkey needs to encourage rather than sabotage good educational initiatives. Even Umit Ozdag, the ultranationalist leader of the anti-refugee Zafer Party, protested the blocking of accounts. “I have never agreed  nor will I ever agree" with the views of Ali Nesin and the Nesin family. But the Nesin Foundation-founded "Mathematics Village is a great place and should never be harmed. The nationalist young people who go there say they have learned a lot,” tweeted Ozdag.

The Nesin Foundation was established in 1973 by Aziz Nesin, a writer, editor, translator, satirist and outspoken atheist who narrowly escaped death in a 1993 arson attack by radical Islamists after he translated Salman Rushdie’s “The Satanic Verses.” When he died in 1995, his son Ali took over the foundation. He established a picturesque mathematics center in Sirince, a town made famous by Armenian-Turkish writer and famous fugitive Sevan Nisanyan, a close friend of Nesin. In 2018, Ali Nesin, a mathematician, received the prestigious Leelavati Prize from the Berlin-based International Mathematics Union for increasing public awareness of mathematics in Turkey and his “tireless work" in creating the Mathematics Village as an “exceptional, peaceful place for education, research and the exploration of mathematics for anyone.”

The foundation, which also owns a publishing house, has its main building in Istanbul’s Catalca district, where there is a 70,000-volume library, classrooms and dormitories on 14 acres. It offers scholarships and a place to stay and learn to children aged 3-11. In 2017, the foundation announced that it wanted to buy an adjacent plot and build a high school. It declaring its intention in a Facebook post and gave a bank account where people could make donations.

It was an unauthorized donation campaign, Istanbul governor’s office said in a statement, explaining that the foundation received about four million Turkish liras ($260,000) and used nearly half to buy the land. The report quoted inspectors as saying that the foundation should have asked for a separate authorization to gather donations for the land. Following the inspection commission’s findings,  the governor’s office said it had ordered the blocking of the Nesin Foundation’s accounts on April 5 and demanded the return of the purchased land to the Treasury. The foundation opened a case against the decision two weeks later.

“We are a foundation that stays afloat with donations, and we are, by law, authorized to receive funds,” said the foundation’s lawyer Cenk Sobe. “We did not launch a specific donations campaign, we simply announced how we would use the funds. The interpretation of the law is brutal and ill-intentioned. Blocking the funds is cruel.”

Ali Nesin, an outspoken and media-savvy figure, blames the crisis on the foundation's troubled relationship with Rabita Vakfi, a foundation he says is linked to the powerful Ismailaga sect, which moved next door in 2020. “When they moved in as neighbors, I thought it was rather lovely to have such diversity. After all, Turkey should be a country where different beliefs and lifestyles can live together in peace," he said in his Facebook post.

But relations between the fiercely secular Nesin Foundation and the Rabita Foundation, whose website advocates Ottoman-style madrasas as the best form of education, went south almost immediately. The two sides leveled accusations at each other as Turkey’s polarized press picked sides. “The Nesin Foundation, which thinks Catalca is its own backyard, shamelessly accuses Rabita of aggression,” thundered Islamist Yeni Akit, claiming that there had been systematic rape of students in the foundation, referring to a charge that was dropped after a medical report had failed to confirm it in 2008. Cumhuriyet and Birgun, meanwhile, published articles on Rabita's illegally built masjid after the Nesin Foundation made a complaint to the municipality on the construction.

Suleyman Cihangiroglu, who took over direction of the foundation from Ali Nesin in 2019, said that when inspectors first examined the issue, they ruled that there had been no problem. Still, they reopened the file after conflicts with Rabita flared up.

“It was then that the inspectors came and started checking our accounts. They first said that there was nothing wrong, as we, under the law, give annual reports on our activities. Then they said that we had started an unauthorized collection campaign,” he said.

Rabita denies that it had anything to do with the blocking. A statement on its website says that it had not even been aware of the block on the Nesin Foundation's accounts.

When asked by Al-Monitor over the phone whether Rabita had filed any complaints against the Nesin Foundation, a member brusquely replied that they had nothing further to say and any questions should be addressed to Nesin Foundation.