TikTok content creators in the countryside of Aleppo and Idlib face a spate of arrests over accusations of corrupting the public morality of the local Syrian community. 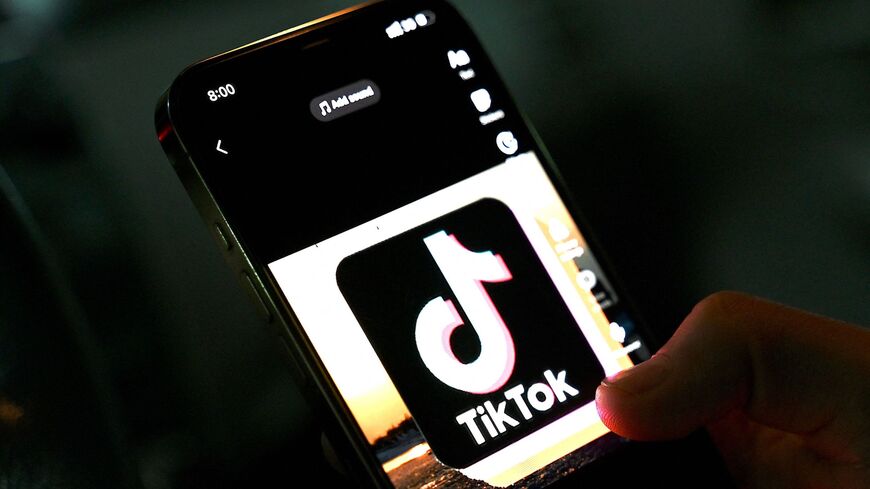 In this photo illustration taken on April 21, 2022, the icon of a video-sharing mobile phone application TikTok is pictured on a mobile phone. - WAKIL KOHSAR/Afghanistan/AFP via Getty Images

ALEPPO, Syria — The Directorate of Education of the Azaz local council in the north of Aleppo, affiliated with the Turkish-backed Free Syrian Army (FSA), issued a decision May 29 dismissing a female teacher in one of the city’s schools over a TikTok video.

Another teacher affiliated with the Directorate of Education in the city of Azaz told Al-Monitor on condition of anonymity, “The directorate dismissed teacher Hanadi Othman who works at the Ali ibn Abi Talib Primary School, a decision that was effective as of Sunday, May 29, over a TikTok video filmed inside the classroom in which Othman showed her feet — nothing revealing.”

The video appears to have angered some TikTok users, denouncing it as in direct conflict with the values of education.

Other users commented that the video was offensive to the educational process because it shows the teacher putting her feet on her desk in front of her while singing an Arabic song along the lines of “I never liked education and never thought of going to university.”

Othman also faced scathing comments from male TikTok users who commented on “her lack of modesty and insolence for using TikTok in the first place.”

This is not the first time that Syrian opposition parties have punished people for content on TikTok.

On May 9, two young men had their heads shaved by members of the FSA-affiliated Liberation and Building Movement. The two young men, Ismail Awad al-Saleh and Taj al-Din Muhammad Haj Ahmed, were arrested and then forced to apologize for a TikTok video that was filmed in the city of al-Bab in the eastern countryside of Aleppo in which they speak about women. They were released the next day.

On May 11, a security body affiliated with the FSA-affiliated Ahrar al-Sham arrested Mahmoud Mohammad Abbas, known as Abu al-Wafa al-Shami on TikTok, over a video that the security forces deemed offensive to public morality.

Shami also had his head shaved as a punitive measure and made a public apology before his release.

On May 20, the FSA-affiliated Northern Storm Brigade in Azaz arrested a man called Abu Amir who has a joint TikTok account with his wife. He was also accused of obscenity and was punished with a forced head shave before he was released.

An FSA military official told Al-Monitor on condition of anonymity, “The FSA is not against young people using different social media applications for fame and money and other aspirations, but they have to stick to the morality and ethics of the liberated areas and not go beyond customs and traditions.”

The FSA factions in the countryside of Aleppo are not the only ones arresting content creators for “offensive” TikTok videos, but also Hayat Tahrir al-Sham, which controls Idlib.

Over the past two months, HTS arrested several people accused of publishing TikTok videos that are offensive to women in Idlib.

On May 28, HTS’ security forces apprehended a young man for sharing a video recording of him dancing, which was deemed immoral.

A photo of the young man circulated on social media later on in which he was shown with a shaved head. It remains unknown if the man will spend some time behind bars or if the punishment will be limited to the shave.

In April, HTS’ security force also arrested another person in Idlib on the same accusation, according to HTS’ Telegram accounts. Other young people were arrested in the past weeks for similar reasons.

A source close to HTS told Al-Monitor on condition of anonymity, “It seems that the situation in Idlib now needs the establishment of a morality police, given all the videos that are offensive to women and where men appear to harass them in the streets and markets. They filmed themselves doing outrageous acts and shared them on social media; it’s obscene.”

Wissam al-Qassoum, a member of the Syrian opposition-affiliated Syrian Islamic Council in Aleppo's countryside, told Al-Monitor, “Freedom is a right for every person provided that it does not harm others. The Syrian community has its own morality and etiquette that should not be violated.”

Muhammad al-Sukari, a researcher in Syrian affairs who resides in Turkey, told Al-Monitor, “A distinction must be made between using various means of communication, including TikTok, which is personal freedom, and using these in a bad way with the aim of threatening security and public safety.”

“Social media content should now have its own clear law to identify what’s permissible and what is not instead of taking random measures in this regard,” he added.

It seems that the FSA in the Aleppo countryside and HTS in Idlib do not have any clear law that punishes content creators on social media. This is why the accused did not face jail time but were punished with a head shave instead.

Abdel Nasser Hoshan, a lawyer based in Turkey, told Al-Monitor, “The Syrian law implemented in the FSA-controlled areas in north Aleppo includes texts criminalizing infringement of public morality and conduct, providing for punishment for disorderly conduct, ridicule, disrespect and any infringement of good behavior.”