Foreign Minister Mevlut Cavusoglu met with his counterpart Riad al-Maliki in Ramallah and reaffirmed support for a Palestinian state before his next meeting with Israeli leaders. 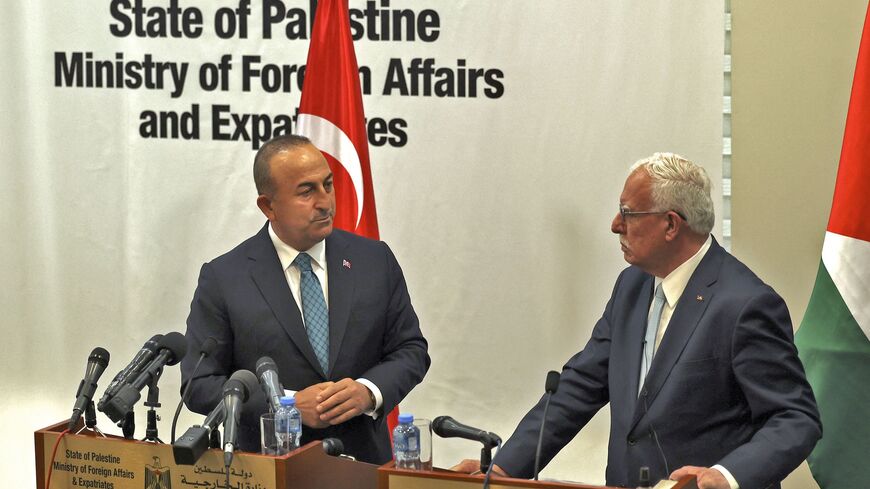 Palestinian Foreign Minister Riyad al-Maliki (R) and Turkish Foreign Minister Mevlut Cavusoglu attend a press conference after meeting in the city of Ramallah in the occupied West Bank on May 24, 2022. - ABBAS MOMANI/AFP via Getty Images

Turkish Foreign Minister Mevlut Cavusoglu said Turkey will continue to support Palestine’s fight for independence and sovereignty on the first leg of his two-day trip to Israel and Palestine today.

Speaking at a news conference with his Palestinian counterpart Riad al-Maliki in Ramallah, Cavusoglu said, “Turkey stands with Palestine and Palestinians in their struggle for an independent and sovereign state.”

The Palestinian cause is supported across party lines in Turkey, Cavusoglu observed, adding that Israeli aggression against Palestine, including illegal settlements and forced evictions, has  torpedoed peace efforts. Cavusoglu also aired concerns over violent clashes between Israeli security forces and Muslim worshipers at the Al-Aqsa mosque in Jerusalem.

Al-Maliki described relations between Palestine, a former Ottoman dominion, and Turkey as “distinguished, authentic and strong.”

The pair signed ten agreements in the fields of education and health, among others. Cavusoglu said these would help increase the volume of trade between the two sides to $2 billion.

“What we heard [from Cavusoglu] has reinforced our position and what we do to achieve freedom and independence,” al-Maliki said.

Cavusoglu’s trip is part of a broader effort of mending fences with regional neighbors, including the United Arab Emirates, Saudi Arabia, and Egypt.

Relations with Israel have remained bumpy ever since the killing of nine Turkish citizens aboard the Mavi Marmara aid flotilla in 2010 by Israeli forces. Israeli attacks on Gaza and Turkey’s alleged attempts to sow discord in Jerusalem have made matters worse.

Turkey’s interest in repairing ties with the Jewish state are twofold: to break up the emerging alliance between Israel, Egypt, Greece and Cyprus in the gas-rich Eastern Mediterranean and to improve its standing in Washington.

But Ankara’s recent threats to block Sweden and Finland’s accession to NATO and to launch another invasion in northeast Syria against US-backed forces make it even less likely that the US Congress will ease its arms embargo on Ankara.

What’s next? Turkey is pushing Israel to revive a scheme to pump offshore Israeli natural gas through a proposed pipeline under the Mediterranean to Turkey. Erdogan has called gas cooperation “one of the most important steps we can take together for bilateral ties.” But experts believe it’s logistically too complicated and politically too fraught to be lucrative. Turkey is also hoping that Israeli prime minister Naftali Bennet will make an official visit to follow that in March by Israeli President Isaac Herzog.