Turkey’s Islamic-leaning Justice and Development Party government is demanding that both countries end their arms embargoes on Turkey over its military intervention in 2019 against the Kurds in northeast Syria. 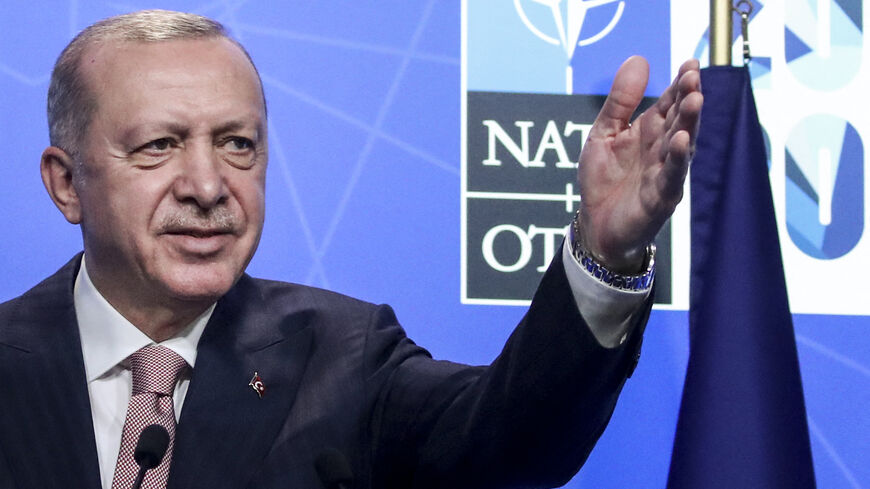 Tensions within NATO over Turkey’s demands for concessions from Finland and Sweden in exchange for backing the Nordic states’ membership of the Western alliance show no signs of abating, even as Western officials seek to play them down.

Sweden confirmed today that it is sending a delegation to Ankara to discuss its decision to formally apply for NATO membership in response to Russia’s invasion of Ukraine. The move is further evidence that Turkey’s objections have not been overcome.

Upping the ante, Turkey’s President Recep Tayyip Erdogan said today they “need not bother to come” unless military sanctions imposed by the Nordic countries on Turkey were rescinded.

“The crisis mode is confirmed,” a source with close knowledge of the discussions told Al-Monitor. The source said there were few signs, if any, that Turkey was ready to drop its demands that both countries cease what Ankara calls their support for “terrorists.” It is referring in particular to Kurdish groups sympathetic to imprisoned Kurdish leader Abdullah Ocalan and Pennsylvania-based Sunni cleric Fethullah Gulen. Turkey accuses Gulen of orchestrating the failed attempt to violently overthrow the government in 2016.

Turkey’s Islamic-leaning Justice and Development Party government is also demanding that both countries end their arms embargoes on Turkey over its military intervention in 2019 against the Kurds in northeast Syria. Turkey’s Foreign Minister Mevlut Cavusoglu said on Sunday that progress was being made with Finland on the issue but that Sweden was continuing to be “provocative.” He did not elaborate.

US Secretary of State Tony Blinken said he had spoken to Cavusoglu after a meeting of NATO foreign ministers that was held Sunday in Berlin, and he was confident that consensus could be struck. NATO Secretary-General Jens Stoltenberg said he was confident that “we will be able to address the concerns that Turkey has expressed in a way that doesn’t delay the membership or accession process.”

Turkey’s real beef is with Sweden, a long-time sanctuary for Turkish dissidents of all stripes since 1980 when Turkey’s generals carried out their last hard coup.

In Sunday’s meeting, Cavusoglu was described by the source as being “very tough.” Cavusoglu demanded that Sweden and Finland publicly acknowledge that there are links between Ocalan’s Kurdistan Workers Party (PKK) and the Syrian Kurdish groups running the autonomous region in northeast Syria that is protected by US special operation forces.

Cavusgolu singled out Sweden’s Foreign Minister Ann Linde and what he called her “so-called feminist policy.” It was an overt swipe at Linde’s overt embrace of the Syrian Kurdish leadership, which has strong female representation in keeping with Ocalan’s emphasis on gender equality.

Ilham Ahmed, the executive president of the Syrian Democratic Council, one of the main arms of the Syrian Kurdish administration, has met numerous times with Linde in Stockholm.

Britain’s Foreign Secretary Liz Truss pushed back “very hard” against Cavusoglu, saying the priority should be “to not send the wrong message to Russia.”

“Finland Sweden’s decision to seek NATO membership is a historic step. The position of Turkey and the Erdogan regime on this is frankly bizarre and not surprising,” said Feryal Clark, the first Kurdish Turkish member of the UK parliament for Labor and a member of the NATO Parliamentary Assembly. “It’s another example of Erdogan’s regime trying to further isolate and cut off support for Kurdish minorities,” she told Al-Monitor.

In 2020, Linde angered Cavusoglu by telling him that Turkey must withdraw from northeast Syria.

Ankara’s demands have struck a raw nerve in Sweden, a country that has long prided itself on putting human rights first in its foreign policy.

“Ankara’s statements do raise concern in Sweden, as they come at a time when the [ruling] Social Democrats have just taken a very difficult decision to change position on the question of NATO membership,” noted Paul Levin, director of Stockholm University’s Institute for Turkish Studies. Turkey’s demands of the Swedish government “hits right at the reason many on the left have been uneasy over NATO membership — the fear that Sweden would lose its voice on matters concerning human rights and democracy.”

“There is a great deal of sympathy for the Kurdish cause, especially on the left, and I think it will be difficult [for Sweden] to make any meaningful concessions,” Levin told Al-Monitor. And with elections looming in Turkey and Sweden alike, “There is a risk that a mutual inability to be seen as backing down could make for a difficult road ahead,” Levin added.

“The issue is serious,” concurred Aaron Stein, director of research at the Foreign Policy Research Institute, a think tank in Philadelphia. Stein sees parallels with Turkey’s reaction to US support for the Syrian Kurdish People’s Protection Units (YPG). Sweden’s “big sin,” he told Al-Monitor, is “that they adopted the same policy as the United States, which is that they view the YPG and the PKK as separate entities.”

Sweden is one of the first countries to have followed in Turkey’s steps, treating the PKK as a terrorist organization since the early 1980s. “They are using a strict interpretation of the law to facilitate a policy in Syria of using the YPG to go after the Islamic State,” Stein noted, much as the United States has done, leading to a meltdown in US Turkish ties.

This is hardly the first time that Erdogan is playing hardball with NATO. In 2009, Turkey withdrew its objections to the nomination of Anders Fogh Rasmussen, a former Danish prime minister, to lead the alliance only after the last-minute intervention by then-President Barack Obama. Turkey was opposed to Rasmussen because of his defense of free speech in the midst of the Danish cartoons crisis over depictions of the Prophet Mohammed that were deemed to be blasphemous.

In 2019, Turkey held up defense plans for the Baltic states and Poland, insisting that NATO needed to recognize the YPG as a terrorist threat and defend Turkey against it. “It took some bureaucratic chicanery to get that one through,” recalled Stein. This included greater Turkish representation in the higher echelons of NATO.

“Of course [the current crisis] probably will be worked out, but again, they made a spectacle, and in so doing, they undermined NATO solidarity at a time when two members want to join because they correctly fear Russian aggression. Turkey elevated its own security issues over those of the collective security of the alliance.”

Erdogan’s top foreign policy adviser, Ibrahim Kalin, has struck a more conciliatory tone than Cavusoglu, saying, “We are not closing the door. But we are basically raising the issue as a matter of national security for Turkey.”

Turkey is likely, yet again, to keep pushing for concessions until the NATO summit that is due to be held on June 30 and during which membership for Sweden and Finland is expected to be ratified.

In the meantime, “Most Swedes — both those informed on matters of foreign policy and regular people — primarily see Turkey as increasingly authoritarian and as a country that behaves both erratically and aggressively on the international stage,” observed Levin. “This just further cements that perception.” It will have done the same among many of Turkey’s other NATO partners as well.