The residents of Tadef in the Aleppo countryside are rejecting a military trench being dug by the Turkish army that would cross through their city, calling on changing its course and retaking control of the areas held by the Syrian government forces inside the city. 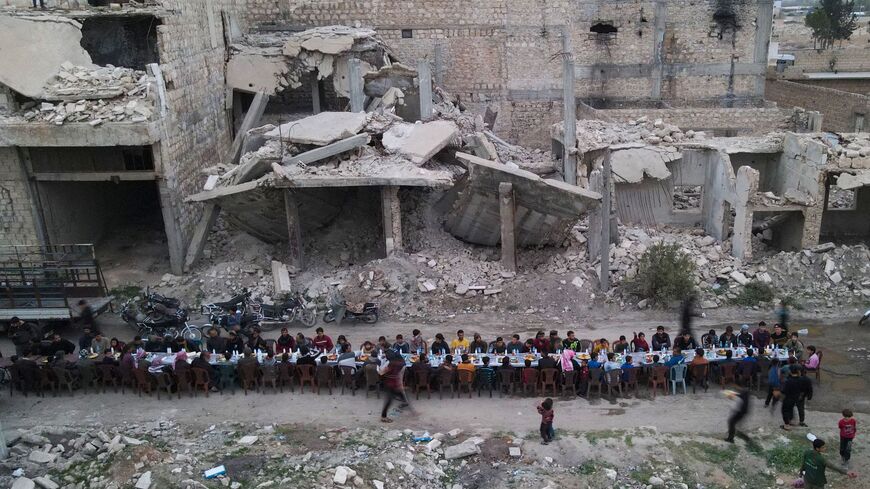 An aerial view shows Syrians sitting amidst the damaged buildings to break their fast during an iftar gathering organized by an NGO in coordination with various local factions in Tadef, near the border city of al-Bab, which is controlled by Turkish-backed rebels in Syria's eastern countryside of Aleppo province on April 18, 2022. - BAKR ALKASEM/AFP via Getty Images

ALEPPO, Syria — The Turkish army on May 21 withdrew excavation equipment from the vicinity of Tadef, in the northeastern countryside of Aleppo, after the city’s inhabitants objected to the digging of a military trench that would divide their neighborhoods and prevent some from reaching their agricultural lands in the city’s surrounding areas under the Syrian regime's control.

The residents argue that should the city be divided into two parts, they wouldn't be able to retake control of the surrounding areas held by the regime.

In early April, the Turkish army began digging the military trench in the territory separating the areas under control of the Turkish-backed Free Syrian Army (FSA) and areas held by the Syrian regime.

The excavation, which began from al-Sukaria area east of al-Bab and along the Aleppo-Hasakah international road, reached the outskirts of Tadef, specifically the town of Butushiya.

The trench is about 4 meters deep and 6 meters wide, with a 6-meter-high earthen berm erected on its southern side.

Before the digging reached Tadef, hundreds of the city’s inhabitants took to the street on May 13 in the surrounding areas to protest the excavation threatening their town.

They called on the FSA factions and the Turkish army to halt the digging until their demands are met, most importantly changing the trench’s course away from the city so it does not cut through one inch of their land.

The protesters also called for the liberation of the remaining part of the city of Tadef and the agricultural land controlled by the Syrian regime.

On the same day, demonstrators pitched a sit-in tent near the excavation equipment and machines in the town of Butushiya, threatening that they would not back down until their demands were met. The sit-ins were widely backed by clans who also took part in them.

The city of Tadef falls near al-Bab. In 2017, the Turkish army and its allied FSA factions took control of part of the city during Operation Euphrates Shield launched by the Turkish army against the Islamic State.

At the time, Syrian regime forces also took hold of the city’s southern parts and large swathes of its land.

Since 2017, the city’s neighborhoods have turned into a frontline between regime forces and FSA factions, which divided the city into two parts.

The people in the regime-controlled areas abandoned their houses and moved to FSA-held land where some 2,500 families live mainly in the northern side of the city, which is relatively far from the lines of contact with regime forces.

Muhammad Ghanoum, a journalist and one of the participants in the sit-in in Butushiya, told Al-Monitor, “The trench does not take into account the interests of the city’s residents and lies at no more than 1 kilometer away from the demarcation line with regime forces, which will cause the people of Tadef to lose more of their neighborhoods and land to the benefit of the regime forces.”

“This is why the townspeople decided to turn the protest into an open-end sit-in after having sensed the danger of this trench and the implausible justifications of the Turkish army. This had indeed led to halting the excavation operations on May 17, and on May 21, the heavy equipment and vehicles were cleared from the site. This, however, does not mean the digging was completely canceled,” he added.

Ghanoum said, “Some of Tadef’s notables spoke to a Turkish officer during a meeting that brought them together at the Turkish military base near the city. They have been told that the trench was being dug under a Turkish-Russian agreement dating back to 2017, which is being implemented now, without disclosing the details of the deal.”

Meanwhile, a military source in the FSA told Al-Monitor on condition of anonymity, “The goal of digging the trench is to prevent smuggling operations and limit security breaches on the part of the regime forces, in addition to strengthening the area’s military defenses in the face of Bashar al-Assad’s troops. Also, the trench would contribute to stabilizing the lines of control and the area that Turkey intends to make a destination for Syrian refugees returning from [Turkish] territories.”

According to a May 19 statement by the sit-in group, which is led by the Council of Notables of Tadef, the opposition-controlled part of the city is estimated at approximately 70% of the total area of the city, inhabited by approximately 20,000 people, who constitute some 2,500 families distributed in the city and its nearby farms.

The statement added that should the Turkish army continue digging the trench, a possible humanitarian catastrophe could befall the people, because this would mean that the liberated parts of Tadef and its farms would be cut off from the city and handed over to the regime, which would further deepen the displacement burdens on people.

The statement called on diverting the trench route toward the southern part of the city in order to preserve people’s properties and ensure the return of the largest number of displaced to the area.

According to one of the city’s notables who spoke to Al-Monitor on condition of anonymity, “Completing the digging of the trench will cause the displacement of about 2,000 families residing in the city. The trench will cut through this area that is under the FSA control and which will end up under the regime’s control. This would prompt the people living there to cross to the other side to the FSA-held part.”

The city’s dignitaries who are taking part in the sit-in said that they were not sure whether the Turkish army has actually canceled the digging operations or just changed its course. They added that should the operations resume, they will be ready to return to their protests.