Turkish government persistence on not removing the live music ban draws outcry from the entertainment and music industry. 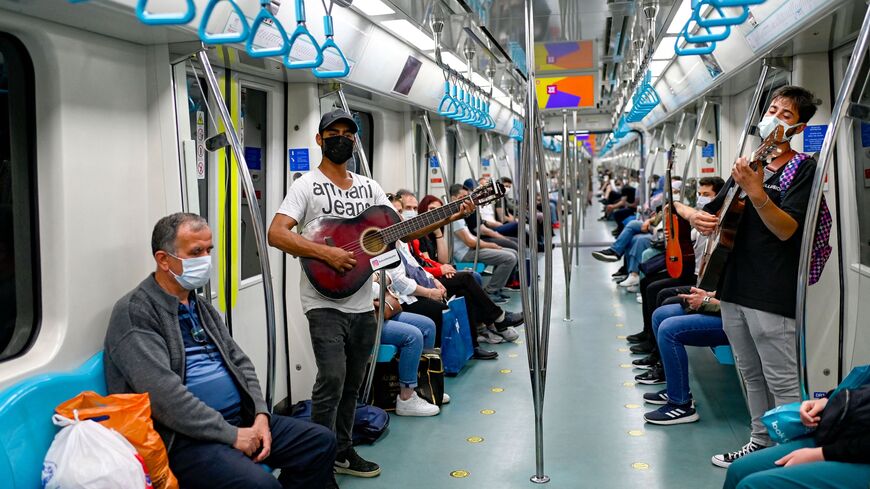 Amateur musicians play in the Istanbul metro during the performance ban due to COVID-19 in Istanbul on June 9, 2021. Bars and restaurants have reopened as Turkey pulls out of the pandemic's third wave, but musicians feel unfairly singled out. - YASIN AKGUL/AFP via Getty Images

Almost all COVID-19 restrictions have been lifted in Turkey, with one striking exception: the live music ban after midnight, fueling outcry from workers in the music and entertainment industry.

Popular singers — including, for example, Demet Akalin, who has some 6.7 million followers on Twitter — are keeping the ban under the spotlight, directly pleading with Erdogan to lift the ban. Akalin and other musicians have expressed their complaints of financial losses during the pandemic.

In response to growing outcry, the Interior Ministry announced May. 10 that live music would be permitted until 1 a.m. instead of midnight, but the move has failed to meet the expectations of the industry.

Lifting the ban seems like a far prospect given Turkish President Recep Tayyip Erdogan’s stance on the issue. Speaking on the issue in April of last year, Erdogan said, “No offense, but no one has the right to disturb others at night time.”

At a time when Ankara is counting on tourism income amid skyrocketing inflation, the ban is "like a death penalty to the entertainment industry, which employs over 5 million people,” said one businessman who asked to remain anonymous. It affects musicians but also several other entertainment industry sectors such as employees in hospitality, makeup, costume design and others.

So why does the government insist on this counterproductive ban?

According to anthropologist and journalist Ayse Cavdar, the ban is a “form of symbolic violence.” Speaking to Al-Monitor, Cavdar argued that the ban signals a message to the secular groups that do not align with Erdogan’s policies: “This is the consequence of your choices.” Insistence on a music ban, Cavdar said, also turns up the financial pressure on the entertainment industry.

Musicians have had a tough time understanding the reasoning behind the arbitrary ban. According to classical and contemporary music composer Ibrahim Yazici, “The music ban is one of the least meaningful precautions against the pandemic.”

“It seems that the biggest supporter of this ban is the president, and probably he is the one who recommended it,” Yazici told Al-Monitor, criticizing Erdogan’s justification of the ban. “Music is not noise. Noise pollution should be regulated, but this cannot be done by banning music,” he added.

Yektan Turkyilmaz, an anthropologist at the Center for Eastern Mediterranean Studies at the Central European University in Vienna, also questioned the motive behind the ban.

“This ban in Turkey is not really about music; rather, it is a ban on gathering. There are public spaces that Erdogan’s regime is concerned about —for example, bars,” Turkyilmaz told Al-Monitor. “These are the cultural antithesis to what Erdogan stands for; places he knows people are mostly critical of him. Next, there is a social class aspect. These bans are applied to middle and upper-middle groups; they are the ones going to bars or concerts after midnight mostly. Music could generate potentially dangerous messages. Last, Erdogan must now be thinking the time is ripe to alter the cultural codes of Turkey.”

Salih Can Aciksoz, anthropology professor at UCLA, concurs. “AKP’s midnight music ban has been criticized as the latest example of the Islamist conservative encroachment on secular lifestyle in Turkey,” he told Al-Monitor. “This observation definitely has merit. All around the world, the COVID-19 pandemic has been used as a pretext to justify state intervention and carry out controversial policies such as refugee or protest bans under the banner of public health. The AKP government too has been wielding pandemic measures to shape society according to its own ideological propensities.”

“The emphasis on religiously inflicted conservatism should not prevent us from seeing how this ban also reflects the exigencies of an increasingly authoritarian regime that aspires to discipline society and create a docile citizenry. Such disciplining is especially directed at the youth, which, according to President Erdogan, should be re-educated as pious and vindictive on the one hand and native and national on the other,” he added.

Aciksoz stressed that “when and what kinds of noises get to be interpreted as public disturbance constitutes the crux of cultural politics.” A suhoor gathering by the ruling Justice and Development Party in April during Ramadan could be seen as a case in point. Footage from the gathering showed men and women eating together with accompanying live music.

The music ban isn’t really about music at all. The ban is designed to penalize businesses that fail to fall in line with the government and control gatherings that might be unsavory.