Qatar seeks to export natural gas to Germany by 2024

Germany wants Qatari gas as an alternative to Russia’s due to the invasion of Ukraine. 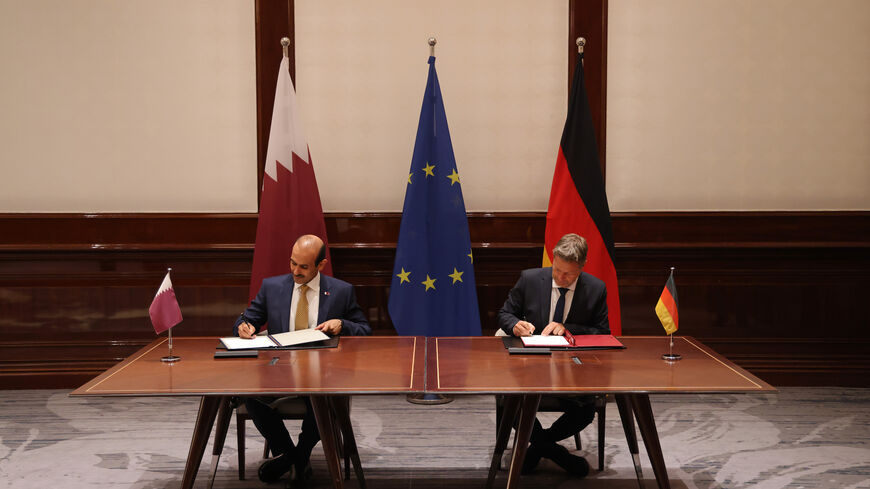 German Economy and Climate Action Minister Robert Habeck (R) and Qatar Minister for Energy Saad Sherida Al-Kaabi sign an agreement on an energy partnership between the two nations on May 20, 2022, in Berlin, Germany. Germany has turned to Qatar to buy large quantities of liquified natural gas as it seeks to ween itself off its previous heavy dependency on natural gas imports from Russia. - Sean Gallup/Getty Images

The German news outlet Handelsblatt published an interview with Qatari Emir Sheikh Tamim bin Hamad Al Thani today. In the interview, Thani said that they want to begin exporting gas to Germany as early as 2024 via the Golden Pass liquified natural gas terminal in the US state of Texas. The state-owned QatarEnergy holds a 70% stake in the terminal.

Why it matters: Exporting Qatari gas to Europe has been in the works for some time. Anticipating a war in Ukraine, the Biden administration pushed Qatar in January to consider routing its gas to Europe as an alternative to Russian gas.

Germany, which is heavily dependent on Russian gas, held talks with Qatar shortly after the February Russian invasion on importing Qatari gas.

Qatar is one of the largest gas exporters in the world. Russia provides Europe with around 40% of its gas.

Know more: Several Middle Eastern states are considering exporting gas to Europe as they attempt to reduce their energy dependence on Russia. The Kurdistan Regional Government of Iraq has offered to export gas to Europe. Israel and Turkey have also been linked to potential gas exports to the continent.