Amid public outrage at a performance by an Israeli orchestra in Cairo, Egyptian authorities have stressed the event did not take place within the Giza Pyramids complex. 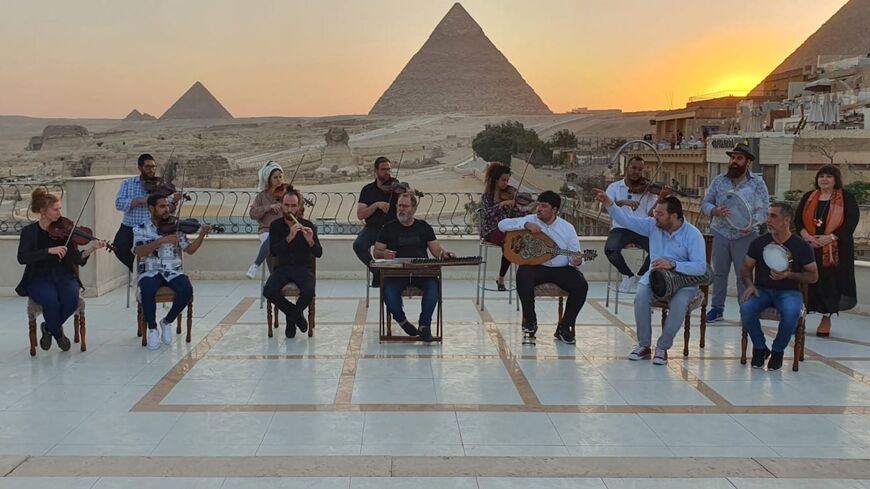 The Firqat Alnoor orchestra performs at a venue overlooking the pyramids in Cairo, Egypt, May 24, 2022. - Firqat Alnoor

CAIRO — An Israeli orchestra recently performed near the pyramids of Giza in Egypt, as part of the celebrations to mark Israel’s 74th Independence Day in Cairo. The Firqat Alnoor orchestra posted photos of the May 14 performance with the Pyramids of Giza and the Great Sphinx in the background. In its Facebook post, the orchestra described the Egyptian audience at the event as “brothers."

Many Egyptians and Arabs denounced the event on social media as scandalous, saying that it did not befit Egypt. Several Arab media outlets also criticized the event.

Conductor Ariel Cohen told Israel’s Kan public radio station that performing in Cairo was a dream come true. “I couldn’t believe it … I couldn’t hold in my tears,” he added.

The musicians documented the trip on Facebook. The orchestra shared its members' joy, pride and excitement upon setting foot in Cairo and performing for the Egyptian diplomatic corps and others. They expressed gratitude for the opportunity to represent their country in one of the most important countries of the Arab world.

“We were honored to be the only Israeli orchestra that came to Egypt after 40 years,” it added.

The orchestra also performed in cafes in Cairo and on a Nile boat, and posted a photo of its members in front of a statue of renowned Egyptian singer Umm Kulthum.

However, Egyptian authorities have pointed out that the Israeli band did not perform inside the Giza Pyramids complex.

Secretary-General of the Supreme Council of Antiquities in Egypt Mustafa Waziri said in a May 27 statement that floor visible in the photos shows that the event was held inside a hotel near the pyramids and not inside the pyramid complex.

Ashraf Mohieeddine, director of the pyramids archeological area, told Al-Monitor via phone that the Israelis did not get a permit to enter the complex as social media posts suggested. He explained that the pyramid area includes many hotels and restaurants with a view of the pyramids and suggested that the band may have performed on one of the hotels’ rooftops.

Some Jews believe their ancestors built the Giza Pyramids during the pharaonic period. As Israeli prime minister, Menachem Begin said as much when he visited Egypt after the signing of the peace agreement in 1978. Many Egyptian archaeologists and scholars deny the claim and some accuse Israel of trying to rewrite Egyptian history.