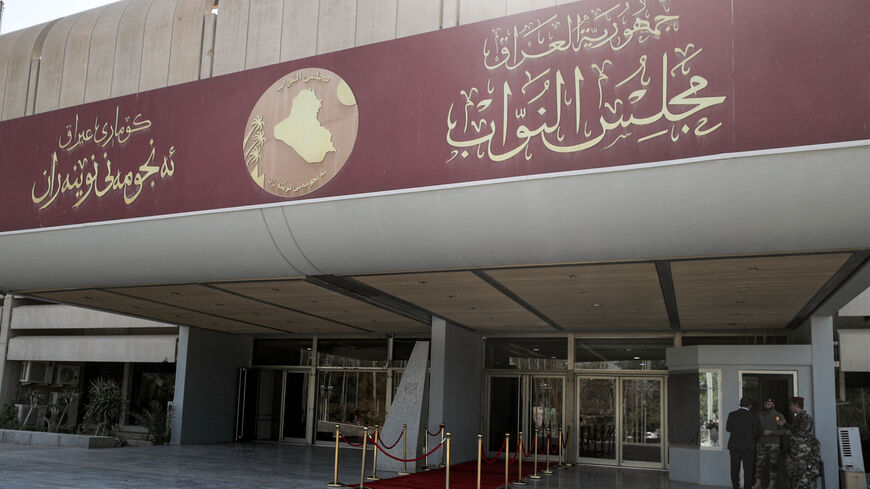 This picture taken on March 26, 2022, shows a view of the exterior of Iraq's Council of Representatives, the country's unicameral legislature, in Baghdad's heavily fortified Green Zone. - AHMAD AL-RUBAYE/AFP via Getty Images

WASHINGTON — Iraq's parliament passed a bill on May 26 criminalizing normalization and any cooperation or activities involved with Israel. It received widespread support, with 275 out of 329 lawmakers voting in favor of the law:

The law applies to all Iraqis, individuals and state organizations including the president, prime minister, parliament speaker and head of the judiciary. It also applies to Iraqi and foreign media and all companies working in Iraq regardless of citizenship.

The law was welcomed and praised by the Popular Mobilization Units (PMU) and militias, especially those allied with Iran, many of which published statements and tweets thanking Iraqi populist cleric Muqtada al-Sadr for this initiative.

The law has been a boost for Sadr among those militias and parties that have been unable to form a new government.

Sadr had joined parliament speaker Mohammed al-Halbusi's Sovereignty Alliance and the Kurdistan Democratic Party, aiming to form a majority government, but they have failed so far due to a lack of enough members to select the president, which requires two-thirds of parliament members.

On the other side, militias are gathered under the Coordination Framework umbrella with Nouri al-Maliki’s State of Law, Haider al-Abadi’s Nasr coalition and Amar Hakim’s Hikmah bloc, demanding participation in the new government as a consensual government.

The dispute has led the country to a political deadlock.

But the recent Sadr move might serve to push the process forward, encouraging some of the militias to join Sadr in his campaign of forming a majority government.

Nonetheless, the move into the anti-normalization camp has been poorly received in the West and contrasts with those countries that have ties with Israel, including Egypt, Jordan, the United Arab Emirates, Morocco and Bahrain.

Sadr has been able to portray himself as independent, anti-militia, patriotic and against Iran's influence in Iraq, leading many Western commentators and analysts to present him as a possible partner for the West — or at least someone who was not inclined to do Tehran's bidding.

Sadr, whose party holds the most seats in parliament, has also been campaigning for another law in parliament criminalizing homosexuality.

The United States Department of State was quick in reacting to the "anti-Israel" bill, considering it an act of “jeopardizing freedom of expression and promoting an environment of antisemitism,” expressing that the United States is “deeply disturbed” by this law and warning that it “stands in stark contrast to progress Iraq’s neighbors have made by building bridges and normalizing relations with Israel, creating new opportunities for people throughout the region.”

The United Kingdom’s Minister of State for Asia and the Middle East Amanda Milling also condemned the law as “appalling,” urging “the Iraqi authorities to repeal this law at once” and calling it an “antisemitism act” that must be stamped out in all its forms.”

While Israel is not top of mind for most Iraqis, and widely ppose the occupation of the West Bank and Gaza, others questioned why this issue was considered a priority given Iraq’s other, more pressing needs.

Foreign companies and nongovernmental organizations working in Iraq are also uneasy about how the law would affect them, as many may have other relationships with Israel.