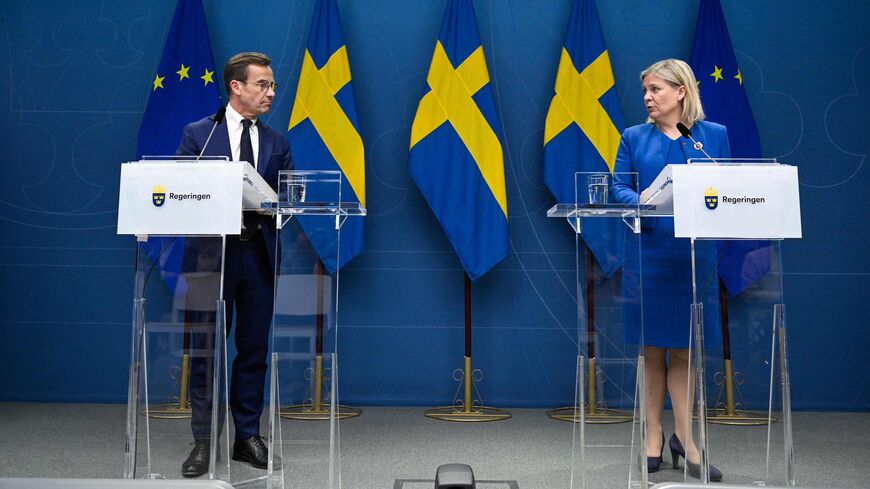 Turkish President Recep Erdogan threatened to veto Finland and Sweden’s bid for NATO membership last week. Europe is at one of its most critical junctures in modern history as the West tries to consolidate its defense against Moscow after Russia’s invasion of Ukraine.

“We are following developments regarding Sweden and Finland, but we don't hold positive views," Erdogan told reporters as he was leaving Friday prayers May 13. “These countries have almost become guesthouses for terrorist organizations. … It is not possible for us to be in favor," he added.

Erdogan was referring to political and fundraising activities in Sweden and Finland by groups sympathetic to the Kurdistan Workers Party (PKK) and its northern Syrian affiliate the People's Protection Units (YPG). Ankara considers both groups Kurdish terrorist organizations and wants the West to ban all activities by any organization that displays sympathy for these groups but has had limited success.

The countries involved often respond by pointing out that their laws do not permit them to prevent nonviolent activities on their soil by pro-Kurdish groups.

Erdogan remained defiant on Monday, repeating once again that Ankara would not accept these countries in NATO because they have not taken a clear stand against terrorist groups. “We cannot say yes to their joining NATO, which is a security organization,” he said during a press conference with Algerian President Abdelmadjid Tebboune in Ankara.

The United States and European Union have designated the PKK as a terrorist organization but refuse to do the same for the YPG, which they support financially and militarily.

Ankara also accuses the West of embracing followers of the US-based Sunni cleric Fethullah Gulen. It says members of this group — which it calls the Fethullah Gulen Terror Organization or FETO — masterminded the 2016 coup attempt against the Erdogan government. Many alleged FETO members have been granted refuge in the West.

The crisis Erdogan has precipitated within NATO has raised eyebrows not just in Europe but also in Turkey. Many former Turkish diplomats and veteran foreign policy analysts have criticized Erdogan’s move for its timing and the manner in which it was brought up. They believe Erdogan is attempting to cash in on Turkey's renewed strategic importance for the West after the invasion of Ukraine and force Finland and Sweden to comply with his demands.

All decisions within the alliance, including the admittance of new members, require a consensus and therefore a green light from Turkey. Western diplomats are working behind the scenes with Ankara to overcome the roadblock, which they fear is undermining the alliance and serving Russia’s interests.

Despite the hard line he pursues in international affairs, Erdogan has often been forced to backpedal on issues after his diplomatic missteps gained Ankara little and increased its international isolation. His efforts to mend fences with the UAE, Israel and Saudi Arabia are the latest examples. Domestic critics note that Erdogan is now trying to embrace these countries after vilifying their leaderships from his Islamist and pro-Muslim Brotherhood perspective. For this reason, they believe his threat to veto Finland and Sweden’s NATO bids will also amount to little in the end.

Nevertheless, retired Ambassador Oguz Demiralp thinks that Erdogan has chosen a course that is highly risky for Turkey. He wrote in an article for T24, “Appearing to be a spoiler at a time when the West’s desire to consolidate itself against Russia is so tangible is not the correct policy.” He went on to point out that Turkey’s place in NATO and other Western organizations is already a topic of debate.

Ankara should be mindful not to present a negative image as its ties with the West have seen some improvement due to the war in Ukraine, Demiralp argued, writing, “Such a position will bring nothing while what it takes away will be much.”

These sentiments were echoed by Namik Tan, a former ambassador to Washington who is also retired. Tan believes that the main target of Erdogan’s veto threat is the United States, which is the principal sponsor of the YPG in northern Syria. He tweeted, “Such bargaining in an organization that you are an equal member of should be conducted with a positive emphasis, in an intelligent manner and within the context of existing processes,” adding, “Explicit defiance may not bring what you expected while you end up with unexpected losses with your words amounting to nothing in the end.”

Many also recall Turkey’s failed 2009 attempt to block former Danish Prime Minister Anders Fogh Rasmussen from becoming NATO’s secretary general. Ankara objected to Rasmussen because the pro-Kurdish Roj-TV was based in Denmark. Under pressure from its allies, Turkey ultimately accepted Rasmussen’s election even though Denmark refused its demands. Roj-TV was eventually shut down in 2010 after the Danish attorney general indicted it for violating the country’s anti-terrorism laws.

Analysts are also concerned that Erdogan has chosen a hazardous course when it is not clear what Turkey’s place will be in the new international order that shapes up following Russia's invasion of Ukraine.

Many wonder why Erdogan upped the ante in such a public and abrasive manner when he is so likely to back down in the end in return for some palliative assurances from NATO that will fall far short of meeting his initial demands.

Foreign policy analyst Barcin Yinanc believes his position has more to do with domestic politics than foreign policy. She wrote in her column in T24, “Everyone is aware that Turkey has entered the election season and that Erdogan will create artificial crises in foreign policy in an attempt to reach out to his dwindling electoral base.”

“Turkey could have played its hand better,” she declared, pointing at the positive press Ankara had gained in the West over its position in the war in Ukraine. "This is what you call giving away with one hand what you gained with the other.”

Erdogan’s chief foreign policy adviser Ibrahim Kalin tried to take the edge off Erdogan’s remarks by striking a more conciliatory tone in an interview with Reuters. He commented, "We are not closing the door [on Finland and Sweden]. But we are basically raising this issue as a matter of national security for Turkey,” adding, “If they have a public concerned about their own national security, we have a public that is equally concerned about our own security. We have to see this from a mutual point of view.”

Despite the frosty relations between Ankara and Washington due to a host of differences, the Biden administration — which is highly supportive of Finland and Sweden’s NATO membership — has chosen a restrained tone in its response to Erdogan. Analysts attribute it to the expectation that Ankara eventually toe the line.

Talking to reporters after the meeting of NATO foreign ministers in Berlin over the weekend, US Secretary of State Antony Blinken — who also met with Turkey’s Foreign Minister Mevlut Cavusoglu — was circumspect, saying, "I don't want to characterize the specific conversation that we had either with the foreign minister or within the NATO sessions themselves, but I can say this much: I heard almost across the board very strong support [for Sweden and Finland] joining the alliance."

A Western diplomatic source said the message in Blinken’s remarks was clear. The source, who wished to remain anonymous, told Al-Monitor, “If Turkey insists on its threat, then it will find itself isolated in the alliance. This will not be in its short, medium or long-term interests.” The source added, however, “Erdogan is known to be single-minded and erratic and may choose to go down the path of his choice despite knowing full well that he is walking into a blind alley.”