The Australian golfer, who now heads a Saudi-funded golf league, said he does not answer to the Saudi government and condemned the murder of Jamal Khashoggi in a recent interview. 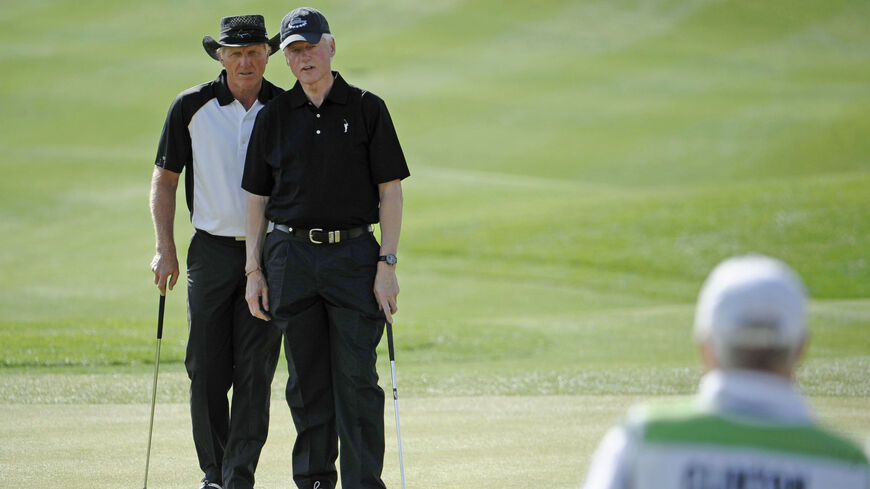 Former President Bill Clinton, right, and Greg Norman of Australia line up a putt at the Palmer Private Course at the PGA West during the third round of the Humana Challenge in partnership with the Clinton Foundation golf tournament on Jan. 21, 2012, in La Quinta, California. - Denis Poroy/Getty Images

Australian golf superstar Greg Norman opened up about his relationship with Saudi Arabia in a recent interview.

Norman leads the Super Golf League, which is funded by the Saudi sovereign wealth fund via LIV Golf Investments. The league aims to compete against the PGA Tour, which is the dominant gulf competition in the United States. Norman has been a longtime critic of the PGA’s restrictions on players, finances and more.

Golfers who are considering playing in the Saudi-funded league have been criticized in Western media for participating in the “sportswashing” of the kingdom’s human rights abuses.

Norman addressed these concerns in an interview with Sky Sports yesterday, specifically the murder of Saudi columnist Jamal Khashoggi in 2018.

“It's reprehensible what happened with Khashoggi,” Norman told the outlet. “But if you go back into Saudi Arabia, they're making a cultural change from within to change that. They don't want to have that stigma sitting over there.”

Norman went on to say that the Saudi government does not exercise control over him.

“I don't know what the Saudi government does. I don't want to get into that. Every country has a cross to bear,” he told Sky Sports. “They're not my bosses. We're independent. I do not answer to Saudi Arabia.”

Norman added that Saudi Crown Prince and de-facto ruler Mohammed bin Salman is not on the board of LIV Golf Investments.

Know more: The Super Golf League received a major setback yesterday when the PGA Tour denied the release requests of many top golfers who wanted to play in the league’s first tournament in London next month. The league has gained momentum recently, with many top golfers expressing interest, including Phil Mickelson, Lee Westwood and Sergio Garcia. One motivation is the millions of dollars in guaranteed money the Super Golf League is offering. The PGA Tour does not offer guaranteed money.

The league has been mired in controversy for some time over Saudi Arabia’s human rights record. In February, comments made by Mickelson surfaced in which he called Saudi Arabia “scary,” citing the execution of gay people in the Gulf state.

Mickelson has been a major proponent of the Super Golf League due to his longstanding beef with the PGA Tour. Among other issues, Mickelson is critical of the tour’s control over players’ archival footage and profit sharing with athletes. Mickelson said in the interview that “Saudi money” provided the necessary “leverage” to force the PGA Tour to change.