The Iran nuclear deal may be facing "last bullet" with no deal in sight on IRGC. 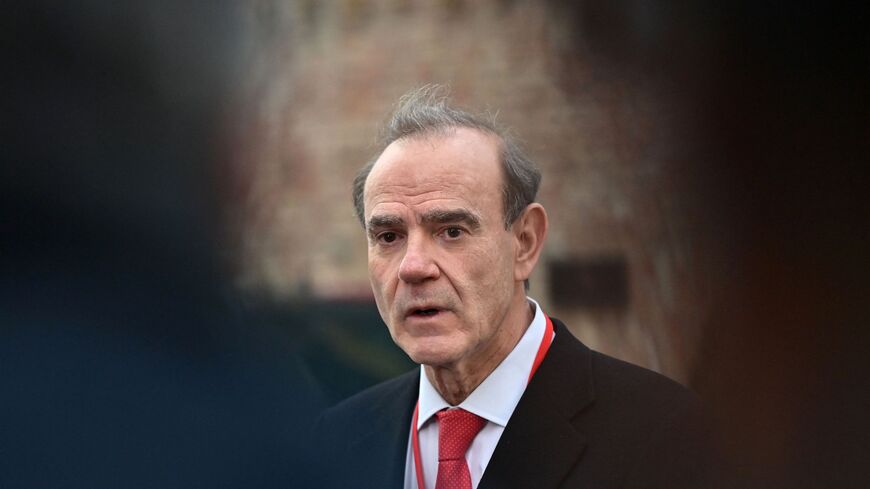 Deputy Secretary General of the European External Action Service (EEAS) Enrique Mora speaks to journalists in front of the Coburg palace after a meeting of the Joint Comprehensive Plan of Action (JCPOA) in Vienna on Dec. 3, 2021. - JOE KLAMAR/AFP via Getty Images

TEHRAN — A few months ago in Vienna, observers were anticipating a signing ceremony for a revival of the Iran nuclear deal, formally known Joint Comprehensive Plan of Action (JCPOA).

The so-called P5+1 countries, minus the US, which was not in the room but at the center of the action, had to reconnect the lines that former US President Donald Trump cut when he announced his country's exit from the nuclear agreement in May 2018.

On Wednesday, the EU’s chief negotiator, Enrique Mora, met Iran’s Deputy Foreign Minister Ali Bagheri Kani in Tehran to listen to new developments after his last trip in March, the last previous shuttle exchange, when he carried some Iranian answers to Washington.

He reportedly is carrying no message from Washington. The buzz is he is in town because of an Iranian invitation. If so, it’s hard to believe he would either arrive or leave empty-handed, if the Iran deal is to have a pulse.

Prior to Mora’s trip, EU foreign policy chief Josep Borrell declared that the visit is "the last bullet" for breaking the deadlock.

What Mora likely does not have is a clear-cut workaround on if or how the US would remove Islamic Revolutionary Guards Corps (IRGC) from the foreign terrorist organizations list and lift the US sanctions.

Mora offered to explore the possibility of removing the IRGC from the list, but not the Quds force, but that seems out of the question, at least for now.

The EU official flew to Tehran from Doha. US Deputy Secretary of State Brian McKeon also spent May 9-10 in Doha to discuss Washington's priorities in the region and other matters, according the Department of State. McKeon is described as very close to Secretary Antony Blinken, and is one of the longest serving among President Biden’s national security inner circle.

It is not known whether Mora's stop in Doha and McKeon’s visit are linked.

On the flight from Doha to Tehran, I encountered Mora alone, trying to put his papers in order. I asked him if he's carrying a message to the Iranians from Washington, but he denied that he was. “I was invited by Iranian officials and am traveling to Tehran to listen to what they have to offer, and whether they might have any thing to offer,” he told Al-Monitor.

On the issue of removing the Revolutionary Guards from the list of foreign terrorist organizations and lifting the US sanctions, Mora affirmed “US officials made it clear that option is no longer considered for the time being.”

In parallel, another flight from Doha is attracting attention. The Emir of Qatar, Sheikh Tamim bin Hamad, is arriving in Tehran on Thursday, May 12, and the timing sheds great light on the effort made by Doha to reconcile the United States and the Islamic Republic.

There are speculations on whether the emir could push forward some arrangements that may help revive the nuclear agreement.

It is not known what Qatar has in store, but it is certain that Doha has a real interest in creating a space for dialogue between two opponents with whom it has good relations.

On Tuesday, the Qatari-owned Al Araby Al Jadeed reported that Iranian President Ebrahim Raisi is set to visit Oman. The report came after an Iranian Foreign Ministry spokesman had confirmed the president has plans to visit two Persian Gulf countries.