King Abdullah is also expected at the Pentagon later this week. 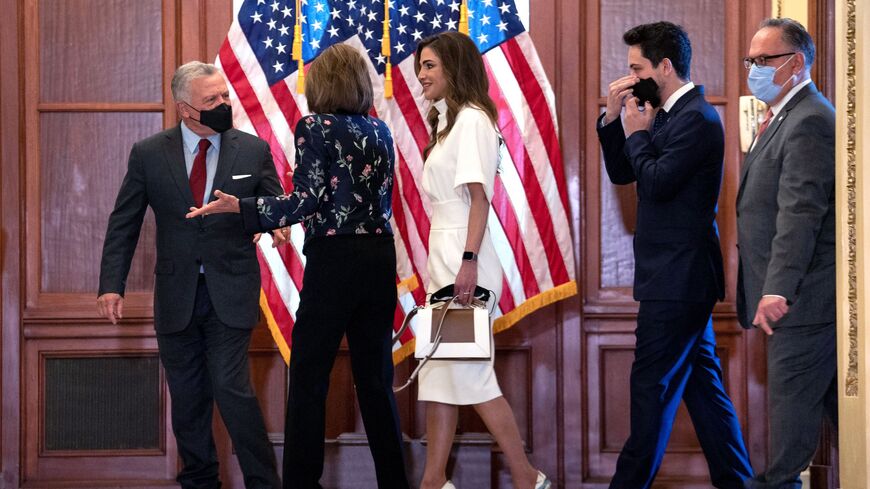 Jordan's King Abdullah II, US Speaker of the House Nancy Pelosi, Queen Rania, Crown Prince Hussein and others walk to a meeting on Capitol Hill on July 22, 2021, in Washington, DC. - BRENDAN SMIALOWSKI/AFP via Getty Images

US President Joe Biden will host Jordan’s King Abdullah II at the White House this week, a source familiar with the planned meeting told Al-Monitor on Monday.

King Abdullah is also scheduled to meet with US lawmakers and top defense officials at the Pentagon later this week, Al-Monitor has learned. The Jordanian monarch is visiting the United States with his wife, Queen Rania, and a delegation of advisers.

Their state visit kicked off in Florida last week when Abdullah met with the top commanders of all US military forces in the Middle East, Gen. Michael Kurilla, and of US Special Operations Forces, Gen. Richard Clarke, at MacDill Air Force Base on Friday.

The context: The Biden administration is seeking to build further ties with the Hashemite Kingdom, a top ally of Washington’s in the Middle East.

The kingdom, long seen by US policymakers as a pillar of stability in the Levant, has grappled with economic downturn and high-profile political intrigue in recent years. The Jordanian government is pursuing economic reforms backed by the International Monetary Fund amid an economic downturn exacerbated by the coronavirus pandemic.

“In light of ongoing regional unrest, as well as global disruptions stemming from the COVID-19 pandemic, the United States has helped Jordan maintain its stability and prosperity through economic and military assistance and through close political cooperation,” read a fact sheet published on the State Department’s website last month.

What’s next: The two governments reached a nonbinding $6.375 billion foreign assistance agreement in 2018, which expires next year. Abdullah may discuss renewal of the agreement with US officials in Washington this week, a former US official familiar with the matter told Al-Monitor.

The issue of security at Jerusalem's holy sites is also likely to come up, Haaretz reported. The king’s visit follows a series of confrontations between Israeli security forces and worshippers over Al-Aqsa Mosque complex, leading to a spike in tensions between Israel and Hamas.