King Abdullah will visit Washington for the first time in two years and is to meet with US President Joe Biden on July 19. 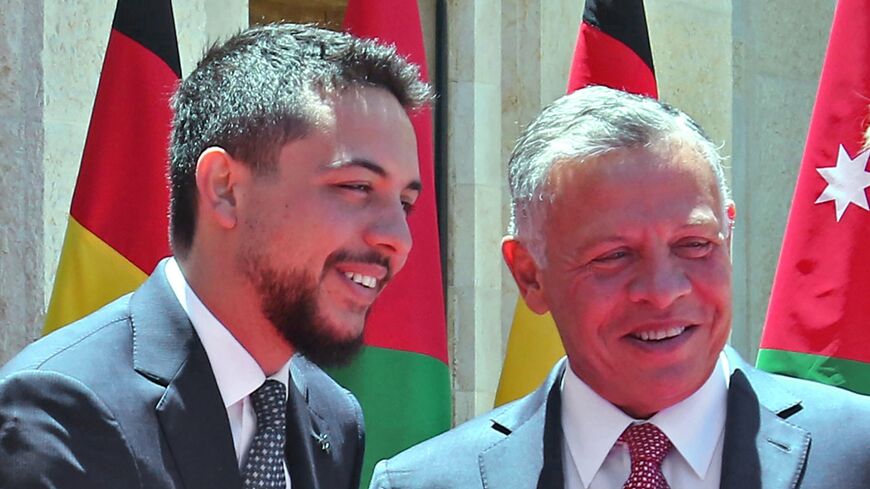 Jordanian King Abdullah II (R) and his son Crown Prince Hussein bin Abdullah welcome German Chancellor Angela Merkel (not seen) at the Jordanian Royal Palace in Amman on June 21, 2018. The king and his son are traveling to Washington this month; Abdullah is to meet with President Joe Biden on July 19, 2021. - (Photo by Khalil MAZRAAWI / AFP) (Photo credit should read KHALIL MAZRAAWI/AFP via Getty Images)

US President Joe Biden will host Jordan’s King Abdullah II at the White House on July 19 as the king faces increasing domestic pressures at home.

The visit, Abdullah’s first during the new US administration, comes just three months after Jordanian authorities arrested the king’s half brother, Prince Hamzah, in response to an alleged plot to seize power.

Abdullah’s wife, Queen Rania, and their son Crown Prince Hussein will also travel to Washington. The visit will “highlight the enduring and strategic partnership between the United States and Jordan, a key security partner and ally of the United States,” the White House said in a statement Wednesday.

In addition to security and political cooperation, the White House said Biden aims to work with Abdullah on “the promotion of economic opportunities that will be vital for a bright future in Jordan.”

Jordan’s economy, already stagnating before the COVID-19 pandemic, worsened over the past year, with unemployment reaching 24.7% and youth unemployment hitting 50% late last year.

Abdullah ordered the creation of a political reform commission last month at a time of mounting popular  frustration with the economy.

More recently, discontent over Israel’s conflict with Palestinian groups in Gaza roused protests in Amman. Nearly half of the Jordanian public is of Palestinian descent.

Abdullah’s visit comes as both countries look to turn the page on the Benjamin Netanyahu-era in their relations with Israel. Prime Minister Naftali Bennett was sworn in June 13.

The Biden administration appears keen to reset ties with Jordan after relations cooled during the Donald Trump presidency. Abdullah was the first Arab leader to object to the Trump administration’s so-called “deal of the century” in which Trump advisers proposed allowing Israel to annex swaths of Palestinian territory as part of a bid to resolve the Israel-Palestinian conflict.

Jordan’s state security court, which has been holding a closed trial on sedition charges, is expected render a verdict in the case against a former senior official and a member of the royal family July 14. Former Crown Prince Hamzah is not facing charges.

US Secretary of State Antony Blinken visited Jordan on the final leg of his diplomatic tour of the region in May following the cease-fire between Israel and Gaza.