Small grocery shops are a lifeline for Tunisian communities and families and one entrepreneur sees them as agents of change to a cash-free economy. 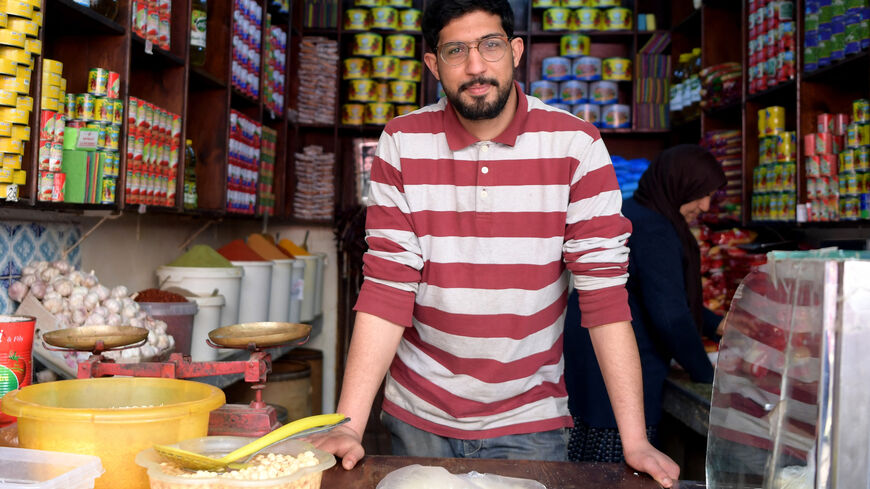 Tunisian grocer Bilel Jani is pictured at his grocery store in Halfaouine, a popular district of Tunis, on Feb. 15, 2022. - FETHI BELAID/AFP via Getty Images

Attars are suburban Aladdin’s caves. Their shelves groan under every kind of canned and dried food and rainbow bottles of cleaning products. Their tills are circled with vats of olives in brine, fresh homemade harissa and piles of sticky pastries and chocolate. They sell cans of tuna bigger than one's head and single triangles of cheese or one cigarette to the desperate.

Such traditional retailers make up around 56% of Tunisia’s retail sector, according to market research company Euromonitor’s report from 2020. They’ve weathered competition from big supermarket chains to remain cornerstones of their communities.

However, behind the smiles and cheery greetings at the local shops lies the stressful reality of bullying suppliers, rising prices and narrowing profit margins. A local shopkeeper in Tunis told Al-Monitor on the condition of anonymity, “The prices keep going up. We had three price increases in 15 days, but even as the prices go up our profit margins decrease.”

Tunisia has long suffered from supply fluctuations due to a supply chain complicated by dwindling currency reserves and a highly convoluted rent-based economy. It has been further aggravated by disruptions in the global supply chain by a variety of factors such as the pandemic, the shipping crisis and most recently the Ukraine-Russia war, but life goes on and people need to go shopping.

Fares Belghith has developed an app called Kamioun to help shopkeepers better control their inventory. When it was launched in 2020 during the pandemic, Kamioun was intended to interface between suppliers and grocers. However, the aggressive Tunisian context meant the service had to pivot to an app-driven wholesaler.

“It is an e-commerce app; our platform covers the full supply chain,” Belghith told Al-Monitor. The service now has 2,000 customers in a country where e-commerce is in its infancy and e-payment systems have floundered.

“It is a seller’s market. Brands and wholesalers dictate what they will sell to you and do conditional selling," said Belghith, describing deals in which shopkeepers wanting to buy yogurt would need to buy water and milk as well. He named dairy market leader Delice Danone as one of the worst offenders.

Some suppliers just send shops random selections, wasting their time. The local shopkeeper showed Al-Monitor an inventory, saying, “The supplier sends me stuff I don’t need. I’m going to have to send most of this back.”

Anis Dhaw, another shopkeeper in one of the newer suburbs of Tunis, is the first in his family to own an attar and was an early adopter of the Kamioun app. He told Al-Monitor that he was fed up with suppliers pulling up at his shop and bullying him. “They rush you — that is the policy of a lot of brands. It’s a very aggressive way of selling; it is part of the culture.”

Belghith said, “The problem is people accept this behavior as normal and do not understand that this is why we are failing economically.”

However, technology and access to information could prove the way forward in creating a more equitable buyer-friendly market in Tunisia. Dhaw, who has been using the Kamioun app since 2020, says stock control is much easier with the app. “When I go around the shop I can see what is missing and order as I go and only order what I need." He added, “I have the prices at my fingertips, I don’t focus so much on the cost, but on price rises.” Dhaw explained that since last summer, “There has been a series of very rapid price rises. For example, the last price rise was for bottled water and fizzy drinks because the cost of plastic has gone up.”

Amar Dhaya is president of the Tunisian chapter of the Consumer Defense Organization, which gathers market and government data. He told Al-Monitor that although Tunisia has consumer protection laws, customers are regularly taken advantage of.

The shopkeepers complained to Al-Monitor of prices varying wildly from wholesaler to wholesaler. Dhaya said that shopkeepers need to demand better pricing and service, explaining, "The shop owner has to refuse. It starts there. If everyone refuses they can pressure suppliers to just deliver what they need.”

Dhaya said the organization is developing a platform as well as the app and using local radio to enable price comparison and inform consumers of their rights.

According to the World Bank, the Tunisian population in poverty or vulnerable, defined as living on less than $5.50 per person per day, rose from 16.7% in 2019 to a current 20.1%. The figure is similar to that of 2010, the year the revolution ousted President Zine Abbedine and his kleptocracy from power. Many people are forced to consume less as the cost of living continually rises.

Many customers therefore rely on attars to extend them credit and shopkeepers, who buy on consignment, find themselves squeezed between their creditors and their debtors.

Dhaw offers credit but only buys stock for cash on delivery, saying, “I don’t have credit on both sides.” However, customers don’t always pay their bills at the end of the month. “They tend to push it a little. I have very good customers who I cannot really rush, but I have had some misadventures' when customers racked up bills and disappeared."

Belghith said that the app is being developed to help manage the whole attar business model, including customer credit, and to create more diversity in the product range. “I want to reach the point where we can launch products across our range,” he said, including locally produced and organic specialty products like dried figs or natural cosmetics.

However, Belghith’s vision is for attars to become the vanguard of the fintech revolution, creating a national acceptance network for mobile payment. According to data website Statista, only 40.2% of Tunisia's urban population and 22.4% of the rural population had a bank account in 2020. Belghith said, “Only a proportion have a bank card, and then how many of those feel comfortable paying online? So everybody else is lining up and wasting their time and their nerves for something quite stupid, so maybe they would pay at their neighborhood shop.”

Despite Tunisia’s fragility, Belghith is optimistic, pointing to Egypt MaxApp, a more advanced version of his. "They are a couple of years ahead; they are gigantic now.”