Tunisia’s president says he is waging a war on speculators hoarding food, but his new decree-law also includes an article that forbids the spreading of “false news and information” about food shortages and the supply chain. 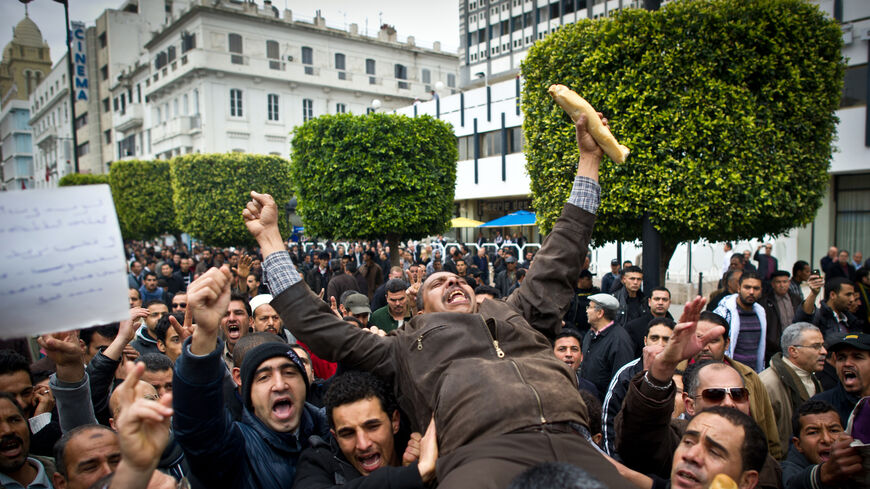 A Tunisian man holding a baguette is carried by fellow protesters during a demonstration in Tunis on Jan. 18, 2011. - MARTIN BUREAU/AFP via Getty Images

Images of Tunisians queuing for bread outside bakeries and empty shop shelves where flour, rice and vegetable oil should be have flooded the press and social mid-February with seemingly no end in sight, which — just ahead of Ramadan — is particularly disheartening for Tunisians worried about political and economic instability.

Kais Saied’s response to the food shortages came on March 9 when he announced that he was waging war on speculation and then later on 20issued Decree-Law 2022-14 creating higher penalties for speculating on goods, with penalties ranging from 10 to 30 years of jail time, effectively a life sentence for cartels hoarding state-subsidized products like flour and planning to sell at a higher price later.

The daily news is rife with scenes of police raiding storehouses full of sacks of flour and semolina and other food and domestic products. The Ministry of Commerce’s Facebook page is a catalog of police raids on wahouses full of sacks of flour, other foodstuffs, and highly perishable foods such as eggs and vegetables, all captioned with admonishing commentaries of how these small-business people are stealing the nation’s food Tunisia's press noted that despite these mass confiscations of so many tons of flour, oil and sugar, shop shelves are not being refilled.

The Syndical Chamber of Wholesalers published a statement complaining about the armed police raids and arrests. Yassine Zine Abbedine Acheh, vice president of the Chamber of Wholesalers, told AlMonitor, “One-hundred of our members have been raided by police. We are working out a solution with the Ministry of Commerce." He sounded nervous and appeared reluctant to go into detailshen asked how he felt about police inspecting warehouses, he said they had accepted this and the new decree-law had “fixed things now”

Amnesty International is concerned that Saied’s decree-law could be a tool to suppress any public debate or news reporting about food shortages that does not agree with the residential line. It said in a press statement March 25 that article 3 of the anti-speculation decree-law “criminalizes the deliberate spread of “false or incorrect news or information” that would cause consumers to refrain from buying, or to disrupt the supply of goods to markets and thereby cause prices to rise.

Deputy regional director for the Middle East and North Africa at Amnesty International Amna Guellali said in that statement that “Tunisia is already suffering a long-standing economic and financial crisis. It is more important than ever that people in the country be free to discuss and debate the issues that affect them, including food security and goods supplies, without fear of prosecutions.”

The global supply chain has been under increased pressure since the coronavirus pandemic beganand has hit Tunisia’s already stagnant economy hard, weakening the dinar and raising inflation and unemployment. After his power grab on July 25 last year, Saied made a great show of demanding that shopkeepers and food retailers lower their prices. However, food and energy prices have continued to rise on a near-weekly basis.

“There is no speculation, just food shortages,” said Houssem Saad of ALERT, an association that campaigns to end Tunisia’s rent economy through research and education. “Tunisia has always been a  that gives privileges to certain minorities.”

that was wielded as a baton of defiance in many a popular protest including the 2011 revolution as people shouted “bread, justice and dignity” is made soft flour and costs only 200 milim (0.06 US cents) due to state subsidies. All of Tunisia’s imported grain is bought through the government Office of Cereals and is distributed unevenly amongst milling companies according to set quotas.

These quotas Saad explained are effectively government-sanctioned millers are companies making pasta and other products like couscous and biscuits.

These companies have influence over how much grain is bought by the Office of Cereals. However, government spending power has been diminishing, which has caused cash flow problems and resulted in ruptures in the supply chain. Food shortages happen regularly in Tunisia but do not usually involve quite so many essential food products, as has been the case since.

Guellali said in the same Decree-Law 2022-14 risks creating a chilling effect that dissuades people from openly discussing food supplies and food security for fear of reprisal."

The new decree-law is the latest in a string of blows to human rights since Saied suspended parliament last July and began concentrating power in the executive branch.” Tunisia has also seen a diminishing public press, arrests of journalists and the closing of TV channels since July 25.

Saad that ALERT is not worried by this law. “I was on the radio talking about the product shortages and the journalist told me to be careful because I could be jailed, and then we just laughed. Kais Saied has solved his problemof the courts; he has proved that he is able to judge anybody.” He added, “When consumers are  they consume more.”

William Lawrence, professor of political science at the American University in Washington, DC, who has worked on North Africa with the Crisis Group, told Al-Monitor, “Kais Saied has clearly taken a page out of the Algerian playbook (referring to the 1988 Algerian economic crisis and food and water shortages)by turning the population against those who produce and distribute their food in order to distract them from the state dysfunctionalities that he has done almost nothing to address.”

Lawrence warns that this tactic is self-defeating. “It will not help him get the IMF loan if he is attacking small businesses and is on anti-business witch hunts, and it will only worsen an increasingly dire economic situation.

Ukraine supplies the bulk of Tunisia’s wheat, and although Tunisia has secured enough grain to limp through the coming few months, it seems likely that another crisis may be on the horizon.