The Turkish leader is pressuring retailers to drop their prices to tame inflation, singling out grocers for high prices on some of the country’s staple foods. 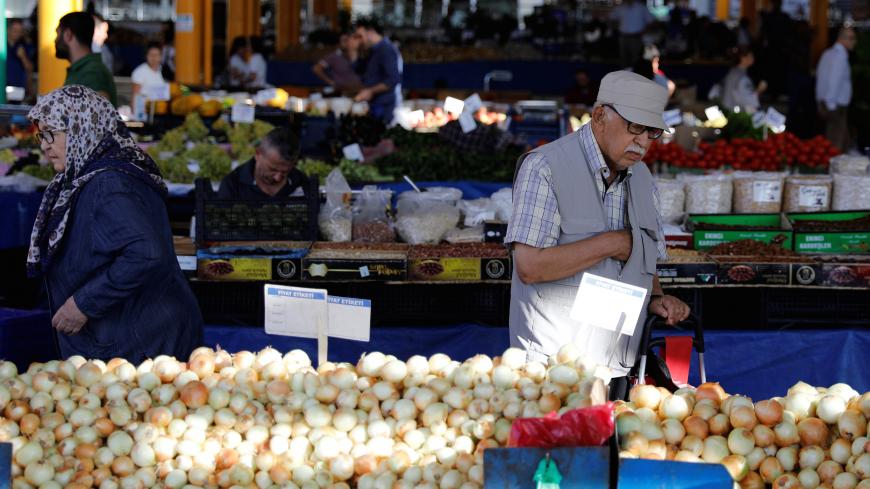 ISTANBUL — Supermarkets have begun pulling vegetables from their shelves rather than risk the wrath of President Recep Tayyip Erdogan, who has accused them of price gouging amid an economic downturn, newspapers reported.

Inflation is stuck above 20% after a currency crisis erupted in August over worries about Turkey’s overheating economy and diplomatic sparring with the United States. Since then, Erdogan has bullied businesses into lowering prices and banks into reducing interest on loans ahead of nationwide municipal elections in March, when the rapidly slowing economy could sap support for his party.

Some economists argue such interventions amount to de facto price controls and fail to address the root causes of Turkey’s economic turmoil, such as staggering corporate debt. Other measures launched by the government to lower prices have included tasking police with scrutinizing prices on market shelves and sending inspectors on surprise visits to warehouses to check for hoarding.

“If these grocery stores continue to exploit my people, it is my duty to hold them to account, and I will,” Erdogan told a meeting of businessmen on Jan. 26. “This isn’t commerce, this isn’t making money. It is opportunism, hypocrisy, usury. It is even treason against the nation,” he said.

In response, supermarket chains have begun to pull seasonal produce like peppers and eggplants from display cabinets and refuse to buy them from wholesalers, who have dramatically hiked prices amid adverse weather conditions and higher input costs, Hurriyet reported this week, citing retail and agricultural industry officials. The vegetables are now only available at outlets in more affluent districts of the country, the daily said.

“Supermarkets don’t want to be pitted against consumers and government ministries. … They don’t want to take the risk at these prices. We expect several other products to also be restricted,” Nevzat Akcan, who heads a producers association, told Hurriyet.

A severe storm last week that set off a rare tornado at the airport in the southern city of Antalya that smashed into planes, cost Turkey 100 million lira ($19 million) in damage, Erdogan said. Damage to Antalya’s greenhouses alone is in the millions of lira, Daily Sabah reported. Turkey is one of the world’s top five greenhouse agricultural producers, and more than a third of its greenhouses are located in Antalya province.

Retail prices on tomatoes, eggplants and peppers have more doubled since last year, Sozcu reported on Thursday, calling tomatoes “as valuable as gold.” Prices on some vegetables are two-thirds higher in Turkey’s biggest city of Istanbul than elsewhere in the country, it said. Vendors at street markets, where prices tend to be lower due to lower overhead costs, now sell some fruit and vegetables by the “bouquet” rather than kilogram since shoppers can only afford a handful, the paper read. Tomatoes, peppers and eggplants are essential ingredients in Turkish cooking, appearing in dozens of specialties. The working-class staple of menemen, an egg dish that includes peppers and tomatoes, now costs more than 22 lira to feed five, compared to nine lira just 10 days ago, before the storm.

A survey of Istanbul’s wholesale market hall shows prices prices more than tripling for some vegetables in the month of January alone, according to Karar newspaper.

“Since there is no easy way of reducing food prices, the quickest way is to browbeat the supermarkets, the producers, the merchants. But it doesn’t work, people simply won’t sell,” Atilla Yesilada, an analyst at GlobalSource Partners, told Al-Monitor.

“It is extremely distortionary. It’s a significant step away from the principles of the free market economy and most importantly, it backfires. The supermarkets refuse to sell eggplants, peppers and zucchinis, and the farmers who are able to bring these goods to the market are being punished. Next year, they simply won’t plant them,” he said.

The economy is the top source of worry for voters ahead of the local elections on March 31, according to two polls released this month that also tracked a decline in support for Erdogan’s Justice and Development Party. A report by Kadir Has University released this week said more than 57% of Turks believe the economy is getting worse.

Annual inflation eased to 20.3% in December, figures released earlier this month showed, down from 25.2% in October, their highest level since 2003, even though food prices rose more than 25% year-on-year, according to official statistics. The fall in overall prices is due in large part to weak consumer demand as a recession bites and unemployment rises.

The slump in demand was exposed in trade data released on Thursday that showed imports fell 28% last month. Exports rose only 0.2%, the state statistics office said.

Ultimately, the economic contraction is what will lower prices in Turkey, said Timothy Ash, strategist at BlueBay Asset Management. “Turkey is in recession, there is an extreme slowdown in domestic demand, and that should be deflationary. If people aren’t buying, it’s a bit hard to increase your prices. The campaign to put pressure on retailers, that’s one thing, but there are good reasons to think that inflation will surprise on the downside anyway,” he said in an interview.

Turkey’s Central Bank offered some hope this week when it cut its year-end inflation forecast to 14.6% from a previous 15.2%, saying lower global oil prices and weak domestic demand would rein in price rises.

But for now, many Turkish shoppers will have to do without. In his 1988 hit “Domates Biber Patlican,” or “Tomato, Pepper, Eggplant,” the late rocker Baris Manco complains that the ubiquitous refrain of a vegetable vendor is interrupting his attempts to declare his love to a sweetheart. “Tomato, pepper, eggplants. Now I know you’re far away. I am praying that one day you will return,“ he croons. These days, the song could just as well be a lament for fresh, affordable veggies.