Turks are lining up in the thousands to buy subsidized vegetables at mobile stalls in Istanbul and Ankara as the ruling party attempts to fight soaring food prices ahead of elections. 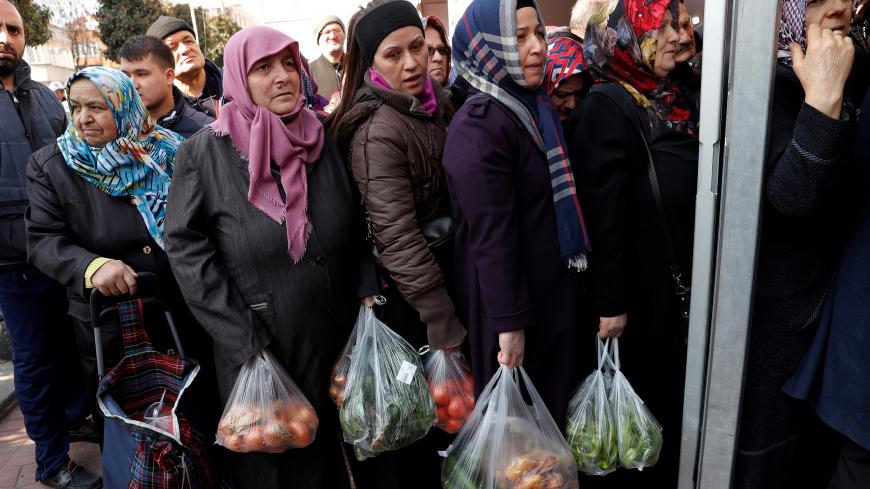 People wait in line to buy vegetables sold in a tent set up by the municipality in the Bayrampasa district of Istanbul, Turkey, Feb. 11, 2019. - REUTERS/Murad Sezer

Thousands of citizens queued to buy cheap vegetables for a second day today at mobile stalls erected by the government, part of a last-ditch bid to combat inflation and curry voters’ favor ahead of municipal elections that are due to be held on March 31. The stalls sell eggplants, tomatoes, onions and peppers at half the market price, in line with President Recep Tayyip Erdogan’s newly declared war against alleged profiteers and speculators.

“Just as the state finished off the terrorists in the caves, we will finish off those who are unleashing terror in the wholesale halls," he roared at a public gathering on Sunday in an apparent reference to the outlawed Kurdistan Workers Party (PKK).

The government’s move has spurred widespread controversy with critics accusing it of spending taxpayers' money to subsidize the ruling party's own election campaign. The accusations grew louder after the president of the state-run agricultural credit fund, Fahrettin Poyraz, let it slip today that the temporary stalls would remain open for only two and a half months.

“The state has become a greengrocer,” wrote Deniz Zeyrek, a prominent columnist for the opposition daily Sozcu. “Setting aside the long lines, where one waits for an hour, the [three-kilogram] limit set for the amount of vegetables that one can purchase, reminds us of ration cards [from the war years],” Zeyrek noted.

But many citizens interviewed on television seemed pleased with the new arrangement, prompting disbelief among some Turkish tweeps. “I hope people in the West realize that there are Turks right now standing in an hours-long queue for state-rationed vegetables who believe with all their hearts that you are jealous of them,” tweeted Can Okar.

The stalls are located only in Istanbul and Ankara and are open for business between 10 a.m. and 10 p.m. Both cities, Turkey’s first and second largest, respectively, as well as the stalls are run by Erdogan’s ruling Justice and Development Party (AKP). The Istanbul municipality reported selling 297 tons worth of produce on the first day. The government has also begun importing onions from neighboring Iran, with the Iranian product selling at four liras ($.76) per kilo compared with five liras ($.95) per kilo for local ones.

A thriving Turkish economy has long been the mainstay of the AKP’s popularity, which has seen the Islamists retain power uninterrupted for the past 16 years. But a slowdown in growth, rising inflation and unemployment and a tumbling lira have taken off the gloss. Food inflation is at an annual 31%, the highest since 2004, with the price of eggplants, a favorite staple, jumping by a whopping 81%, reported Bloomberg quoting official data. Erdogan, who has ruled out any intervention by the International Monetary Fund, has increasingly resorted to his trademark polarizing rhetoric and subsidies to weather the storm.

In a speech last week, Erdogan urged citizens to stop whining about food prices and to concentrate instead on the price of bullets and soldiers’ uniforms in the battle against the PKK.

Should they heed his advice they may well conclude, as a formerly dovish Erdogan once did, that seeking a peaceful solution to the country’s Kurdish problem is probably wiser than spending billions of dollars on the 38-year campaign against the militants.

Nesrin Nas, a secular politician and former leader of the liberal Motherland Party, said the divisive tirades are intended to divert public attention from the deepening economic crisis. But instead, “the long queues forming outside the vegetable stalls have brought growing poverty into sharp relief.”

Nas told Al-Monitor, “They failed to solve the underlying structural problems that have given rise to today’s crisis — just consider the statistics.”

The share of agriculture in Turkey's GDP has shrunk to 3% from 11% in 2000, when her party was in power in a coalition government. The number of registered farmers has dropped to 5.3 million from 7.7 million over the same period. Nas blamed the government’s obsession with construction-driven growth, saying it ought to have been focusing on helping cut production costs and making the sector more lucrative for farmers. “It's clear that their policies are failing, otherwise how could food prices be rising in Turkey when they are at an all-time low in the rest of the world?”

True to form, Erdogan’s son-in-law Berat Albayrak, who is the country’s economy minister, hinted at a conspiracy. “Our latest information suggests that something fishy has been going on” with regard to fresh vegetable and fruit prices, Albayrak said. He failed to elaborate.