The Takeaway: Trump's revenge as Biden deal with Iran stymied by IRGC sanctions 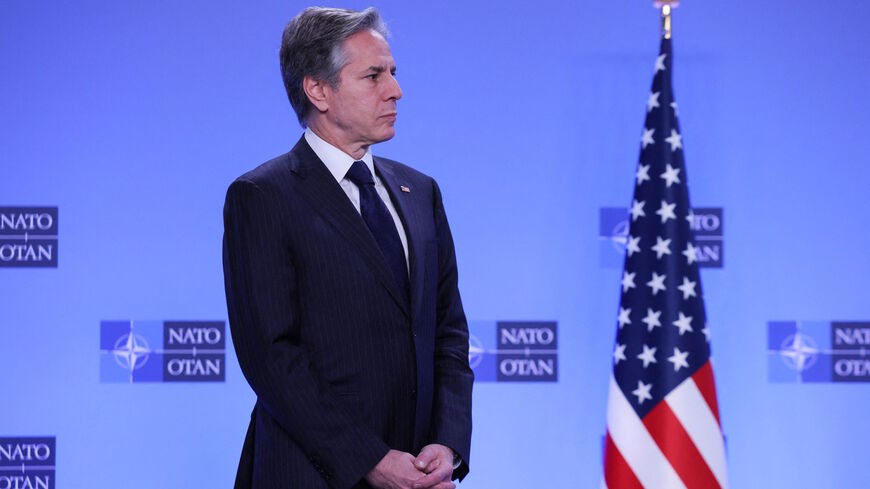 US Secretary of State Antony Blinken looks on as he meets with NATO Secretary-General Jens Stoltenberg at NATO headquarters in Brussels, Belgium on April 6, 2022. - EVELYN HOCKSTEIN/POOL/AFP via Getty Images

Leading the news: Terrorist designation of Revolutionary Guards at issue

The United States and Iran have never been closer to an agreement to revive the Joint Comprehensive Plan of Action (JCPOA), or Iran nuclear deal, even as US Secretary of State Antony Blinken said today that he is “not overly optimistic” it will get done.

But whether the parties to the agreement can reach a signing ceremony in Vienna may hinge on a so-far-elusive solution to a legacy policy of the Trump administration: the designation of the Islamic Revolutionary Guard Corps (IRGC) in Iran as a Foreign Terrorist Organization (FTO).

Iran not giving up on revenge for Soleimani …

Both Washington and Tehran appear ready to sign — except for the IRGC, and the parties seem to be running out of ideas on a workaround.

EU Deputy Secretary-General Enrique Mora has been the man in the middle, shuttling between capitals, and Blinken and Malley are in Brussels today to meet with EU counterparts.

Linkage: A signal from Yemen? In a phone call with UN Secretary-General Antonio Guterres on April 3, Amir-Abdollahian expressed support for the UN-brokered cease-fire in Yemen. Iran likes to claim a healthy distance from the Houthis, but no attacks, or cease-fires, happen without the go-ahead in Tehran. If timing is everything, the Yemen truce might also be a sign, as it comes in what may be the closing days or weeks of the Iran talks, and amidst US, Israeli and other concerns about Iran’s policies in the region.

Fighting between pro-government and opposition forces in Syria’s northwestern province of Idlib has escalated in the shadow of Russia’s invasion of Ukraine. While a local source close to the government said there are so far no indications that a renewed military operation in Idlib is imminent, the region is nonetheless on edge. On Monday, Syrian regime artillery killed four children in the town of Maaret al-Naasan as Russia carried out a series of air raids in Idlib’s southern countryside. Turkish-backed rebel factions and Hayat Tahrir al-Sham (HTS), the powerful militant group that controls Idlib, retaliated by shelling the regime’s local headquarters and gathering points. Khaled al-Khateb reports that Russia may be trying to compensate for its losses in Ukraine with increased attacks in Syria.

Turkey’s annual consumer inflation jumped to a new two-decade high of 61.1% in March, a hike partly fueled by the commodity shock of Russia’s invasion of Ukraine. The war has caused problems in the supply of imported goods such as sunflower oil, which helped drive up food prices in Turkey by 4.7% last month. The price of diesel rose by an unprecedented 32%.

President Recep Tayyip Erdogan, who is seeking re-election in 2023, has refused to raise interest rates to control inflation. “With Erdogan counting on economic growth to boost his electoral fortunes, his government has shown little intention of enacting deflationist measures to cool the economy,” writes Mustafa Sonmez. Keep reading for more on why the soaring inflation is bad news for Erdogan politically.

An angry mob’s recent attack on the Baghdad office of a prominent Kurdish political party has added to the tensions stoked by Iran-linked factions in Iraq. On March 28, the Kurdistan Democratic Party’s office was ransacked and possibly looted by a mob of Iran-linked militias. Shelly Kittleson writes there was “so much damage to both the KDP office in Baghdad and public trust in the ability of the security forces to prevent such violence that the KDP decided simply to demolish the office and suspend its activities in the Iraqi capital.” The attack comes after months of threats and violence targeting the Kurdistan Region of Iraq and specifically the KDP.

A record number of women and young people are running in Lebanon’s May parliamentary elections, in what will mark the first nationwide ballot since the anti-government protests that swept the small Mediterranean country in 2019. Of the 1,043 registered candidates, 155 are women and 88 are between the ages of 25 and 35. The election comes as Lebanon faces its worst economic crisis in its modern history, marked by a plunging currency, rising inflation, and severe fuel and medicine shortages. Hanan Hamdan spoke with young candidates, including a 26-year-old biomedical engineer who said “the current economic crisis has destroyed our future as young people, and we have to do something about it.”

Egypt has intensified climate policy discussions with African countries ahead of the COP27 climate conference in November, writes Ahmed Gomaa. Most recently, President Abdel Fattah al-Sisi hosted Congo’s Environment Minister Eve Masudi for talks on March 29. Last month, Egyptian Petroleum and Mineral Resources Minister Tarek el-Molla announced that the African Union will launch an Egyptian-led renewable energy initiative during the summit. Experts say urgent action is needed to combat climate change in Africa, where a warming of more than 2 degrees Celsius would mean a loss of 5% of gross domestic product each year by 2030.

Watch: Check out the latest episode of "Reading the Middle East with Gilles Kepel," where he interviews renowned French architect Jean Nouvel about his experience designing world-famous buildings throughout the Middle East.