Turkish Foreign Minister Mevlut Cavusoglu has recently admitted that his government held security talks with the Syrian government amid plans for the "safe return" of Syrian refugees to their home country. 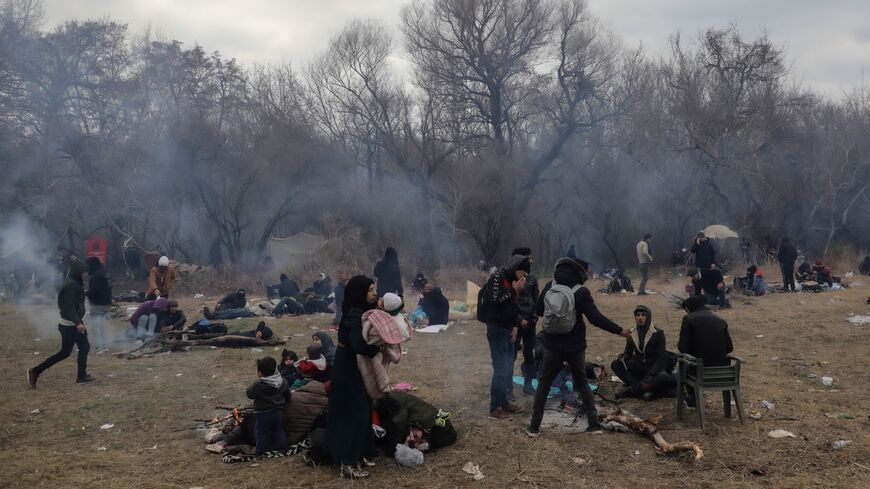 Refugees and migrants rest near Pazarkule border as they attempt to enter Greece from Turkey on Feb. 29, 2020 in Edirne, Turkey. - Osman Orsal/Getty Images

IDLIB, Syria — On April 20, Turkish Foreign Minister Mevlut Cavusoglu announced the start of what he described as a new phase for the “voluntary and safe” return of Syrian refugees to their country, in cooperation with Lebanon, Jordan, and Iraq.

Cavusoglu hinted at the possibility of security talks with the regime of Syrian President Bashar Assad, saying, “Intelligence meetings were held between the two countries [Turkey and Syria] in the past.”

The Turkish government also canceled permits allowing Syrians in Turkey to visit Syria for Eid al-Fitr, which marks the end of the Muslim holy month of Ramadan. This measure is believed to be a response to the demands of the Turkish opposition, which often criticized the government for allowing the Syrians to go to Syria and return to Turkey for Eid.

Turkish opposition party officials have said the past that Syrians who spend Eid in their country can stay there because those areas are safe.

Cavusoglu’s statements come amid growing concerns among the Syrian opposition of a Turkish rapprochement with Assad’s government.

Yaser al-Farhan, a researcher and human rights activist currently based in Turkey, told Al-Monitor, “Turkey does not intend to send back Syrian refugees to the Syrian regime-held areas. Turkey’s position on the regime is still the same; it believes the Assad regime is committing war crimes against the Syrians.”

He added, “When Turkey received Syrians at the beginning of the war, it did so from a humanitarian perspective, and it would not just abandon them.”

Al-Farhan, a former member of the opposition-affiliated Syrian National Coalition, said that any plan to return Syrians would be to "the opposition-controlled areas in northern Syria, not the regime’s areas. This requires a series of economic, development, and security measures, to encourage Syrians to voluntarily return home.”

The root of the problem, he continued, is Assad staying in power. "The disruption of the political solution in Syria is what exacerbates the increase in the flow of refugees to Turkey and Europe. I do not think that Turkey will forcibly return the Syrians.”

Ghazwan Kronfol, a human rights activist and lawyer defending refugees in Turkey, told Al-Monitor, “Syrians who have previously returned to the regime-controlled areas were either killed, arrested, or tortured, and the international community did nothing to protect them.”

The new Turkish engagement with the refugee issue, he said, is part of repositioning Turkish foreign policy to recognize the Assad regime, and "the refugees are the victims of those policies.”

Kronfol noted that the restrictions imposed on refugees in Turkey are pushing them to leave, and he believes that the number of Syrians in Turkey will decrease by around 1.5 million in the next year, "either voluntarily leaving or being deported. Integrated infrastructure and entire towns are being specifically built for those who will return to Syria.”

The Eid question, he said, “is a small detail in the context of major policies that aim to transfer 95% of refugees in Turkey to Syria. Also, these visits … are not a legal right for refugees, and I believe the [Turkish] government was right to cancel them.”

Syrian opposition leader Modar al-Assaad, who resides in Turkey, told Al-Monitor, “As soon as the Syrians find a truly safe environment that is protected economically, socially, and politically, they can return, especially since the revolution's project still stands and the Syrians are still dreaming of a free democratic state. Meanwhile, Turkey cannot violate the laws of asylum, … because that is more dangerous to Turkish society than it is to Syrian refugees.”