Some believe that the Russian escalation in Syria’s Idlib is either a prelude to a major assault or a means of increasing pressure on Turkey. 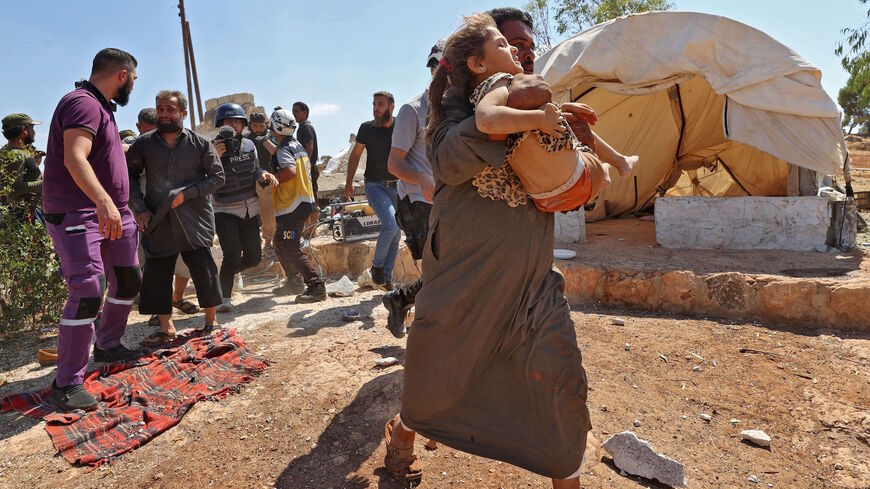 A man carries away a girl who was injured during aerial bombardment at a camp for displaced Syrians near the town of Kafraya in the north of Syria's rebel-held Idlib province on Sept. 7, 2021. - OMAR HAJ KADOUR/AFP via Getty Images

Since early September, Russia has been stepping up its military attacks and airstrikes in Syria’s northwestern province of Idlib and its surroundings.

Russian President Vladimir Putin hosted his Syrian counterpart Bashar al-Assad in Moscow on Sept. 13, at about the same time the hostilities began to intensify.

Some believe the escalation is a prelude to a Syrian government offensive to take Idlib, the country’s last rebel stronghold. Others, meanwhile, believe the activity is merely to gain leverage in the upcoming tripartite summit between Russia, Turkey and Iran.

The summit, slated for the end of September, will bring together Putin, Turkish President Recep Tayyip Erdogan and Iranian President Ebrahim Raisi, as part of the Astana peace process.

In this context, a military official in Hayat Tahrir al-Sham (HTS), which controls Idlib, told Al-Monitor on condition of anonymity, “Part of the heavy weapons of HTS were pulled out from some fronts and distributed on other fronts that recently witnessed infiltrations by the Syrian regime forces. … Our current attacks in response to the regime forces’ infiltration aims to show off the military factions’ strength and readiness to confront and thwart any possible attack.”

The source added, “Turkey has deployed several military convoys to its points on the lines of contact. It will not allow Moscow to advance. The Russian advancement would disrupt Ankara’s national security strategy by causing a catastrophic wave of displacement toward the Turkish territories.”

Hadi al-Bahra, the co-chair of the Syrian Constitutional Committee (which includes representatives from the Syrian government, opposition and civil society to discuss a new Syrian constitution), believes Russia is not interested in direct confrontation with Turkey or in straining its relations.

“The recent military escalation comes within the framework of pressures ahead of the meeting between Erdogan and Putin in Sochi at the end of this month," Al-Bahra, who is also a member of the opposition Syrian High Negotiations Committee, told Al-Monitor. "Russia wants to open the key M4 highway and allow safe commercial traffic on it in order to ease the economic crunch in the regime-controlled area. Russia also wants to boost the movement of aid through the cease-fire lines. This cannot be achieved without Turkey’s consent and the acceptance of the Syrian parties present in those areas.”

Hassan al-Nifi, a political analyst who writes for several local and Arab newspapers, told Al-Monitor, “The regime forces and the Russians’ attacks on Idlib have been ongoing for a long time now, albeit at a varying pace. The attacks are part of Russia’s strategy to empower the regime to recapture as much Syrian land as possible. The recent escalation reflects the regime's endeavor to fully control the M4 highway.”

But, he added, Russia usually escalates its attacks ahead of any political event. so "the current aggression and escalation in Idlib is somewhat expected ahead of the sixth session of the Syrian Constitutional Committee. Truce negotiations between Turkey and the Russians are also expected, amid concerns of a new Russian invasion of the region.”

On Sept. 15, the Turkish newspaper Hurriyet reported that Russia’s increasing airstrikes show that the calm that has prevailed in the region since the March 2020 cease-fire is about to change.

Mohammed Fayez al-Asmar, a defected colonel from the Syrian government now residing in Turkey, told Al-Monitor that Russia is intensifying its airstrikes because of the high cost of any ground action in the mountainous Idlib region and the presence of more than 60 Turkish military posts surrounding opposition-controlled areas. Russia, he said, is also trying to avoid any direct confrontation or military crossfire with Ankara.

The Russian escalation aims to deplete the opposition factions, keep the targeted areas unstable, force the residents of the towns that overlook the M4 highway to leave, and pressure Turkey to open commercial crossings between regime-held and faction-controlled areas, said Asmar, who provides analysis for a number of research centers. "This will bring economic and material benefits to the regime and embarrass Turkey before the international community for being unable to provide protection for that area.”

He added, “Field data show that there is no possibility of any change in the map of control in the near future. But in light of the international community’s silence … the Russian scenario in the opposition-controlled areas will be repeated. It is possible that the Russians would make a new invasion to control new areas, thus endangering the lives of hundreds of thousands of residents.”

“The escalation can be traced back to the recent understandings between Putin and [US President Joe] Biden in mid-June, during which the US hinted that it would not stay in Syria for long," Nasr al-Youssef, a Russian journalist based in Moscow, told Al-Monitor.

Youssef continued, “Russia believes Turkey has not adhered to the cease-fire agreement because it has yet to get rid of HTS. For Russia, this is a valid reason for taking military action in order to control new areas and open the M4 international road that will benefit the Syrian regime.”