Russian jets shelled a camp for the Turkish-backed Syrian National Army in Afrin, north of Aleppo, and intensified its airstrikes against the areas controlled by Hayat Tahrir al-Sham in Idlib ahead of the meeting between the Turkish and Russian presidents on Sept. 29. 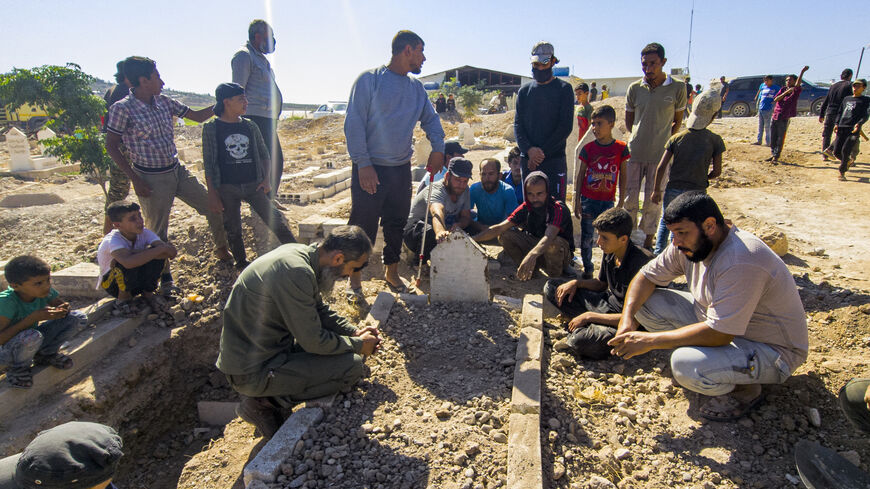 Mourners gather by the grave of one of fighters from the pro-Turkish "Hamza Division" Syrian rebel group killed in Russian air raids, at the Muhamadiya camp near Jindayris in the countryside of Aleppo in the Afrin region of northwestern Syria, on Sept. 26, 2021. - RAMI AL SAYED/AFP via Getty Images

Six members of the National Army were killed and 11 others were wounded. Most of those who were killed hail from the eastern Ghouta area on the outskirts of Damascus.

The sources confirmed that Russian reconnaissance planes had intensified their sorties before the bombing. Also, a day before the bombing, Russian warplanes carried out several raids on different areas of Afrin. They shelled the area surrounding Balshaya and the area between it and Jalbal in the Afrin countryside. This is in addition to an air raid targeting the neighboring town of Basoufan. All of these areas are under the control of the Turkish-allied National Army factions.

The Russian raids were not limited to the National Army areas in the countryside of Afrin but extended to hit large areas of Idlib controlled by HTS. It is noted that Russian warplanes launch on a daily basis dozens of raids on large areas of Idlib.

This escalation comes ahead of an upcoming meeting on Sept. 29 in the Russian city of Sochi between Russian President Vladimir Putin and Turkish President Recep Tayyip Erdogan to discuss the Syrian issue, especially the situation in Idlib.

In a related context, the Syrian Liberation Front claimed an attack on a joint headquarters of the Syrian Democratic Forces [SDF] and the Bashar al-Assad regime in Afrin in retaliation for its members killed in a Russian raid in the area.

A military source from the Syrian Liberation Front who spoke to Al-Monitor on condition of anonymity confirmed that the SDF and the Assad regime’s positions were targeted with a barrage of Grad missiles.

On its social media accounts, the Syrian Liberation Front posted a video titled “Blood for Blood” showing what it said was “the attack of the joint headquarters of Assad's forces and the PKK with an anti-armor missile on the Barad front.”

On this subject, Al-Monitor met with Malik Abu Siraj, a leader in the Syrian Liberation Front. “The Russians are expected to target any area in the liberated areas. They have been showing a lack of commitment to the concluded international treaties and endless and open support for the Assad regime. The artillery and missile units of the Syrian Liberation Front targeted several enemy military sites, causing direct hits.”

He added, “We trust the Turkish guarantor and the Turkish policy that support the peoples' right to freedom and dignity and advocate legitimate causes. Meanwhile, Russia has always supported Assad. The National Army will remain steadfast and will not renounce its objective to bring down the Assad regime and its terrorist offsprings such as the Islamic State (IS), and the PKK and PYD.”

National Army commander Abdul Salam Abdul Razzaq, who resides in Idlib, told Al-Monitor that “the recent Russian military campaign in northern Syria is linked to the issue of east of the Euphrates in light of talks about the US troops’ pull-out and Russia and Turkey’s failure to agree on the fate of this region should this pull-out occur. Russia wants to control the M4-Aleppo-Latakia road and then all other areas if it can. By bombing the Olive Branch areas, Russia is asserting that all areas are Syrian territories and that it has the right to bomb them whenever it wants. Russia believes all factions that are not loyal to Assad are terrorists.”

He continued, “Russia's bombing of the factions' areas reflects the depth of the Russian-Turkish dispute over Syria. I do not expect, however, a battle in Idlib at the time being. The Turkish-Russian summit could defer this battle if some sort of understanding is reached on most of the outstanding issues between the two sides.”

In turn, Majd Kilany, an Idlib-based researcher at the Jusoor Center for Studies, told Al-Monitor that the continued bombing of Idlib aims to put pressure on Turkey. “Moreover, Russia’s main goal is to destabilize the opposition's areas in conjunction with the suffering in the regime-controlled areas,” he explained. “But the intensification of Russian air raids and the fact that these raids also targeted the Afrin region and the areas under the control of the National Army north of Aleppo is a clear message that Turkish-Russian relations are not strained only by field pressures. There are other points of disagreement between the two sides. Russia is inclined to re-discuss all issues and raise the ceiling of its demands based on new data or new concerns.”

He added, “Russian officials are talking again about terrorism. This means they are warning of the return of ground battles and of the collapse of the cease-fire understandings. Perhaps Russia does not want this, but it is using this threat as an alternative option if it is not satisfied with the outcome of the new negotiations. According to political and field indicators, it is too early to talk about the return of battles to Idlib. The intensification of the Russian bombing aims to bring back the involved parties to the negotiating table. In the meantime, Russia is busy confronting IS cells in the Syrian Badia, but this does not mean that it is discarding the military scenario, especially since the Iranian forces are eagerly anticipating this scenario.”

Mohammad al-Sukkeri, a researcher at the Jusoor Center for Studies who lives in Turkey, told Al-Monitor, “Russia's attacks on areas excluded from the Idlib understandings came as a direct message to Ankara that the bilateral understandings could be jeopardized if Turkey insists on rapprochement with Washington. The issue of international roads and the suspension of joint Russian-Turkish military patrols must not be neglected. This heralds a crisis of confidence and a remarkable deterioration of bilateral relations. The upcoming presidential summit is likely to result in new understandings regarding the Syrian issue.”

Sukkeri continued, “Russia has several demands, most notably [controlling] the international road south of the M4 and ridding it of the armed opposition. It also wants to shape the understandings about the Kurdish Autonomous Administration areas. Russia wants direct coordination with it and wants to participate in combating terrorism in the opposition areas by separating the moderate opposition from HTS that Moscow sees as radical.”

He concluded that in the event a satisfactory agreement is not reached, a military operation by Russia and the Syrian military is considered a possible option.