Dozens of nonproliferation experts and former officials have warned that failure to bring Iran back into compliance with the landmark accord would be "misguided, irresponsible, and dangerous." 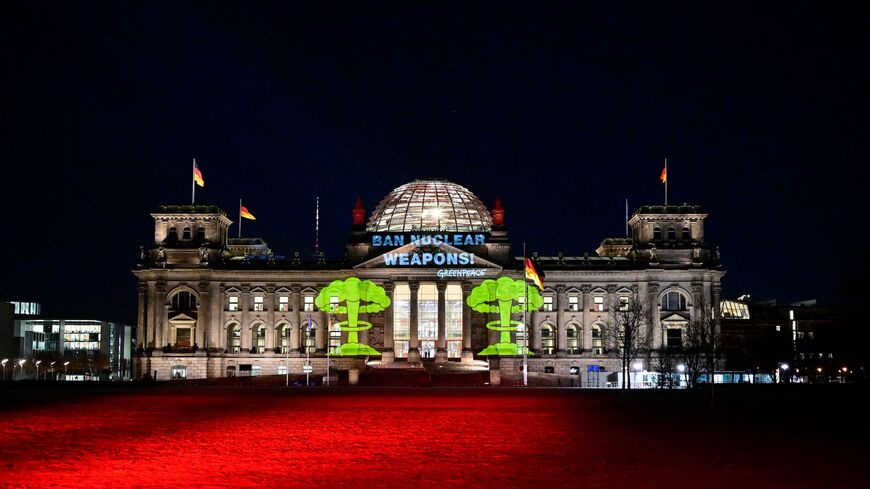 The Reichstag building housing the lower house of the German Parliament is illuminated and an inscription reading "ban nuclear weapons" has been projected on its facade by Greenpeace activists on early Jan. 21, 2022, in Berlin. - TOBIAS SCHWARZ/AFP via Getty Images

With talks over the Iran nuclear agreement at an impasse, a group of nuclear nonproliferation experts and former government officials warned Thursday that failure to revive the deal would raise the likelihood of Iran becoming a threshold nuclear-weapon state.

The original accord, the Joint Comprehensive Plan of Action (JCPOA), “dramatically reduces the risk posed by Iran’s nuclear program,” read the statement signed by more than 40 experts from organizations including the Bulletin of the Atomic Scientists, the Union of Concerned Scientists, the Arms Control Association and the Ploughshares Fund.

The JCPOA set curbs on the purity and amount of Iran’s enriched uranium stockpile in exchange for sanctions relief. Since former President Donald Trump walked away from the deal in 2018 and reimposed crippling sanctions, Iran has made steady advances in its nuclear program.

The signatories write that the time it would take Iran to produce enough bomb-grade uranium to build a bomb is roughly one to two weeks, down from more than a year under the JCPOA.

"Repeating the failed strategy pursued by the Trump administration is misguided, irresponsible, and dangerous as it would increase the danger that Iran would become a threshold nuclear-weapon state," the statement reads.

Why it matters:  Their call for the United States and Iran to return to mutual compliance with the JCPOA comes amid a rising tide of criticism from Republicans and some Democrats who are concerned that the Biden administration could remove the Islamic Revolutionary Guard Corps (IRGC) from the United States' formal list of foreign terrorist organizations. Negotiations have stalled over Tehran’s demand that Washington remove the FTO label, which the Trump administration imposed after exiting the JCPOA.

What’s next:  The Biden administration says the onus is on Iran to resolve the standoff.

"The Iranians know that there is an opportunity to reach a mutual return to compliance with the JCPOA in a quick manner if they are willing to do so," State Department spokesperson Ned Price told reporters on Thursday.

Iran reportedly rejected a US proposal to drop the IRGC from the terror list in return for assurances that Tehran would not target US officials over the January 2020 killing of Quds Force commander Qasem Soleimani. On Thursday, IRGC naval commander Alireza Tangsiri said Iran would never stop seeking revenge even with concessions or sanctions relief from “the enemy.”

Know more:  If the United States revokes the IRGC’s terror designation, the organization would remain subject to a broad range of sanctions that would continue to deter foreign investment. But critics of the nuclear agreement, including Israeli Ambassador to the United States Michael Herzog, say taking the IRGC off the terror blacklist would send the "wrong message.”