Defense Minister Benny Gantz spoke yesterday on the phone with Palestinian President Mahmoud Abbas, and described the easing of restrictions that Israel has decided on for the Ramadan holiday. 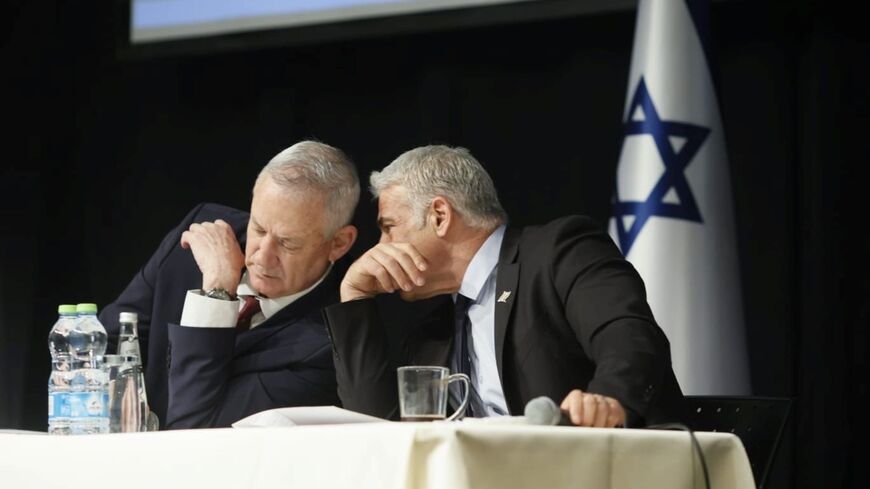 Defense Minister Benny Gantz described today how Palestinians will be able to travel for Ramadan, despite recent terror attacks.

At a joint diplomatic and security briefing with Foreign Minister Yair Lapid for some 80 ambassadors, Gantz presented the confidence-building measures taken jointly with the Palestinian Authority in the past year, and called on the international community to step up and invest in the Palestinian economy.

Israel had decided last week, before the terror attacks, to increase the number of work permits for Gaza Palestinian laborers, from 12,000 to 20,000. It also extended the enclave's permitted fishing zone.

On March 31, two days after the Bnei Brak attack, the security cabinet decided not to place the West Bank under lockdown and not to further restrict Palestinians’ access to Jerusalem’s Old City. Rather, they decided to go ahead with plans championed by Gantz to ease restrictions for Palestinians during Ramadan.

In a video message posted on Facebook April 2, Gantz greeted the Palestinians on the month of Ramadan. At the same time, he said any easing of restrictions during the Muslim holy month would depend on the security situation. “Unfortunately, we are in a difficult period of terror attacks on the citizens of Israel, a reality we cannot accept, and we are working against it with force and determination. We are currently examining what steps we can take towards Ramadan, to allow you to celebrate the holiday in the best possible way, while first and foremost maintaining security,” he added.

At today's security briefing, Gantz noted, "We are operating with accurate intelligence, defensively and also in offensive prevention." He revealed some details on two terrorist attacks thwarted by Israeli security agencies in recent days, and said, "Israel will continue to act vigorously against terrorism, and will make an effort to separate the terrorists from the civilians."

Yesterday, Gantz gave Ramadan greetings to Palestinian President Mahmoud Abbas during a phone conversation. Tweeting afterward, the defense minister expressed his desire for Muslim Ramadan and Jewish Passover to be a time of peace and tranquility. ‘’Israel takes very seriously the terrorist attacks that claimed the lives of 11 people and will continue to act vigorously to prevent harm to civilians and security forces,’’ added Gantz.

Gantz thanked Abbas for condemning the March 29 attack in Bnei Brak, and emphasized to him that Israel is ready to ease restrictions during and after Ramadan, as much as the security situation will allow.

Abbas' condemnation of the Beni Bark attack was a rare such move on his part in recent years. His office stated, “The killing of Palestinian and Israeli civilians only leads the situation to deteriorate.”

Israel’s Coordinator for Government Activities in the Territories (COGAT) Major General Rassan Alian said April 5 that West Bank Palestinians would be allowed to visit first-degree relatives in Israel during the Ramadan. Palestinian women at all ages, men over 50 and children under 12 will be allowed to enter Israel and the Temple Mount/Haram al-Sharif compound for Ramadan’s Friday prayers without special permits. Men younger than 50 would be allowed to enter via permits. Operation hours of the crossing points into Israel will be extended.

Reports in the media end of March claimed Gantz was interested in joining the March 28 meeting in Ramallah between Abbas and Jordanian King Abdullah II, in order to discuss with both of them efforts to prevent violence during Ramadan. The reports said Bennett did not authorize Gantz to participate in the meeting, so as not to overshadow the Negev Summit organized by Lapid with counterparts from the US, Egypt, Morocco, the Emirates and Bahrain.