Defense Minister Benny Gantz has made it clear that alongside raids to apprehend terrorists, Israel must work harder to better the lives of Palestinians. 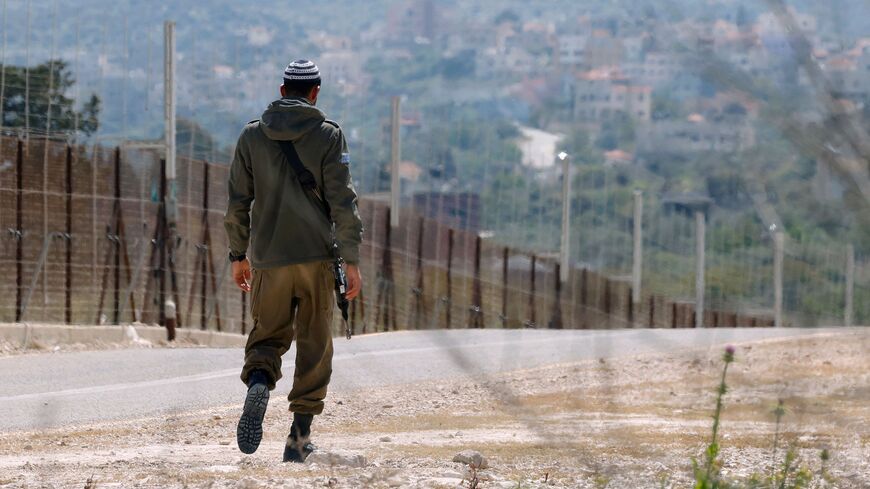 An Israeli soldier patrols the road along the security fence near Ibthan in central Israel separating it from the occupied West Bank on April 13, 2022. - JACK GUEZ/AFP via Getty Images

After four major terror attacks in Israel at the end of March and beginning of April, tensions continue to increase in the West Bank. With Muslims celebrating Ramadan, and the Jewish Passover and Christian Easter coming, Israel is preparing for more trouble.

Israeli troops have been in the region for the past two weeks to apprehend those planning more assaults in an operation dubbed by the Israel Defense Forces as "Operation Break the Wave." They are focusing on the Jenin area because the perpetrators of the two most recent attacks are from the city, but are also raiding other West Bank locations.

Two Palestinians were killed today and at least four more injured in clashes with Israeli soldiers. The Palestinian press named those killed as Shas Kammaji and Mustafa Abu Al-Rub. The first was the brother of Ayham Kamamji, one of the six Palestinian security prisoners who escaped from the Israeli Gilboa jail a few months ago. Israeli troops also conducted overnight raids of the Nur Shams refugee camp on the outskirts of Tulkarm, Kafr Dan northwest of Jenin and in the town Khirbat Sir, arresting several individuals suspected of affiliation with terror cells or intentions to perpetrate attacks. Three Palestinians were killed yesterday in clashes between Palestinians and Israeli troops in the village of Silwad near Ramallah and outside Bethlehem. People detained in Silwad are suspected of planning a terror attack against Israelis during the upcoming Passover holiday.

This afternoon, Israeli troops arrested Wasim a-Sayed, who is accused of killing Tamar and Yehuda Kaduri in 2019 and Moldovan national Ivan Tirnovski last month. Sayed, who was detained for two years over his affiliation with the Islamic State, was released just four days before stabbing Tironski to death.

Yesterday, Hamas threatened Israel over plans by Jewish activists to conduct ritual sacrifices on Jerusalem’s flashpoint Temple Mount. The group said it would not allow them to do so “at any cost.” Israeli authorities have made it clear they will stop any attempts to bring sacrificial animals to the complex. Later yesterday, Palestinian militant factions in Gaza met before announcing they were instructing their members to be prepared to defend Al-Aqsa Mosque if Israel or Israelis takes any actions there. Still, according to Israeli assessments, Hamas does not intend to launch rockets toward Israel or order any other military action. Egypt has reportedly been involved in recent contacts between Hamas and with Israel in efforts to reduce tensions and avoid an outburst of violence.

While Israeli security agencies continue to search for people affiliated with terror groups and sympathizers of the Islamic State and the Defense Ministry is busy sealing gaps in the security fence, Defense Minister Benny Gantz continues to emphasize that Israel has not adopted a policy of collective punishment.

Inspecting work on the security fence, Gantz said April 12 his office was working on plans to allow tens of thousands more Palestinian workers into Israel. “Alongside intelligence, offensive and defensive operations, we are advancing solutions that will enable tens of thousands of additional workers to enter Israel in an orderly manner.”

The minister said he had instructed the relevant bodies to also prepare plans for upgrading the border crossing points, stating that the move “will improve security and improve both the Israeli economy and the Palestinian economy. We will continue to fight terrorism and take care of the economy.” There are currently some 130,000 West Bank Palestinians with permits to work in Israel and Israeli settlements in the West Bank. Tens of thousands of Palestinians enter illegally Israel every day to work in construction or agriculture.

Under a policy he has followed ever since entering the current government, Gantz continues to work to ease the lives of Palestinians. In an April 6 press conference with Foreign Minister Yair Lapid, Gantz described Israel's most recent moves, such as enabling Palestinians to travel into Israel and Jerusalem for Ramadan despite the security issues and increasing the number of work permits for Gazan laborers from 12,000 to 20,000. He also called on the international community to step up and invest in the Palestinian economy.