Iran and the United States seemingly do not want to budge over the designation of the IRGC in reviving the nuclear deal. 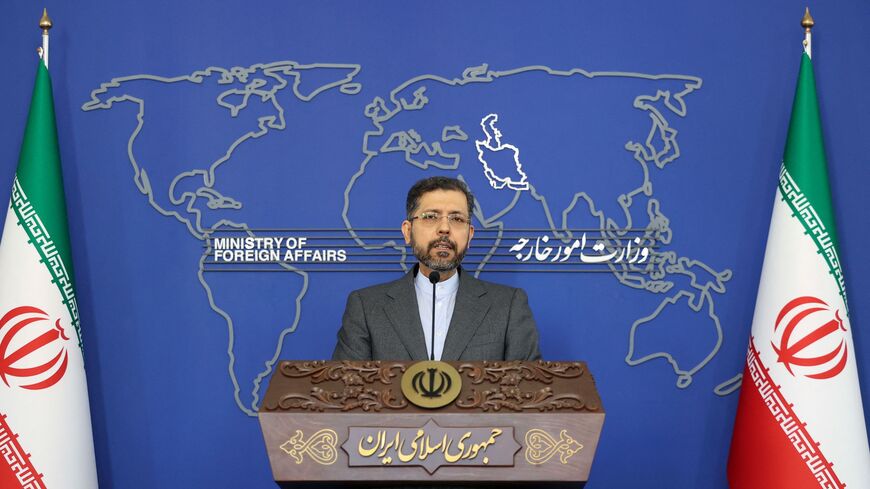 Iran's Foreign Ministry spokesman Saeed Khatibzadeh speaks to the media during a press conference in Tehran, on April 11, 2022. Tehran expressed doubt about reaching an agreement in Vienna talks to restore the 2015 nuclear agreement between Iran and world powers. - ATTA KENARE/AFP via Getty Images

The talks in Vienna to revive the Iran nuclear deal have reached a stalemate, with neither side appearing to want to budge from the final sticking point regarding the designation of the Islamic Revolutionary Guard Corps (IRGC) as a Foreign Terrorist Organization (FTO) by the United States.

In his latest comments Monday on the state of the negotiations, Iran’s Foreign Ministry spokesperson Saeed Khatibzadeh said, “Until all issues are agreed upon, nothing is agreed upon.” He said that “the remaining issues in Vienna are clear to everyone.” Meanwhile, US State Department spokesperson Ned Price, responding to a reporter’s question, said, “If Iran wants sanctions lifting that goes beyond the JCPOA, they’ll need to address concerns of ours that go beyond the JCPOA," using the acronym for the deal's official name, the Joint Comprehensive Plan of Action.

Price’s comments about addressing other concerns were not welcomed by Iranian media. Javan, a newspaper linked to the IRGC, headlined their article on Price’s comments “Washington’s request again to negotiate beyond the JCPOA.” The story read, “Once again another recommendation to negotiate beyond the JCPOA was put on the table.” The article added that these negotiations would include not just the nuclear program but also Iran’s missile capabilities and regional role. Iran’s Supreme Leader Ayatollah Ali Khamenei, who has the final say on all state matters, has repeatedly said that Iran would not negotiate on other issues within the context of the nuclear deal. Previously, long before the US exit of the 2015 deal, Khamenei had once said that if the JCPOA deal comes to fruition and all sides meet their obligations, then Iran would be open to discussing other matters — though the time for that has passed now apparently.

The Trump administration’s poison pill of designating the IRGC as an FTO has brought the talks to a standstill. Iran wants all Trump-era sanctions removed before it returns its nuclear program to levels written out in the JCPOA, especially concerning the level of enrichment and advanced centrifuges in use. The United States is insisting that the designation of the IRGC is not nuclear-related. Since the US exit in 2018 under former President Donald Trump, Iran and the United States have not negotiated face to face and instead communicate via European intermediaries.

The tone in Iranian media has shifted significantly in recent days. Quoting foreign media, Tehran’s Hamshahri daily headlined an article “An agreement in Vienna is very unlikely.” Meanwhile, an article in Tasnim News highlighted the growth in transit of goods in Iran “under the peak of sanctions,” according to a headline. The article claimed that in recent years Iran’s transit of goods has increased 60-100%. The article stated that, under the administration of President Ebrahim Raisi, Iran no longer tied its economy to the nuclear talks unlike the previous administration of Hassan Rouhani, and its economy has been able to “neutralize” the sanctions.

With US midterm elections this year and a presidential election in 2024, the Biden administration may be wary of the political costs associated with delisting the IRGC. Iran, having gone this far in insisting that the IRGC must be delisted, cannot go back and pretend it never made the request. The best both sides can hope for now is at least an interim agreement of some sort.