The Turkish president is expected to travel to the kingdom during Ramadan following the end of the Khashoggi case in Turkey. 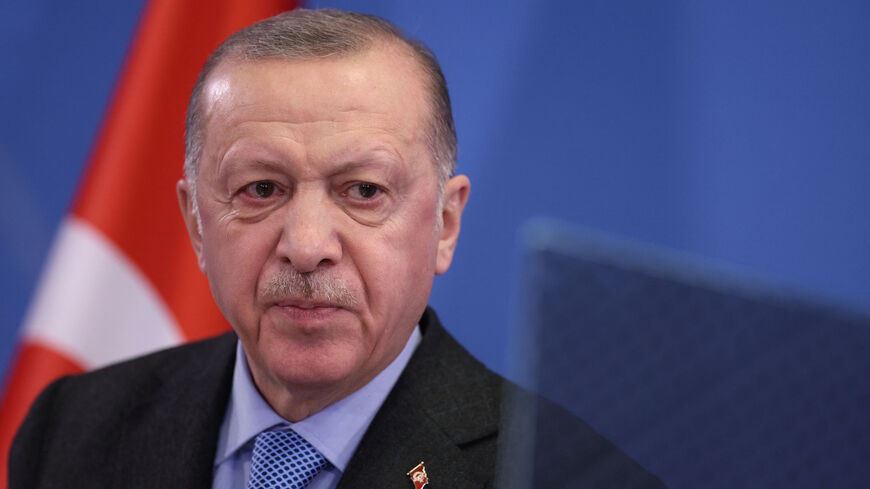 Turkey's President Recep Tayyip Erdogan addresses media representatives during a press conference at an European Union summit at the EU headquarters in Brussels on March 24, 2022. - KENZO TRIBOUILLARD/AFP via Getty Images

Turkey has been on a diplomacy drive over the past year to reset relations with countries it fell out with in the aftermath of the Arab Spring, when its support for groups linked to the Muslim Brotherhood was perceived as a threat by Egypt, the United Arab Emirates and Saudi Arabia.

The split was furthered by later developments such as the blockade of Turkey’s ally Qatar by its Gulf neighbors. That obstacle to reconciliation was removed early last year with the lifting of the embargo on Doha by its GCC neighbors.

However, rapprochement efforts with Riyadh were dampened by the trial of 26 suspects linked to the murder of Saudi journalist Jamal Khashoggi at the kingdom’s Istanbul consulate in October 2018.

A US intelligence report released a year ago assessed that de facto Saudi ruler Crown Prince Mohammed bin Salman approved the operation to kill or capture Khashoggi. The Saudi government has always denied any involvement by the prince.

Without naming bin Salman, Erdogan said the order to carry out the assassination came from the “highest levels” of the Saudi government.

Last week the Turkish trial was halted and handed over to Saudi Arabia, removing the main hurdle to rapprochement.

“Turkey’s milking of the murder of Jamal Khashoggi cost the Saudi government a lot of money and a lot of international goodwill,” said Monica Marks, assistant professor of Middle East politics at New York University Abu Dhabi. “Also, Erdogan invested a lot of domestic political capital in taking a very firm stand on this issue. So on both sides, but especially on the Saudi side, there were special obstacles when it came to forging a rapprochement here.”

She went on, “Conditions are have ripened for it now and that has everything to do with the Khashoggi case.”

Erdogan’s potential visit, which has yet to be officially announced, will follow a visit to the UAE in February that saw the country’s iconic Burj Khalifa, the world’s tallest building, lit up with the Turkish flag and Turkey’s national anthem blasted across Dubai.

Although the president had said he would also travel to Saudi Arabia that month, that trip never materialized. The Turkish press, however, has recently reported he will make the trip during Ramadan.

“Many media outlets express that a high-level visit between Turkey and Saudi Arabia is imminent,” said Ismail Numan Telci, deputy director of the Center for Middle Eastern Studies in Ankara. “It can be stated that the formula in the normalization process developed with the UAE can also be applied in relations with Saudi Arabia. … Trade, economy and mutual investments could be discussed in a high-level visit that may take place after tense political relations between the two countries.”

There have been other signs of warming ties. Turkish Foreign Minister Mevlut Cavusoglu has met his Saudi counterpart and said last month that  “concrete steps” on improving relations would be taken “in the coming period.”

Turkey’s diplomatic campaign has coincided with its worst economic crisis in two decades, compounded by the COVID-19 pandemic and war in Ukraine. Inflation officially stands at 61% while the lira has plummeted, losing 44% of its value against the dollar last year.

Improved ties with Riyadh have already seen the end of an unofficial Saudi boycott of Turkish goods that cut Ankara’s exports by 90%. Last month exports to the kingdom reached $58 million, triple the total of the previous year but a fraction of the $298 million total in March 2020.

Erdogan will likely seek to replicate the agreements reached with the UAE at the end of last year, including a $4.9 billion currency swap and a $10 billion investment fund.

Saudi economic support could prove essential for Turkey and Erdogan, who faces elections scheduled for June next year, according to Eyup Ersoy, an international relations faculty member at Turkey's Ahi Evran University. He said, “Saudi capital, for example, could be instrumental in subsidizing certain staple goods in the period leading up to the elections.”

Access to the Saudi market for Turkish firms would be lucrative while tourism and investment would also boost the flagging economy.

“Unlike the UAE, Saudi Arabia is a massive market,” said Marks. “There are all sorts of Turkish goods that the country could be exporting more of to Saudi Arabia if that relationship strengthens. So they’re looking not only for a UAE-style injection of investment to help buoy their drowning economy but also a revivification of an important export market.”

One remaining question is what Erdogan’s personal relationship with bin Salman will look like.

“I don’t anticipate a closer personal relationship between President Erdogan and Crown Prince Salman,” said Ersoy. “The deep-seated mistrust between the two leaders will not dissipate for the foreseeable future.”

Marks added, “There’s a level of bad blood there that goes well beyond policy disagreements and opposite positionings in the MENA region after the Arab Spring revolution.

“It’s personal vitriol and even though the Turkish courts sent the case back to Saudi Arabia, those wounds will still be raw for some time.”