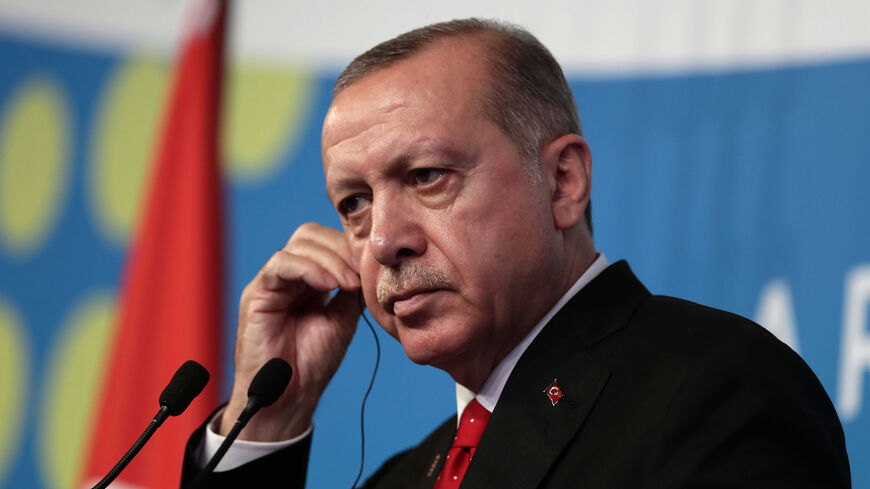 Turkey's President Recep Tayyip Erdogan adjusts his earphone during his final press conference on the second day of the G20 Leaders Summit in Buenos Aires on Dec. 1, 2018. - ALEJANDRO PAGNI/AFP via Getty Images

Turkish President Recep Tayyip Erdogan said Monday that he plans to visit Saudi Arabia in February as Ankara seeks to rebuild relations with Riyadh and several other Gulf countries.

Erdogan’s planned visit to Saudi Arabia comes amid a deepening currency crisis in Turkey. Asked about Saudi exports during a trade event on Monday, Erdogan responded by saying he planned to visit the Arab Gulf country next month.

"He is expecting me in February. He made a promise and I will make my visit to Saudi Arabia in February," Erdogan said in a video shared on social media.

Turkey’s already strained ties with Saudi Arabia hit a new low after the murder of journalist Jamal Khashoggi, who was killed by a group of Saudi agents at the kingdom’s consulate in Istanbul in October 2018. A US intelligence report concluded that Crown Prince Mohammad bin Salman ordered the operation.

Erdogan declined to name the crown prince directly, but said the order to kill Khashoggi came from the “highest levels” in the Saudi government. As Ankara investigated and prosecuted Saudi officials in absentia, Riyadh launched an unofficial boycott of Turkish goods.

Erdogan’s announcement follows phone calls with Saudi King Salman in April and May, during which the two leaders discussed bilateral ties and agreed to maintain a dialogue. In the first high-level Turkish visit since Khashoggi’s killing, Foreign Minister Mevlut Cavusoglu traveled to Riyadh in May to meet with his Saudi counterpart, Prince Faisal bin Farhan.

Erdogan has also sought to mend ties with other Gulf countries after years of tension over issues including the civil war in Libya, the Saudi-led boycott of Qatar, Arab countries’ normalization with Israel and Turkey’s support for the Muslim Brotherhood and other Islamist movements.

In November, Crown Prince of Abu Dhabi Sheikh Mohammed bin Zayed Al Nahyan traveled to Turkey in the highest-level Emirati visit to the country in nearly a decade. Ankara and Abu Dhabi inked a series of investment accords under which the UAE agreed to invest up to $10 billion in Turkey’s economy.

Erdogan has also hinted that Turkey could eventually reinstate its ambassadors to Egypt and Israel, where relations with Ankara have soured over the toppling of Egypt’s first democratically elected president and Israel’s treatment of the Palestinians.