After Egypt’s currency devaluation in March, the Egyptian government hopes to ease the strain on its banking system by mandating that international shipping agencies accept Egyptian pounds instead of US dollars as payment. 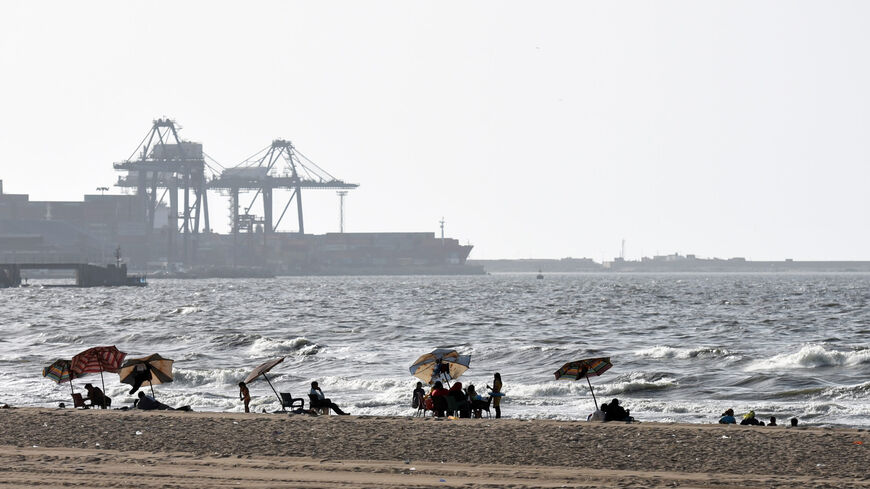 Egyptians sit under umbrellas on the beach in the port city of Alexandria, Egypt, Sept. 12, 2015. - Mohamed el-Shahed/AFP via Getty Images

CAIRO — As a way to relieve the strain on Egypt’s banking system, following the devaluation of the currency in March, the Egyptian government plans to mandate shipping agencies operating in the country’s ports to accept Egyptian pounds instead of US dollars as payment.

The Federation of Egyptian Chambers of Commerce (FEDCOC) in Egypt has urged Finance Minister Mohamed Maait to compel shipping companies to accept terminal handling fees in Egyptian pounds rather than US dollars, for all containers entering Egyptian ports.

In an urgent request sent to the ministry April 10, the authority indicated that this move is meant to reduce the burden and demand for foreign currencies since companies resort to banks for funds to pay for these agencies.

The minister, in turn, assigned the General Authority for Investment and Free Zones (GAFI) to study the request, telling Al-Masry Al-Youm that requiring importers to pay terminal handling fees in US dollars is “unacceptable, as long as shipping agencies provide services on Egyptian soil.”

“I believe the [FEDCOC’s] request will be approved and I am confident there will be no obstacles to its implementation,” Ashraf Shahaat, deputy head of FEDCOC's International Transport and Logistics Department, told Al-Monitor.

He said that Egyptian ports used to receive payments from importers and exporters for terminal handling charges in Egyptian pounds nearly 15 years ago; however, since overseas shipping agencies began operating in Egypt, they have been getting paid in US dollars instead.

“When shipping agencies started working in Egypt, they charged in US dollars. At the time, the dollar wasn't very powerful; Egypt was a stable country, so no one complained. Since we're experiencing a crisis, we're evaluating where foreign currencies are spent because the whole operation is held on Egyptian territory. There is no need to receive payments in dollars,” Shahaat explained.

The charges for terminal handling include container discharge, container loading onto customers’ vehicles, container repair and storage of containers for days at ports in Egypt, among other services. The shipping companies charge between $220 and $480 per container ship, depending on its size. They pay the port authorities $40 to $60 and keep the rest, according to Shahaat.

Currently, there are three ports operated by international shipping companies in Egypt: the Danish Maersk operates in the Port Said Port, the Emirati DP World runs al-Sokhna port and the Chinese Hutchison Ports works in Alexandria and El Dekheila, both of which are located on the Mediterranean coast. As per FEDCOC, most of the foreign currencies collected by these firms are sent overseas into their bank accounts.

On March 21, Egypt devalued its currency by almost 17% after foreign investors pulled billions out following Russia's invasion of Ukraine. In Egyptian banks, the dollar now costs 18.51 pounds for buying and 18.59 pounds for selling, according to the Central Bank of Egypt.

The FEDCOC official said that the involvement of the minister of finance regarding dollar-related business in Egyptian ports would assist in reaching a “collective decision” with the relevant authorities.

“The minister’s intervention is a serious move. This will save us a lot of money — say about $400 to $500 that agencies get for every container in Egypt’s ports. That's a lot of money; it's definitely a serious issue,” Shahaat added.

According to the most recent annual report released by Alexandria's Port Authority, about 3,861 ships accessed the ports of Alexandria and El Dekheila in 2020, carrying 59 million tons of different products between exports and imports, compared to 4,194 vessels loaded with about 63 million tons in 2019.

A decision to change the currency to pounds in Egyptian ports would be a “corrective measure to an already incorrect situation,” Shahaat noted. “The sooner it is made the better since it would alleviate the current dollar crisis and ease the burden on Egyptian factories and importers.”

Egyptian Prime Minister Mostafa Madbouly said following the devaluation of the national currency last month that the Russian-Ukrainian crisis has caused a greater impact on the Egyptian economy than the coronavirus pandemic. “As of now, the cost of oil and other commodities have increased at unprecedented rates, placing a severe strain on the budget,” he said.

Egypt's Central Bank recently released data showing that the country’s external debt increased by about $8.1 billion at the end of the second quarter of fiscal 2022, bringing the total to 145.5 billion.

In an attempt to mitigate the adverse economic effects of the current crisis, Cairo has requested financial aid from Saudi Arabia, the United Arab Emirates, and Qatar. By the end of March, these three countries pledged investments totaling $22 billion.

Hisham Ibrahim, professor of finance and investment at Cairo University, told Al-Monitor that the Egyptian government is taking steps in every direction to ease the current crisis, including reducing the demand for dollars.

Asked about other measures that the government could take, Ibrahim responded, “The global political situation is changing, with the Ukraine crisis casting a shadow across all countries, and international financial institutions have yet to provide a comprehensive assessment of the situation. World prices fluctuate dramatically, economic sanctions are imposed and the war rages on. We are still determining the size and scope of the crisis.