Egypt sent aid and logistical and humanitarian support to Sudan as the two countries stress the need to continue consultations and mutual coordination on Ethiopia’s controversial Nile dam. 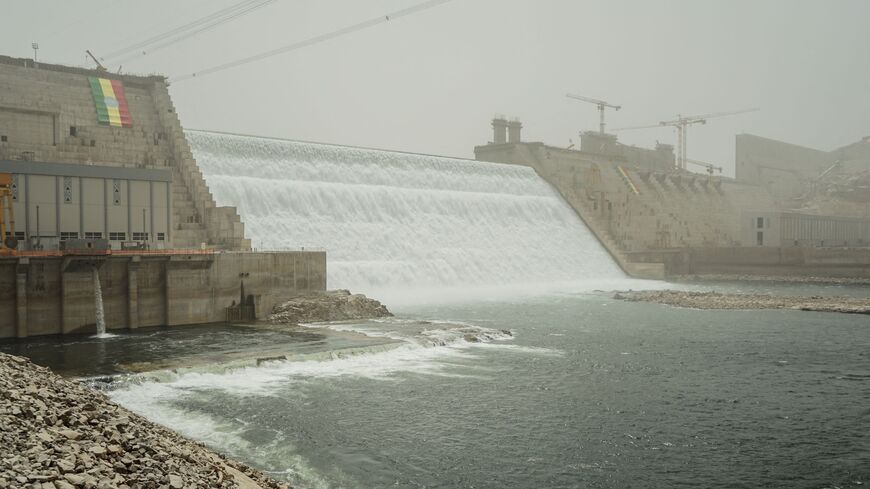 A general view of the Grand Ethiopian Renaissance Dam (GERD) in Guba, Ethiopia, on Feb. 20, 2022, shortly after Ethiopia began generating electricity from its mega-dam on the Blue Nile,, a milestone in the controversial multi-billion dollar project. - AMANUEL SILESHI/AFP via Getty Images

Egypt recently announced that it sent “aid packages and logistical and humanitarian support to Sudan” at the conclusion of a surprise visit by Sudanese leader Lt. Gen. Abdel Fattah al-Burhan to Cairo.

Burhan’s March 30 visit, during which he met with Egyptian President Abdel Fattah al-Sisi, comes as the flood season draws near and as Ethiopia remains determined to complete the filling of the Grand Ethiopian Renaissance Dam (GERD) on the Blue Nile, which started generating electricity in February.

Negotiations on the GERD between Egypt, Ethiopia, and Sudan are still on hold. The third filling is scheduled for July.

During a press conference in Cairo, Sisi and Burhan announced that Egypt and Sudan have agreed to continue mutual coordination regarding the GERD developments.

They reiterated that water is a national security issue for the two peoples, and said that the two countries are seeking a fair, legal, and binding agreement for filling and operating the dam.

Sisi also stressed the need for joint action so that “the current developments on the international scene do not affect efforts to help Sudan achieve political, security and economic stability.”

Following the talks, the two sides stressed the importance of boosting economic relations and increasing trade exchange. They also emphasized the need to achieve agricultural integration and implement the Electric Interconnection project, all the while deepening joint cooperation on the security and military levels. The statement added that Sisi and Burhan also discussed “the affairs of the Sudanese community in Egypt.

The Sudanese side further stressed “its commitment to benefiting from the transfer of the Egyptian experience in economic reform, training Sudanese cadres and providing them with assistance in facing challenges.”

Ali el-Hefny, former deputy foreign minister, former Egyptian ambassador to Beijing, and member of the Egyptian Council for Foreign Affairs, told Al-Monitor that both countries seek more integration in all fields, especially in economic, technical, security, and energy cooperation. He also stressed that Egypt supports the internal stability of Sudan.

Hassan Salama, a professor of political science at Cairo University, told Al-Monitor that “Sudan is a neighboring country for Egypt, and what happens in it affects us.”

On the GERD crisis, “The ball is in Ethiopia’s court,” he added, due to Ethiopia’s procrastination. He also pointed out that the Libyan crisis is one of the common issues that concern Egypt and Sudan, but that Egypt does not interfere in the Libyan issue, stressing that the Libyan leaders are the ones who asked for Egyptian support.

Abbas Sharaki, a professor of geology and water resources at Cairo University, told Al-Monitor over the phone that Ethiopia celebrated the 11-year anniversary of laying the foundation stone of the GERD last week. It was supposed to complete the entire dam in 2017. “It was the Ethiopian failure that impeded the implementation of the stages of filling the dam,” he said.

On Feb. 20, Ethiopian Prime Minister Abiy Ahmed inaugurated the first turbine of the controversial dam, with a capacity of 375 megawatts amid the stalled trilateral negotiations.

Egypt and Sudan, meanwhile, continue to stress the need to reach a tripartite agreement on filling and operating the dam, while Ethiopia asserts that its dam does not aim to harm anyone.