Eight years have passed since the war in Yemen began, and women there continue to exist in dire situations in which they are faced not only with the hardships of displacement but also with threats, persecution, imprisonment and banishment from exercising their political rights. 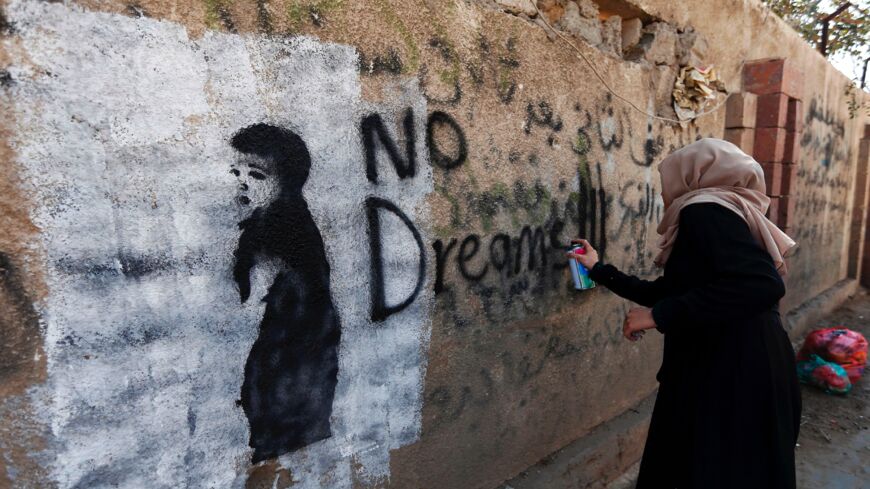 A woman works on a mural on the southern wall of Sanaa's university in the Yemeni capital during the Open Day of Art annual event on March 15, 2017. - MOHAMMED HUWAIS/AFP via Getty Images

A recent report by a Yemeni-based NGO revealed shocking numbers regarding the scale of abuses women in Yemen have faced since the beginning of the war.

SAM Organization for Rights and Liberties said in its report issued March 8 on International Women’s Day that more than 4,000 cases of abuses against women were recorded until the end of 2020, including murder, injury to the body, arbitrary arrest, forced disappearance, torture and prevention of movement.

The report also indicated that there are more than 900,000 displaced women in the camps of the Marib governorate as a result of the ongoing war in the country.

The Houthi movement has the highest rate of abuses against women with 70% of the cases, followed by Yemen government forces with 18%, the Southern Transitional Council with 5% and other parties with 7%. The violations varied between deliberate killings and severe injuries against female civilians and activists — acts that are tantamount to war crimes and crimes against humanity, according to the report.

Former Yemen Minister of Human Rights Houria Mashhour told Al-Monitor, “The war is a calamity for all people, affecting both men and women. But its impact on women is more severe. These usually lose their male relatives who perish in the conflict, and (the women then) become the sole breadwinner for their children and families, struggling to get work and the basic necessities of life such as water, food, medicine and other needs that have become scarce.”

“The war affects young women and men as well. The latter have to drop out of school to go to the battlefields. Also, women face health problems, especially mothers, in light of the deterioration of health services and the dispersal of families due to displacement or asylum,” she added.

Huda al-Sarari, head of the Aden-based Defense Foundation for Rights and Freedoms, told Al-Monitor, “Over the past few years of the war, women have faced gradual systematic practices to strip them of their rights amid the absence of laws, the disruption of state institutions and the militias’ control of most areas across the country, especially groups affiliated with the Houthis.”

“The de-facto authorities have committed crimes and violations against women that have never occurred in the history of Yemeni conflicts, stripping women of their rights and committing transgressions with purely ideological motives,” she said. “Many women have been sacked from their jobs and were not allowed to take up jobs in certain professions. This is not to mention restrictions of their rights, freedoms and prohibition of travel except with a male companion."

Sarari added, “Women have been under close scrutiny when it comes to community activities. They are banned from gathering and marching to call for rights and freedoms. This is not to mention arrests and [forced] disappearances. Many women faced death sentences and life sentences in prison for their actions, judged as being immoral from a wrong and narrow religious perspective.”

“Women face great challenges in demanding justice in the absence of laws and the lack of legal protection. Meanwhile, women’s and human rights organizations have been preoccupied with humanitarian relief as the war is still ongoing, in which women continue to be the first victims through systematic attacks on their lives and physical safety in the absence of psychological support, laws to protect women in armed conflicts, and the lack of commitment by the warring parties to international human rights laws and absence of accountability in Yemen,” Sarari said.

In a report issued in December 2020, the Yemeni Network for Rights and Freedoms documented 4,282 cases of abuse against women in Yemen from Sept. 21, 2014 (the start of the war), to Oct. 25, 2020. This figure includes 1,456 deaths; 2,379 cases of injury as a result of artillery shelling, the explosion of mines and explosive devices, and sniping; and 447 cases of kidnapping, disappearance and torture.

Qoboul Abdo al-Absi, head of the Qarar Foundation for Media and Sustainable Development, told Al-Monitor, “The war has caused the displacement of millions of Yemenis from the conflict areas. Some 5 million were displaced, mostly children and women who were left to look after their families amid poor basic services, which made them vulnerable to exploitation, torture, violence, deterioration in economic conditions and deprivation of education.”

“Women were also marginalized in the government formation (in 2020), with only one woman being part of the negotiations. Many women are also arrested and tortured with no regard to social morals. Many female activists and journalists are being threatened and arrested. They are not immune to abuses and killings in the most horrific ways, torture or boobytrapped, as was the case of the journalist Rasha,” she added, in reference to Rasha al-Harazi who was killed in a car explosion in Aden in November 2021.