Will Russia turn to Syrian mercenaries for its Ukraine fight?

Evidence is emerging that the Syrian government and its Russian military partners are recruiting Syrian fighters for potential deployment to the former Soviet state. 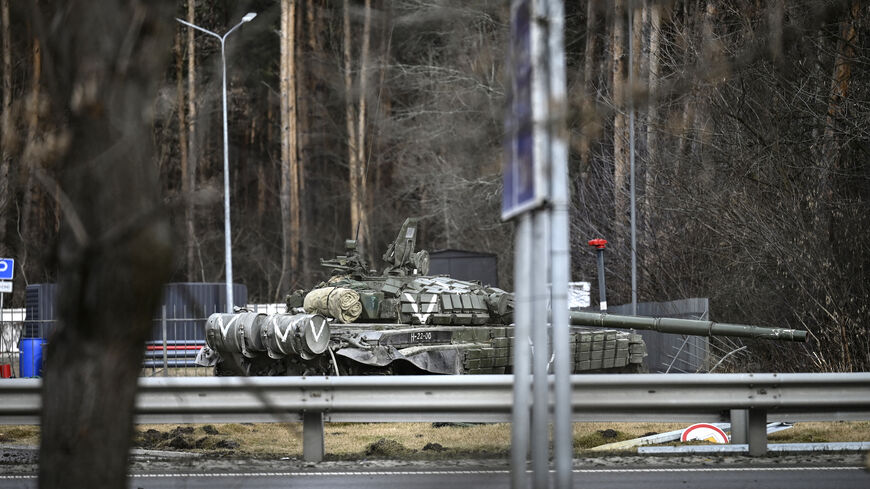 This general view shows a Russian tank in the city of Irpin, west of Kyiv, on March 4, 2022. - ARIS MESSINIS/AFP via Getty Images

As Russia’s war on Ukraine escalates, there is emerging evidence that the Syrian government and its Russian military partners are recruiting Syrian fighters for potential deployment to the former Soviet state, a move that would further stain the Kremlin’s image and constitute a blatant breach of international law.

Syrians for Truth and Justice, an independent civil society organization that has been monitoring the more than decade-long Syrian conflict, announced in a report today that it had interviewed at least two Syrians based in Damascus’ countryside who witnessed the recruitment effort for service alongside Russian forces in Ukraine.

"Both sources confirmed that lists with potential recruits’ names are being compiled to be presented to the Russian forces stationed in Syria for approval, with the intention of deploying them to Ukraine,” the report noted. Each of the sources requested anonymity for security reasons.

“The first source is a fighter who registered his name with the SG [Syrian government] security services to travel to Ukraine and fight alongside the Russian forces,” the report said. He cited the high cost of living in Syria and a lack of job opportunities as his reasons for deciding to fight in Ukraine.

The report also cites an official in a so-called reconciliation committee, the bodies that were established by Damascus in government-controlled areas to provide “amnesty” for those who sided with the opposition against the Syrian regime.

“I was at the Air Force Intelligence Branch to help a number of wanted persons surrender themselves and obtain a pardon in return,” the source said. “There, one officer started talking in front me, saying that they will prepare lists with the names of fighters who have sufficient combat experience. These fighters will be subjected to a small-scale training by Russian officers in preparation for sending them to Russia and transporting them to fight in Ukraine with the Russian side.”

Two Western officials speaking on condition of anonymity told Al-Monitor they had not heard of Syrian mercenaries being recruited to fight Ukraine, but that it could not be ruled out.

There are also whispers of a recruitment effort underway in eastern Syria. Omar Abu Layla, whose monitoring network Deir EzZor 24 covers developments in the oil-rich Deir ez-Zor province, says the private Russian military contractor Wagner Group is reestablishing a presence in the region and has approached Syrians with offers of modest salaries to fight in Ukraine.

Abu Layla said, “Wagner is trying to offer those guys to join them,” and that the outfit is saying, “You will be protected from [Syrian President Bashar] al-Assad and the Iranian militia; you will have a future."

The shadowy Russian security firm Wagner Group, which has been implicated in war crimes in Libya, is known to have close ties to Russian President Vladimir Putin. Putin denies any connection. Wagner forces are allegedly present in Ukraine, and according to The Times of London staged three foiled assassination attempts on Ukrainian President Volodymyr Zelenskyy over the past week.

A local activist speaking not for attribution says the Wagner Group and the Russian-backed Fifth Corps are recruiting pro-regime fighters in eastern Syria. Some contracts have already been signed among those with heavy combat experience, the source said.

The alleged recruitment effort is in its early stages and it remains unclear whether any decision for the Syrians’ deployment has been made.

Elizabeth Tsurkov, a leading researcher on the Syrian conflict with a vast network of local contacts throughout Syria, says there is evidence of people in regime-held territories “registering with individuals who are involved in the reconciliation processes and linked to Russian-backed units” to go to Ukraine. Tsurkov told Al-Monitor she did not have confirmation of direct Russian involvement and that it could be a contingency initiative by Syrian officials “in case the Russians ask.”

One of the sources cited by Syrians for Truth and Justice asserted that the participation of Syrians was no more than a “symbolic gesture of loyalty to Russia.”

The alleged effort mirrors earlier deployments of Syrian mercenaries by Russia and Turkey on opposing sides of the war in Libya and by Turkey in Azerbaijan’s 2020 war against Armenia over Nagorno-Karabakh. In Libya, the Syrian mercenaries were operating under the command of the Wagner Group.

The reasoning among Syrian government officials is that Syrian fighters’ experience in urban combat in places like Aleppo, Hama and Homs will serve them well in Ukraine. However, many analysts dismiss the idea. Aaron Stein, research director at the Foreign Policy Research Institute, a think tank based in Philadelphia, told Al-Monitor, “I can’t imagine what they need Syrian [mercenaries] for. They are poorly trained and pretty useless.”

Stein added, “Perhaps Russia needs bodies to stand around and get shot at, for an occupation.”

Russia has so far relied on mercenaries in its proxy wars, but Ukraine is different, as its own forces have openly invaded the country. The problem for Russia is not a lack of boots on the ground, but a string of miscalculations, with Ukraine resisting far more fiercely than initially anticipated. However, with thousands of Russians reportedly killed and Putin apparently determined to press on, the Kremlin may yet turn to mercenaries in desperation as the war drags on.

Rob Lee, a PhD student researching Russian defense policy at King's College London's War Studies Department and a visiting fellow at the Russian think tank the Center for Analysis of Strategies and Technologies, is closely monitoring the Ukraine conflict. He contends that Russia is already in need of more forces, telling Al-Monitor, "It is clear Russia needs more troops for Ukraine. They are apparently using conscripts who aren't supposed to be used in combat. So I wouldn't be surprised if they are using Wagner or other private military contractors to increase their numbers."

Marc Pierini, a former EU ambassador who has served in Syria, Libya and Turkey and is a visiting scholar at Carnegie Europe, said, “Be it for NATO or the EU, the deployment of Syrian mercenaries in Ukraine by Russia would further deepen the rift between Moscow and the West.”

Pierini added, “As we speak, it seems, however, that Russia is opting for a massive assault as seen in Grozny or Aleppo. We have seen this method at work, razing everything, talking later on Russia’s terms.”

The state-controlled Russian media, for its part, has been spreading allegations that Turkey is preparing to fly Syrian mercenaries to Ukraine, as it has to Libya and Nagorno-Karabakh. It’s understandable why Syrians living in opposition-held areas who continue to be targeted in Russian airstrikes would want to fight the Russians in Ukraine. However, analysts agree that this is highly unlikely for several reasons. Reputation-wise, it would be disastrous. Turkish-backed Syrian fighters are notorious for rape, torture and theft in Turkish-occupied areas of Syria. The abuses have been described as war crimes by the United Nations.

“Obviously there is a great deal of motivation to go and fight the Russians. The hatred of Russia is immense. People will go and fight for free,” Tsurkov noted. But these are just rumors spread across WhatsApp groups. There are no institutional ties between Ukraine and the Syrian opposition and Turkey, wary of provoking Russia, is maintaining a neutral stance.

“Ukraine has plenty of volunteers who are willing to fight, who speak the local language, who know the area well. What Ukraine seems to lack is weaponry, not a bunch of people who would serve as cannon fodder and looters. It would harm Ukraine’s reputation without any kind of benefit,” Tsurkov concluded.