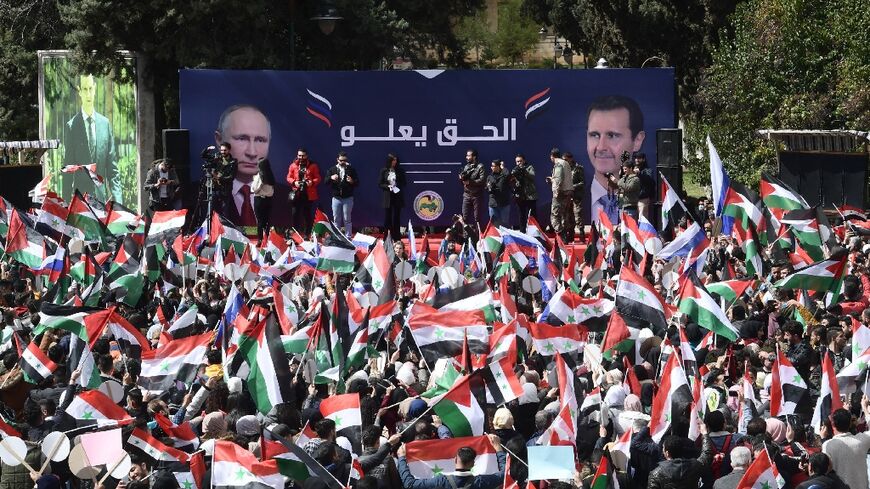 Students demonstrate in support of Russia following its invasion of Ukraine, at a university campus in the Syrian city of Aleppo on March 10, 2022 - -
by Aya Iskandarani
March 15, 2022 — Beirut (AFP)

Russia has drawn up lists of 40,000 fighters from Syrian army and allied militias to be put on standby for deployment in Ukraine, a war monitor said Tuesday.

The Kremlin said last week that volunteers, including from Syria, were welcome to fight alongside the Russian army in Ukraine.

The Syrian Observatory for Human Rights and activists said Russian officers, in coordination with the Syrian military and allied militia, had set up registration offices in regime-held areas.

"More than 40,000 Syrians have registered to fight alongside Russia in Ukraine so far," said Rami Abdel Rahman, who heads the UK-based monitor.

Moscow is recruiting Syrians who acquired combat experience during Syria's 11-year-old civil war to bolster the invasion of Ukraine it launched on February 24.

Russian officers deployed as part of the force Moscow sent to Syria in 2015 to support Damascus had approved 22,000 of them, Abdel Rahman said.

Those fighters are either combatants drawn from the army or pro-regime militias who have experience in street warfare and received Russian training.

In a country where soldiers earn between $15 and $35 per month, Russia has promised them a salary of $1,100 to fight in Ukraine, the Observatory reported.

They are also entitled to $7,700 in compensation for injuries and their families to $16,500 if they are killed in combat.

Another 18,000 men had registered with Syria's ruling Baath party and would be screened by the Wagner Group, a Russian private military contractor with links to the Kremlin, the monitor said.

Misinformation about Syrian recruits in Ukraine has been spreading online.

Last week, pictures were shared of a Syrian soldier they said had died in Ukraine, but it later appeared he had been killed in his homeland in 2015.

The Observatory said it had no confirmed reports yet of any Syrian recruits leaving for Ukraine.

Abdel Rahman said Russia had drawn Syrian army recruits from the 25th Special Mission Forces Division, once better known as the "Tiger Forces", and from the Russian-run 5th Division.

Fighters from the Palestinian Liwaa al-Quds group and the Baath party's military branch had also enlisted.

"Until now no names have been written down, no soldiers registered in any centres nor has anyone travelled to Russia to fight in Ukraine," Omar Rahmoun of the National Reconciliation Committee told AFP.

Syrian mercenaries have already fought on opposing sides of foreign conflicts, in Libya and Nagorno-Karabakh.

More than a decade of war has pushed 90 percent of the population into poverty, a factor Syrians for Truth and Justice said was a key factor in the recruitment.

A Syrian soldier told the activist group this month that he enlisted to fight in Ukraine because he could not find a job after his military service.

"The situation is extremely dire. There is no electricity, heating, or household gas," he said, adding he had registered at an air force intelligence office near Damascus.

Regime-allied forces opened recruitment centres in the eastern towns of Al-Mayadeen and Deir Ezzor, according to Omar Abu Layla, who heads the Deir Ezzor 24 media outlet.

"Wagner started the whole thing in Deir Ezzor; only dozens have registered so far," he said.

"In a country that lacks basic necessities, some have no choice but to fight... for a few hundred dollars."

Turkey-backed rebels in northern Syria are also gearing up to send fighters on the opposing side.

An AFP reporter in northern Syria said the factions preparing for Ukraine include the Sultan Murad, Sulaiman Shah and Hamza divisions, all of which had previously sent hundreds of fighters to fight in Libya and Azerbaijan.

While money is the main driver for Syrian mercenaries on both sides of the conflict, rights groups said Ankara's proxies often exploited fighters and withheld wages.

One fighter told AFP he was promised $3,000 to join the Ukraine battlefield.

"We are tired of the hunger... I will go and never come back. From Ukraine, I plan to go to Europe," another said.