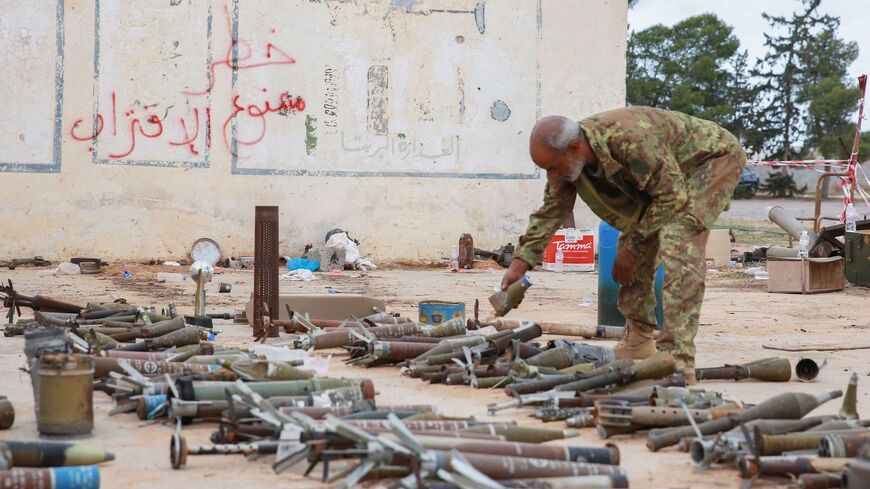 Military engineers of the UN-recognised Libyan Government of National Accord (GNA) sort ammunition and explosives for safe disposal in the Libyan capital Tripoli on Oct. 12, 2020. - MAHMUD TURKIA/AFP via Getty Images

The European Union on Wednesday placed economic sanctions on Kremlin insider Yevgeny Prigozhin over his allegedly close ties to activities of Russia’s Wagner paramilitary in Libya.

“Wagner Group is involved in multiple and repeated breaches of the [United Nations] arms embargo in Libya,” including “delivery of arms as well of deployment of mercenaries into Libya in support of [Gen. Khalifa Hifter’s] Libyan National Army,” an EU statement released Thursday read.

“Wagner Group has participated in multiple military operations against the UN-endorsed [Libyan] Government of National Accord and has contributed to damaging the stability of Libya and undermining a peaceful process.”

The penalty includes a travel ban and an asset freeze, the EU said, adding that EU citizens are barred from providing funds to Prigozhin.

“The council remains gravely concerned about the situation in Libya and in particular that threaten the peace, security or stability of Libya, including through violations of the UN arms embargo, human rights abuses and violations as well as the attempted illicit export of petroleum from Libya,” the statement read.

Why it matters: Prigozhin has known connections to President Vladimir Putin and is believed to be one of the leaders of Wagner. The group’s fighters have been spotted in conflicts from Ukraine to Syria to Mozambique and Libya. They operate as an unofficial arm of the Russian Defense Ministry.

A UN panel of experts earlier this year said Wagner fighters were involved in combat operations in Libya, including directing artillery fire and working as sniper units.

The fighters, for which the Kremlin denies responsibility, have also been accused of war crimes, including butchering a Syrian man in Palmyra in 2017. They were more recently accused of planting improvised explosive devices in civilian homes during the retreat of Hifter’s failing Tripoli offensive earlier this year.

The US military has also said Russia has brought as many as 2,000 Syrian mercenaries to fight in Libya, in response to Turkey's introduction of Syrian fighters to the conflict on behalf of Libya’s UN-backed Tripoli-based government.

Turkey increased its support to Tripoli after Hifter launched his offensive in April 2019. In response, Russia ramped up its own weapons and personnel deployments throughout the first half of this year, the UN and the US military have said.

Earlier this year, the UN Panel of Experts on Libya estimated that Russia had deployed as many as 1,200 Wagner paramilitary fighters to Libya. In September, the US Africa Command said it believed that number was as high as 3,000.

The United States has also said poorly trained Wagner pilots may be operating more than a dozen Russian fighter aircraft delivered to Libya, at least two of which are believed to have crashed.

Prigozhin was indicted in the United States for his alleged role in the Kremlin’s 2016 disinformation campaign to disrupt the US presidential elections. In 2018, Russian Wagner forces partook in a disastrous late-night assault on a US-held gas field in Syria, reportedly approved by Prigozhin.

What’s next: So far there’s little sign Russia is willing to give up on Hifter, though prospects for the warlord’s political future in a postwar Libya are slimmer than ever.

Prigozhin has now spoken out in support of Azerbaijan amid its war with Armenia in Nagorno-Karabakh. All eyes are on Russia over potential next moves in that conflict.

Know more: Turkey has already deployed Syrian fighters to the Caucuses war. Russia has objected to Ankara’s move, and Kirill Semenov examines what the Kremlin may do next.