Dozens of Russian oligarchs have obtained Israeli citizenship in recent years due to their Jewish heritage. Western sanctions over Russia’s invasion of Ukraine could affect Israel’s relationships with the billionaires as well as its technology sector. 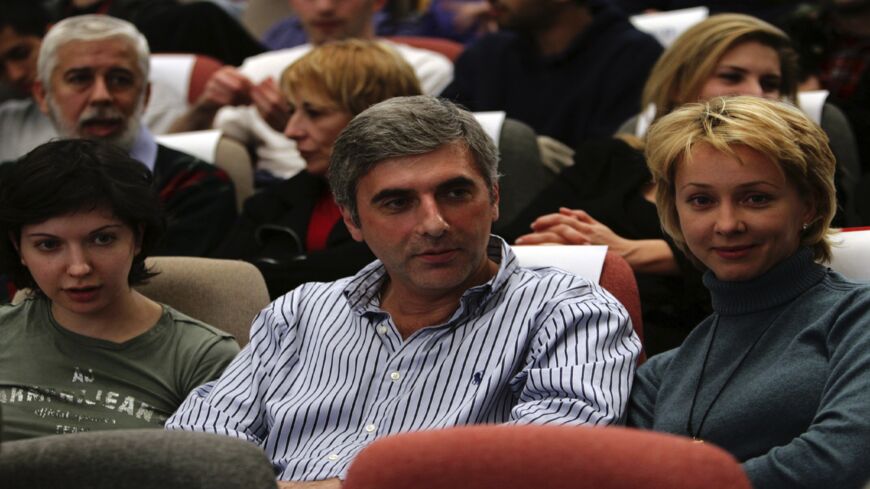 Leonid Nevzlin, a former Russian oligarch and the former CEO of the Russian oil company Yukos who fled to Israel in November 2003, is flanked by unidentified women Dec. 14, 2006, at the Hebrew University of Jerusalem, Israel. - David Silverman/Getty Images

Israeli Foreign Minister Yair Lapid told reporters in Romania Monday that “Israel will not be a route to bypass sanctions imposed on Russia.” The diplomat specifically mentioned sanctions by the United States and other Western countries on Russian entities in response to the invasion of Ukraine. Israel’s financial, aviation and energy authorities are currently coordinating on the issue, according to Lapid.

Israel itself has refrained from imposing its own sanctions. This is partly out of a desire to maintain friendly relations with Russia, which has a major military presence in neighboring Syria. Israel also may lack the legal framework to impose sanctions, Rina Bassist wrote for Al-Monitor. Israeli Prime Minister Naftali Bennett has also been negotiating an end to the conflict between Ukraine and Russia.

Israeli cooperation with the Russia sanctions could have significant economic effects on both countries. Several of the top Russian oligarchs are Jewish and have taken Israeli citizenship under Israel’s Law of Return. The Associated Press reported in 2018 that 30 to 40 Russian oligarchs have obtained Israeli citizenship. Some of these business people have been sanctioned since the Russian invasion of Ukraine.

While it is unclear that Israel will take any direct action against Russian oligarchs with Israeli citizenship, here are some who could be impacted if they do:

Abramovich is a billionaire who has become the face of the Russian oligarchs caught up in the fallout from the invasion of Ukraine. He is perhaps best known for owning the Chelsea FC soccer (association football) team, which plays in the English Premier League. He obtained Israeli citizenship in 2018.

Abramovich has significant ties to Israel. He has donated half a billion dollars to various health and cultural institutions in the country and owns real estate in the country, according to the Israeli technology news outlet CTech.

The United Kingdom sanctioned Abramovich last week, subjecting him to an assets freeze and a travel ban. The European Union then froze his assets on Mar. 13.

The UK and EU sanctions are already putting Israel in a difficult situation. Abramovich’s private jet landed in Tel Aviv on March 13 — the same day Lapid made his remarks, according to local media. Reuters reported yesterday that the plane arrived in Istanbul.

Abramovich is not sanctioned by the United States.

Fridman is another billionaire oligarch. Born in Ukraine and educated in Russia, he is a citizen of both countries as well as Israel. Fridman is heavily involved in Jewish causes, including some pertaining to Israel. He co-founded and financially supports the Genesis Prize, which awards individuals for acts of service to Israel and the global Jewish community.

Fridman has spoken out against the invasion of Ukraine. He has been sanctioned by the EU, but not the UK, where he spends much of his time. He is the co-founder of Alfa Bank, which is the largest private bank in Russia. The EU and the United States have also sanctioned Alfa Bank.

Fridman also co-founded the investment firm LetterOne, but his shareholdings were frozen by the company last week, according to the BBC.

Kahn is a close associate of Fridman, having founded the Genesis Prize and Alfa Bank alongside him. Kahn also served on the LetterOne board but resigned last week, according to the BBC. Both Kahn and Fridman’s names have been removed from the Genesis Prize website.

Aven was the third co-founder of Alfa Bank, alongside Fridman and Kahn. He also founded LetterOne with Fridman. Aven is of partial Jewish heritage, but it is unclear if he has Israeli citizenship. The AP reported yesterday that he is among the Russian oligarchs “believed to have taken on Israeli citizenship or residency in recent years.”

Nevzlin is an oil tycoon who fled to Israel in the early 2000s amid an investigation into the Russian oil giant Yukos, which he co-founded. Israel has refused to extradite him to Russia. Nevzlin renounced his Russian citizenship last week in opposition to the invasion.

Nevzlin has served on the boards of several Jewish and Israeli organizations, including the Jewish National Fund and the Hebrew University, according to The AP.

Kogan owns Moscow’s Domodedovo Airport and has invested more than $100 million in luxurious properties in Israel, per The AP. Kogan has not been sanctioned yet, but he put The Plaza Hotel in New York City up for sale last week, The New York Post reported.

Vekselberg obtained Israeli citizenship in 2019 and has worked to promote ties between Israel’s tech scene and Russia. He founded the now-defunct analytics company Fifth Dimension, of which Israeli Defense Minister Benny Gantz was chairman, according to CTech.

Vekselberg was sanctioned by the US Treasury Department last week over his ties to Russian President Vladimir Putin. Some of his assets were first frozen as a result of US sanctions back in 2018.

Several Israeli tech firms have also been affected by the war in Ukraine. The Times of Israel reported yesterday that the following companies have stopped operations in Russia:

Wix — a software firm that is publicly listed in the United States. Wix has been targeted by anti-Israel boycott campaigns.