The State Department said it was "concerned with the judicial process" that led to Omar Radi's six-year sentence. 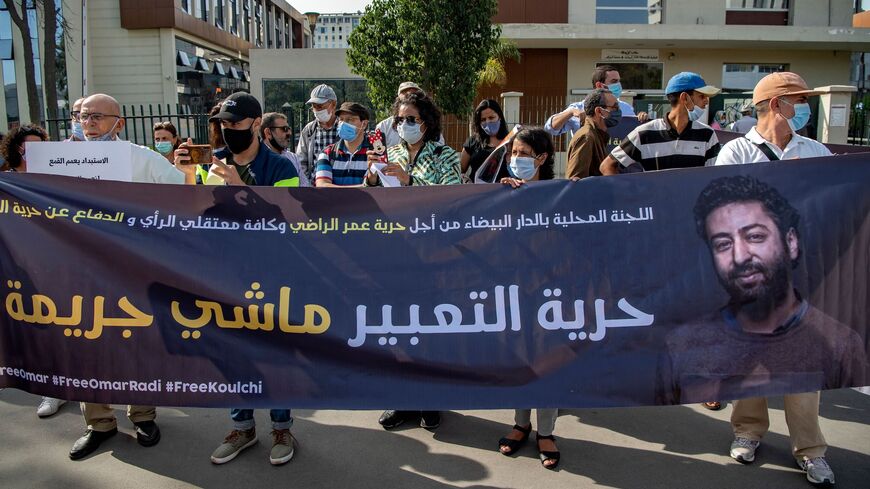 The mother (C-R) of Omar Radi (pictured), a prominent Moroccan journalist and activist on trial over charges of rape and receiving foreign funds for the purpose of harming "state security," demonstrates in support of Radi in Casablanca on Sept. 22, 2020. - FADEL SENNA/AFP via Getty Images

The Biden administration has voiced concern over a Moroccan court’s decision to uphold a six-year prison sentence for journalist and human rights activist Omar Radi.

“We are concerned with the judicial process that led to his sentencing and note that Mr. Radi has alleged violations of fair trial guarantees,” a State Department spokesperson told Al-Monitor.

The court’s decision on Thursday comes some six months after US and Moroccan officials met in Washington to discuss human rights, during which “State Department officials emphasized the importance of respecting fair trial guarantees — for victims as well as the accused,” the spokesperson said.

The latest:  Radi, 35, is one of the founders of independent Moroccan news outlet Le Desk and has written extensively about government corruption. In July, he was convicted of sexual assault and espionage.

Radi, who has remained in pretrial detention since July 2020, denied the charges against him. Human rights and press freedom groups are calling for a retrial after an appeals court in Casablanca upheld his sentence on Thursday.

Why it matters:  Radi is among a number of critical voices rights groups say have been targeted in Morocco, a country that ranks 136 out of 180 countries in Reporters Without Borders’ global ranking of press freedom.

“Moroccan authorities must halt this pattern of slapping independent journalists with absurd charges and ensure the press can report freely without fear of legal harassment,” said the Committee to Protect Journalists’ Middle East and North Africa coordinator Sherif Mansour.

What’s next:  Deputy Secretary of State Wendy Sherman will be in Morocco March 8-9 as part of a regional trip that includes stops in Turkey, Spain, Algeria and Egypt. Sherman is expected to meet with Foreign Minister Nasser Bourita and other Moroccan officials, the State Department said.

Know more:  In July, Moroccan journalist Soulaiman Raissouni was sentenced to five years in prison following trial proceedings that the State Department described as “inconsistent with the promise of the 2011 constitution and his Majesty King Mohammed VI’s reform agenda.” A court upheld his sentence last week.