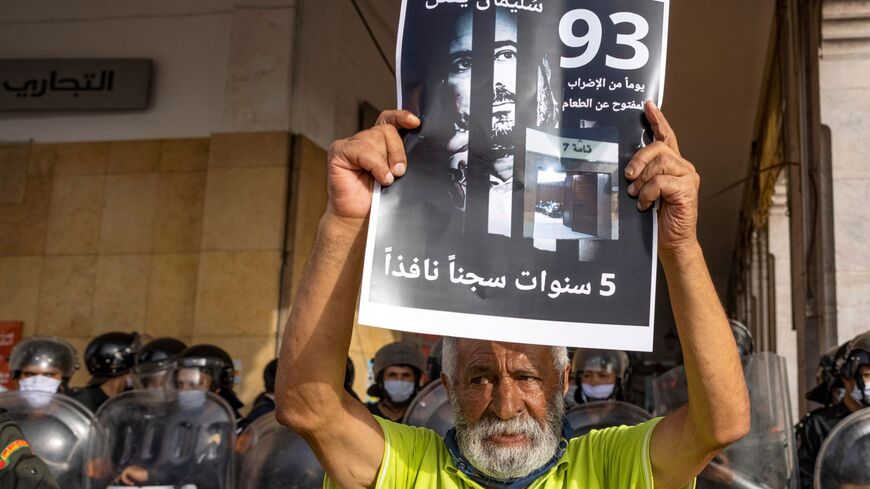 A Moroccan activist holds a banner with the image of Moroccan journalist Soulaiman Raissouni, who was sentenced to five years in prison, as his supporters protest on July 10, 2021, in the capital, Rabat, demanding his release. - FADEL SENNA/AFP via Getty Images

The United States is "disappointed" by the sentencing of a prominent Moroccan journalist convicted of sexual assault amid fair trial concerns, the State Department said Monday.

Soulaiman Raissouni, the former editor of the independent Moroccan newspaper Akhbar al-Yaoum, had been jailed without trial since May 2020. On Friday, a court in Casablanca sentenced him to five years in prison and imposed a fine of 100,000 dirhams ($11,205), local media reported.

Raissouni’s poor health caused by the hunger strike he launched in April reportedly prevented him from attending the trial.

Price added that the trial proceedings were “inconsistent with the promise of the 2011 constitution and his Majesty King Mohammed VI’s reform agenda.”

The Biden administration has raised the cases of Raissouni and other detained journalists, including award-winning reporter Omar Rady, with the Moroccan government, Price said.

The North African country is ranked 133rd out of 180 countries in Reporters Without Borders’ 2020 World Press Freedom Index.

In a statement on Monday, the Committee to Protect Journalists called on Morocco to release Raissouni and to “refrain from filing trumped-up sexual assault charges against members of the press.”

“Authorities must ensure that Raissouni receives the medical treatment he needs and that the country’s sexual assault laws will not be used as political tools to crush criticism,” said Sherif Mansour, the group’s Middle East and North Africa Program Coordinator.

The group says there are at least three journalists jailed in Morocco for alleged sex crimes, including Raissouni, who says the charges against him are “fabricated.”

His newspaper, Akhbar al-Yaoum, announced in March that it was shutting down following constant harassment of its journalists and long-running financial problems. Akhbar al-Yaoum's publisher, Taoufik Bouchrine, was sentenced to 15 years in prison in 2019 on sexual assault charges believed to be retaliation for his critical government reporting.