The court on Monday sentenced Omar Radi to six years in prison on espionage and rape charges he denies. 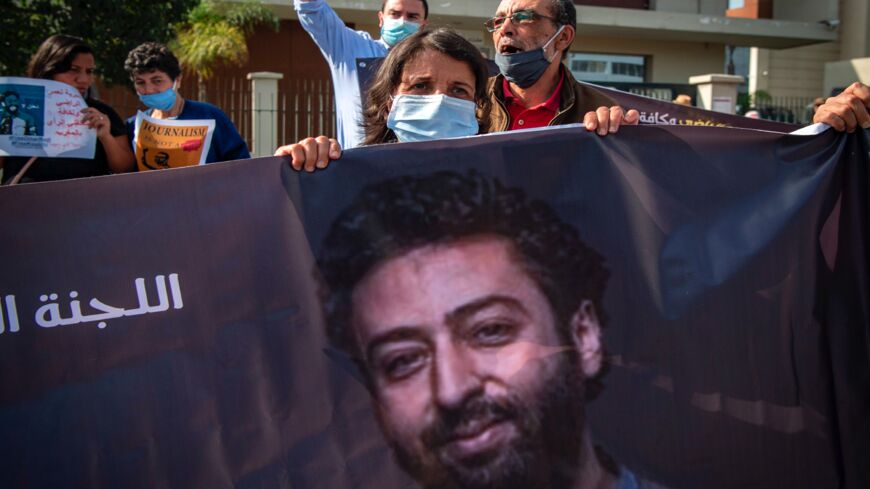 The mother of Omar Radi (pictured), a prominent Moroccan journalist and activist on trial over charges of rape and receiving foreign funds for the purpose of harming "state security," stands clad in a mask during a demonstration in support of her son in Casablanca on Sept. 22, 2020. - FADEL SENNA/AFP via Getty Images

A Moroccan court on Monday sentenced outspoken journalist Omar Radi to six years in prison on sexual assault and espionage charges he denies, following what rights groups described as a grossly unfair trial.

Radi, 35, is one of the founders of independent news outlet Le Desk and has written extensively about government corruption. In July 2020, Moroccan authorities arrested and charged him with “harming the internal and external security of Morocco” and receiving foreign funding to undermine state security. He was also charged with “rape” and “indecent assault against a female” related to a sexual assault accusation made by a former colleague.

Radi, who is detained in a Casablanca prison, denies the charges against him and says the sex was consensual.

Amnesty International said Radi and his legal team were denied access to some of the evidence against him as well as requests to summon defense witnesses. For nearly a year, Radi has been held in solitary confinement, the rights group said.

“Ever since his trial began it has been marred by flaws,” said Amna Guellali, Amnesty’s Middle East and North Africa deputy director. “Condemning someone to six years in prison after such flawed proceedings is not justice.”

Rights groups say Radi’s detention is emblematic of the kingdom’s increasing crackdown on the news media and perceived government critics. The North African country is ranked 133rd out of 180 countries in Reporters Without Borders’ 2020 World Press Freedom Index.

Last week, the State Department said it was disappointed by the sexual assault conviction and five-year sentence handed to another prominent Moroccan journalist, Soulaiman Raissouni. Ned Price, the department’s spokesperson, said the Biden administration has raised the cases of Raissouni, Radi and other detained reporters with the Moroccan government.

Days before Radi’s trial got underway last year, Amnesty International accused the Moroccan government of using spyware developed by the Israel-based NSO Group to hack Radi’s phone. According to the rights group, Radi’s phone was subjected to a series of attacks in 2019 and 2020 that installed the software on his device and gave the attackers full access to the phone’s camera, microphone and data.

A sweeping investigation published Sunday by a group of media outlets found that more than 30 journalists in Morocco, including Raissouni and newspaper editor Taoufik Bouachrine, have been targeted by the malware known as Pegasus. The Moroccan government on Monday "categorically rejected" the allegations.