New chemical analysis of the artifact has narrowed down the source meteorite of the blade, its manufacture and provenance. 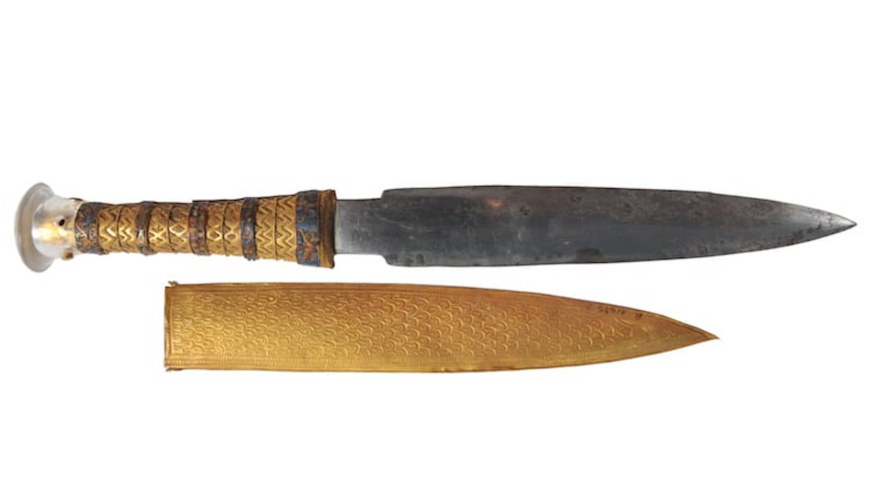 The iron dagger found in the tomb of the Egyptian pharaoh Tutankhamun. - Daniela Comelli et al

CAIRO, Egypt — A team of Japanese and Egyptian researchers has been able to establish the source of King Tutankhamun’s mysterious iron meteorite dagger. The scientists, who conducted a non-destructive chemical analysis of the artifact at the Egyptian Museum of Cairo, determined that the object was most probably crafted at a low temperature from an octahedrite, the most common class of meteoric rock. They have also revealed that the short knife was in all likelihood a gift that came to Egypt from Mitanni, in Anatolia, according to a recently published study.

When British egyptologist Howard Carter first entered the tomb of Tutankhamun in the Valley of the Kings in 1922, he found a chamber densely packed with objects piled up in great disarray. Among them lay a well-preserved dagger with a double-edged iron blade. It had a roughly polished surface, a prominent crack and a hilt made primarily of gold. The object's origin and manufacture quickly became an enigma, as researchers were uncertain if the technology to make a dagger from meteoric iron existed in the 18th Dynasty of ancient Egypt.

Tutankhamun reigned from 1361 to 1352 BC, the Late Bronze Age. This period precedes the time when people acquired iron processing technology and its use spread, known as the Iron Age, which is generally thought to have begun about a century and a half later, the study notes. But the high quality of the object indicated that the skill to work meteoritic iron in particular was well established wherever it was manufactured, so its origin and production method have attracted the attention of researchers for decades.

Tomoko Arai, the author of the study, is a lunar and planetary scientist at the Chiba Institute of Technology’s Planetary Exploration Research Centre in Japan. “The origin of Tut’s iron dagger is important because it directly affects the widely accepted history of human civilization from the Bronze Age to the Iron Age,” she told Al-Monitor.

To determine the source of the iron used to make the dagger, the team conducted an analysis of the distribution of nickel in the artifact. The findings suggested the presence of a Widmanstatten structure, a kind pattern found in metallic meteorites where nickel-poor sheets are exsolved from nickel-rich ones. In Tut’s dagger, these fine sheets, optically unnoticeable due to surface polishing, have a bandwidth of about a milimeter, which, added to its intermediate nickel content, implies that the source meteorite is an octahedrite.

This same chemical analysis allowed the researchers to ascertain the production method of the pharaoh’s iron dagger. The presence of the Widmanstatten pattern led them to rule out a process involving high temperature. And the extensive loss of sulfur detected in dark vesicular spots of the artifact’s blade indicates heating around 700ºC or higher. Along with other evidence, these elements suggest that the iron blade was made by low-temperature heat forging at less than 950 °C.

“The Widmanstatten structure consists of nickel-poor iron metal — kamacite — and nickel-rich iron metal, taenite. During cooling below 800ºC, kamacite starts to form in taenite by diffusion. [This] can only take place during very slow cooling on the parent terrestrial body of the iron meteorite,” Arai explained. “The presence of Widmanstatten structure means the dagger never heated above that temperature.”

For some in Egypt, the study of Tutankhamun’s dagger has stirred some controversy. Ayman Waziry, head of the Department of Egyptology at Fayoum University and vice president of the Union of Egyptian Archaeologists, told Al-Monitor that there was already enough information about the object and reexposing it for further analysis was unjustified. And he said that a single non-destructive technique is not sufficient to obtain new reliable results, so he believes that the process was unnecessary. “This will not lead us to the best way to preserve and maintain the dagger and its blade,” he said.

The other mystery on which the study sheds new light is the provenance of the iron dagger. The Amarna letters, primarily diplomatic correspondence written on clay tablets and discovered at the end of the 19th century in a royal archive in southern Egypt, contain a list of gifts sent by King Tushratta of Mitanni, in Anatolia, to Amenhotep III, grandfather of Tutankhamun, when the pharaoh married the princess Taduhepa, daughter of Tushratta. Among the gifts listed in the correspondence, which spans a period of at most 30 years during the New Kingdom between 1360 and 1332 BC, there is mention of an iron dagger.

It was long unclear whether the iron dagger mentioned in the Amarna letters is the same one found in Tutankhamun burial chamber, but the study indicates that this was most likely the case. The gold hilt's chemical makeup suggests the use of lime plaster instead of gypsum plaster as the adhesive material used for the decorations. But given that adhesives used at the time in Egypt were organic glues and that lime plaster was not used in Egypt for another thousand years, during the Ptolemaic period (305 to 30 B.C.), the dagger must have been brought from abroad. In this case, the study notes, it is most likely that the artifact came from Mitanni, as the Amarna letters indicate, because iron processing technology and the use of lime plaster were already prevalent in that region.

“While the Iron Age is thought to have started about 1200 BC, it has been known that the Hittites in ancient Anatolia already had the ironmaking technique. That is why we think about the possible foreign origin of the dagger. The hypothesis is consistent with the Amarna letters, which mentioned the iron dagger with gold hilt,” Arai said. “The origin from the Kingdom Mittani in Mesopotamia is our suggestion,” she added, while conceding that the debate is still open: “Not yet a definitive conclusion.”

For famed archaeologist and former Egyptian Minister of Antiquities Zahi Hawass, for instance, the evidence is not entirely convincing. “When Egyptians tried to make the capstone of the pyramid or they tried to do anything else, they really went to the desert to pick up stones to do it. There is a real possibility that this came from space, [reached] the desert and they then picked it up and made the dagger,” he told Al-Monitor.

“There are some studies of beads that came from a cemetery in Gerzeh [south of Cairo] from the pre-dynastic period, discovered in 1911, [that] were also made of octahedrite,” he noted. “What I want to say is that either it was made in Mitanni or it was made in Egypt. … This type of stone could be found in the desert of Egypt or in the desert of [Anatolia],” he said.

Waziry said that ancient Egyptians were familiar with meteoric iron and noted that they considered it pure as it came from heaven, which explains why they put meteoric iron in the tombs of their kings when it was available. For every day, Waziry added, they used iron found in the earth instead. “So the dagger is neither from Mittani nor foreign. It is purely Egyptian. It was found in Egyptian lands and it had ideological and religious connotations,” he concluded.