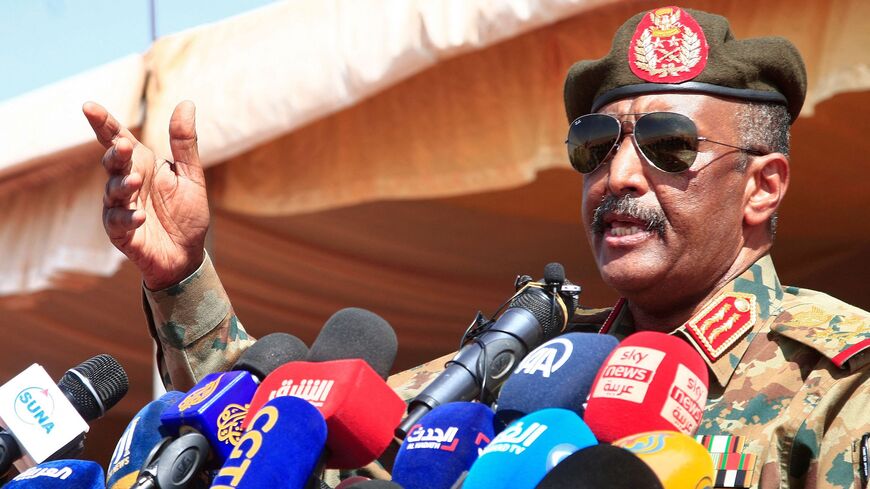 Sudan's military leader Abdel Fattah al-Burhan speaks as he attends the conclusion of a military exercise in the Maaqil area in the northern Nile River State, on Dec. 8, 2021. - EBRAHIM HAMID/AFP via Getty Images

Burhan arrived in Riyadh March 21 after visiting the United Arab Emirates, South Sudan and Uganda. He was received by King Salman bin Abdulaziz Al Saud and several prominent princes at the royal palace in Riyadh.

Sudan has been caught in a series political and economic crises since Burhan led Sudan’s October coup, declaring a state of emergency, dissolving the government and suspending some provisions of Sudan's constitution.

Protesters have taken to the streets, demanding the military leave the political scene and hand full power over to the civilian leadership.

Protesters have also been denouncing the deteriorating economic situation in the country, with price increases and the local currency's depreciation. They have been also protesting the frequent power cuts in most Sudanese cities, the result of a severe shortage of the petroleum-derived materials needed to operate power plants.

The director of Sudan’s Electricity Holding Company, Othman Daou Al-Bait, acknowledged the power cuts and attributed them to a lack of supplies.

International aid programs for Khartoum have been suspended since the military coup. Washington froze a $700 million support program for Sudan in condemnation and other international institutions followed suit.

Burhan’s visit to Riyadh comes as part of his efforts to secure the materials needed to operate Sudan’s power plants and obtain financial support to address the economic crisis in the country, accounting professor at the University of Sudan, Mohammed al-Nayer, told Al-Monitor.

Burhan also met with Saudi Crown Prince Mohammed bin Salman. According to a statement by the Sudanese Sovereign Council, the pair discussed bilateral ties and ways to enhance them.

“Burhan praised the kingdom’s continued support for Sudan to achieve stability and peace. He condemned the terrorist attacks carried out by Houthi groups and militias [against Saudi Arabia], stressing that the security of Riyadh is that of Khartoum. Burhan briefed bin Salman about the political developments in Sudan, emphasizing the government's efforts to achieve security and stability in the country,” the statement said.

Nayer said, “Burhan’s visit to Saudi Arabia and the UAE has an economic dimension, and most of the discussions revolved around the prospective investments of the Gulf countries in Sudan. Oil may be [provided to Sudan] in exchange for the export of some important commodities to the kingdom." He noted that electricity is "the backbone of development."

During his meeting with Burhan, bin Salman pledged his country’s ongoing support to Sudan and expressed the readiness of the Saudi Investment Fund to make investments in Sudan. The two sides also touched on the need for coordination and cooperation on Red Sea security as well as military cooperation.

Nayer added, “The Russian-Ukrainian war has directly threatened Arab food security, as most African countries import their wheat from Russia and Ukraine, as they are the largest exporters of wheat in the world. Riyadh and Abu Dhabi are likely to invest more in agriculture in Sudan in order to meet its wheat needs. Since Sudan has vast areas of agricultural land, Khartoum can be the food basket for the entire Arab world.”

On March 11 Burhan headed to the UAE on his first foreign visit after the October coup and met Abu Dhabi Crown Prince Mohammed bin Zayed.

During the meeting, Bin Zayed stressed his country’s support for the stability of Khartoum and announced that that money has been allocated for development projects to boost the economy. He expressed his country's desire to build strategic partnerships with Sudan and invest in agriculture, seaports and railway development, in addition to cooperation in the military field and the exchange of expertise.

Hussein Haridy, Egypt's former assistant foreign minister, told Al-Monitor, “Burhan's visit to the Gulf revolved around the energy and petroleum fields, financial aid and economic support for Sudan. The current political situation in Sudan is not encouraging for the Sudanese people, the business community or the international community." He said that Burhan’s visit "shows that the Sovereign Council is resorting to Riyadh and Abu Dhabi to mobilize economic support for Sudan.”

Sudan’s Minister of Energy and Oil Jaden Ali Obaid announced on March 21 that Sudan is able to supply only 42% of the electricity needed in the country.

Haridy said, “There is no doubt that energy is a key driver for progress and development, especially as we approach the summer months, during which power consumption increases. The Sovereign Council is in a very embarrassing situation due to the deteriorating economic conditions and the political turmoil.”

He added, “Sudan cannot carry on like this. We must return to how things were prior to the October coup and open the door to political pluralism. The Sudanese people should not fall victim to rivalries. The political conflict is between the military-political elite and the civilian-political elite, and if things remain the same, the situation in Sudan will implode.”