The decentralized groups of revolutionaries at the forefront of the fight against the coup authorities articulate for the first time a unified political vision. 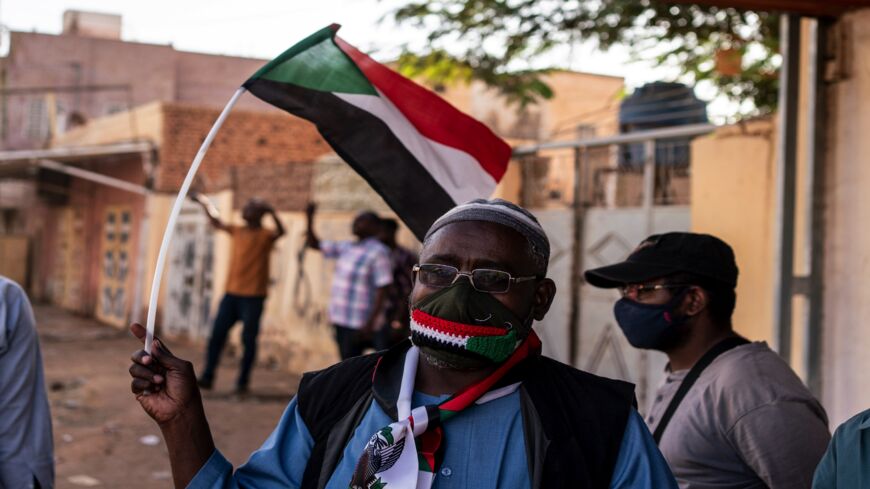 A man waves a flag at a Day of Resistance protest on Nov. 13, 2021, in Omdurman, Sudan. - Stringer/Getty Images

During a press conference on the afternoon of Feb. 27, the coordination of the Khartoum State Resistance Committees, the decentralized groups of revolutionaries at the forefront of the fight against the coup authorities in Sudan, announced the publication of their long-awaited political charter. The document sets out, for the first time, the main lines of these groups’ proposal for a way out of the crisis in which the country is mired, especially since the military takeover in October, and lays the foundations on which to build a new Sudan.

The charter puts forward a two-year transition during which a major overhaul of the state would take place. This period, as provided for in the text, would be supervised by the revolutionary forces and headed by a prime minister, of consensus among the signatories, whose functions will be defined in a transitional constitution. The announcement of the document, which aims to become a political reference that unites the revolutionary forces in Sudan, came after an extensive process of discussion and consultation among all the coordinators and their respective grassroots movements across Khartoum State.

With roots going back to the 1990s, the resistance committees rose to prominence during the mobilizations against Omar al-Bashir and proved to be particularly adept at dodging the regime’s repressive and co-optation tactics. Thanks to the greater space that existed during the aborted transition, this extensive network of groups gained experience and became deeply rooted in many neighborhoods. Together with its decentralized nature and strong local ties, this has allowed them to lead popular mobilizations since the October coup.

The political charter represents an amendment to the entirety of Sudan’s national project since its independence, and it attributes the failure to an elitist political approach that has consistently fallen short of addressing the roots of the country’s economic, social and cultural issues, eventually leading to the shredding of its social fabric. The document also states that the failure to embrace a developmental vision that ensures a fair and equitable distribution of power and wealth in Sudan is at the heart of the speedy downfall in its previous attempts at democratic transition. And in this context, it calls to take now on the mission of re-establishing the nation and building a civilian-led, modern, democratic state.

“The resistance committees wanted to be very transparent about their vision. We claim that we want radical change, and by radical change, we don’t just [mean that we] want to get rid of the military or coup leaders. We aspire to change the entire political sphere in Sudan because we do realize that the system is dysfunctional due to problems related also to the civilian politicians,” Alhaj said. “We want to come up with a new reality” she noted.

The charter makes as well an amendment to the entirety of the fragile transition that began in Sudan in the summer of 2019, shortly after the fall of former dictator Bashir. In this regard, it calls for the overthrow of the military regime imposed in the October coup and for accountability with all those involved. Also, the cancelation of the August 2019 document that served as the constitutional basis during the transition period, and the review of all the agreements and decrees issued since the fall of Bashir. The text states as well their rejection of direct or indirect negotiations with the coup generals.

In terms of transition structures and authorities, the charter proposes to draft a transitional constitution with the aim of achieving the goals of the revolution within a period of two years. It also calls for the establishment of a legislative council tasked with approving the appointment of the executive government, and the formation of commissions to handle issues such as peace and transitional justice. The document envisages as well the creation of local and state legislative councils as part of a highly decentralized federal system.

“The resistance committees have been accused several times of being sort of this mob that only knows what it doesn’t want and hasn’t been able to articulate what it does want. This charter shows that shift from what they don’t want toward what they want” Kholood Khair, managing partner of Insight Strategy Partners in Khartoum, told Al-Monitor.

The text addresses particularly sensitive issues. Khartoum’s resistance committees consider that transitional and criminal justice that address all the injustice, violations and crimes that have taken place in the country is the only guarantee of a full-fledged political transition and the only deterrence for the future. To that effect, they call for the formation of specialized courts, prosecution offices and a national transitional justice commission.

Another radical demand is the reform of Sudan’s security and military systems, including the National Intelligence Service, the police and the armed forces. In this regard, the charter calls for ensuring that the prime minister assumes the role of commander-in-chief of the military and that relations with the institution go through a ministry of defense that is responsible for their budget. It also demands the dissolution of all militias, including the Rapid Support Forces, the withdrawal of Sudanese forces from Yemen, and subjecting all security and military agencies to the executive and legislative authorities.

On the economic front, Khartoum’s resistance committees demand the creation of a national economic program that balances public debt management, including its review, and the advancement of fair and transparent economic development. Critically, they also call for a ministry of finance that controls all aspects of public financial institutions, including companies and bodies owned by or associated with the regular forces, and a review of all financial agreements since Bashir took power in 1989. It demands as well the establishment of an anti-corruption commission tasked with recovering stolen public money and looted assets, a body that could put the military back on target.

With regard to the peace file, the charter envisages a complete review of the Juba Peace Agreement, signed in August 2020 by the now-dissolved transitional government and several armed groups, within a comprehensive national framework to address its deficiencies, which it accuses of helping to create the breeding ground for the October coup. Instead, it calls for the establishment of a national peace conference for an intra-Sudanese dialogue in order to address the issue of war and peace from a radical approach.

“The message we were aiming to send with this charter is that we don’t want to focus on the people, we want to focus on the vision and the strategy for ruling Sudan. [So] this charter was not written only to address the transitional period, but actually, it was written while we had in mind the ideal environment, the ideal circumstance for building a Sudanese nation. This is a long-term charter,” Alhaj said.

Other issues addressed by the political charter include reforming the judiciary and the civil service system, as well as the need to assert that Sudan is a democratic state with rights and duties based on citizenship, strengthening and empowering women’s rights and participation in all public activities, and enhance the participation of young people in political, social and economic sectors. It also calls for the organization of a foreign policy conference to define a comprehensive framework for international relations.

“There has to be some recognition that the way in which the resistance committees have been resisting the coup is probably the most successful so far. So, we do need to see a shift in Sudanese politics, of allowing the resistance committees, and more important the way in which they work, to lead this oncoming process,” Khair noted. “Very few people, younger or older, in a political party or otherwise, have any experience of governing in Sudan, any experience of civilian democratic government in Sudan, so it’s not a case of experience,” she added. “It’s more about what these resistance committees have been able to prove, which is a commitment to these democratic norms.”

Alhaj said that now the will of Khartoum’s resistance committees is to open a discussion with all the other resistance committees in Sudan, some of which had already published their charters, in order to come up with a unified text. Mohaned Elnour, a spokesperson for the Sudanese Professionals Association, which is also at the forefront of the resistance against the military regime, told Al-Monitor that the group is still studying the document.

“Based on Sudan’s history, we would now be in a position in which we are just experiencing a coup, whereas now, in 2022, we are both experiencing a coup and a regime trying to consolidate, but at the same time the continuation of the revolution,” Khair said. “And that key difference, this time around, means that there is still some hope in the much near future that there will be a civilian government on the horizon.”