The leaders of the coup in Sudan are gearing up for direct talks with civilians for the first time since their seizure of power about eight months ago, a few days after lifting the state of emergency in the country. 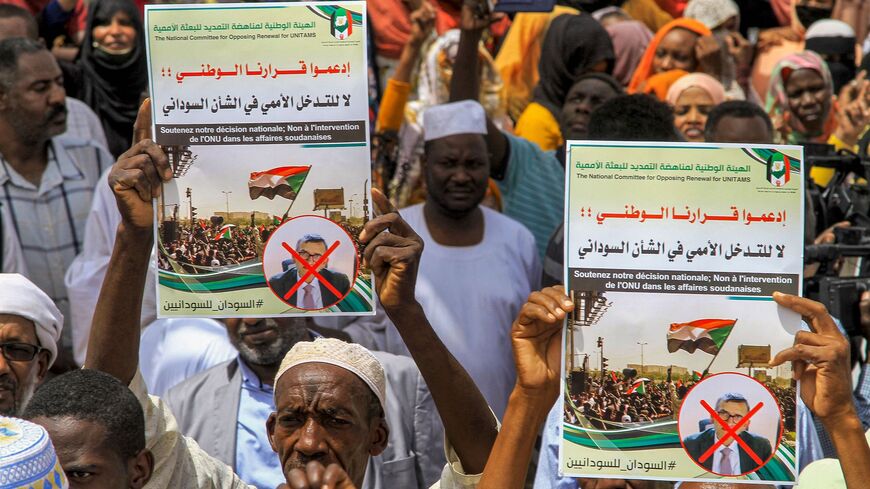 People gather for a protest outside the UN mission in Sudan's capital, Khartoum, on June 1, 2022. - EBRAHIM HAMID/AFP via Getty Images

Sudan’s rival parties are getting ready to sit face to face for the first time since the October 2021 military coup that continues to fuel a sharp political division in the country.

Volker Perthes, UN Special Representative to Sudan and head of the United Nations Integrated Transition Assistance Mission in Sudan (UNITMAS), revealed to the press on June 2 that the Sudanese army will hold direct talks with politicians and civilian activists this month to seek a solution to the current political crisis.

The negotiating committee, which will represent the military component, will be chaired by Gen. Mohamed Hamdan Dagalo, nicknamed Hemedti, who is the second man in the state and deputy head of the Transitional Sovereignty Council.

The news of the dialogue follows a meeting of representatives of the tripartite mechanism leading the political process in Sudan, which includes UNITMAS, the African Union (AU) and the Intergovernmental Authority on Development (IGAD) with members of a quartet military committee formed by the Sudanese army and headed by Hemedti.

Muhammad Belish, spokesperson for the tripartite mechanism, said in a June 2 statement the meeting “was constructive and tackled issues related to the intra-Sudanese talks expected to launch next week. The talks are aimed at restoring constitutional rule and fulfilling the Sudanese people’s aspirations to democratic transition and the building of new Sudan.”

The tripartite mechanism has been holding since May 12 indirect talks with the political key players in Sudan in an attempt to reach a deal that ends the political crisis plaguing the country.

In the direct negotiations proposed by the mechanism, the Sudanese parties are to address a number of issues, most notably the relationship between the military rule and the civilian rule in the transitional period, as well as the new constitutional arrangements in addition to the mechanisms for choosing the prime minister and the executive government.

This political breakthrough came days after the ruling Sovereign Council, led by army Chief Abdel Fattah al-Burhan, announced lifting the state of emergency that has been imposed throughout the country since the Oct. 25 coup.

The council said in a statement on May 29 that the lifting order aims “to prepare the atmosphere for a fruitful and meaningful dialogue that achieves stability for the transitional period.”

The move came upon the recommendations of the Sudanese Security and Defense Council (which includes senior army leaders and is deemed the highest security body), which also called for the release of all political detainees under the emergency law.

The decision was widely welcomed internationally. The Troika countries (the United States, Britain and Norway) praised the recent steps aimed to create the appropriate environment for dialogue, calling on all Sudanese parties to engage in the political process facilitated by the tripartite mechanism.

In a May 30 statement, the tripartite mechanism also praised the decision to lift the state of emergency and release political detainees as a positive step to create the necessary conditions conducive to a peaceful solution to the ongoing political crisis.

The tripartite mechanism also called on the authorities to release the remaining detainees and take the necessary steps to guarantee the right to peaceful assembly and expression and put an end to the excessive use of force against protesters. “We encourage all stakeholders to be prepared for a constructive dialogue in good faith on a political solution and a peaceful way out of the current crisis,” the statement added.

Later, a group of lawyers reported that the Sudanese authorities released dozens of political detainees while dozens of others remain behind bars.

The Emergency Lawyers Committee, an independent human rights body that provides aid to detainees, said that 24 detainees linked to the anti-military protest movement in Port Sudan and another 39 detainees who took part in the protests in or near the capital, Khartoum, were released.

Sudan has been struggling to complete the transitional phase toward a civilian democratic government and overcome a deep political crisis that began with the popular protests in April 2019 that forced longtime dictator Omar al-Bashir out of power.

Emma DiNapoli, a legal officer focusing on Sudan for the London-based human rights organization REDRESS, said that the lifting of the state of emergency was to some extent an encouraging step.

DiNapoli told Al-Monitor that the state of emergency was declared in violation of Sudanese domestic law and international law. "It would seem premature to describe this move on its own as an indicator of progress, particularly given the continued use of excessive force against protesters and reports of additional arrests," DiNapoli added.

Sudan’s political and security instability has also led to difficult economic conditions in the country since the military coup that ended a power-sharing arrangement with civilian ruling partners, which was aimed at paving the way for democratic elections.

Burhan rejects accusations of carrying out a military coup. He labels what happened as a rectification of the course of the transitional period and pledged to hand over power through elections or a national consensus.

On April 28, Sudanese authorities released several anti-coup civilian leaders who had been arrested in the crackdown staged along the army's takeover.

In addition to the abolition of the state of emergency, political forces and pro-democracy groups demand the release of all political detainees and the cessation of violations against peaceful protesters as a prerequisite for entering into political dialogue to end the current state of tension.

Kholood Khair, founding director of Confluence Advisory, a think tank in Khartoum, said that lifting the state of emergency has not created the right level of confidence to encourage pro-democracy forces to join any negotiations with the military. "It seems like a maneuver that is being dressed up as a breakthrough," she told Al-Monitor.

Meanwhile, some pro-democracy groups and political parties that were ousted from power by the coup still refuse to negotiate directly with the military. They demand instead a civilian rule without any partnership with the military.

Since the military coup, protesters have been taking to the streets regularly to demand the establishment of civilian rule. Paramedics close to pro-democracy groups reported that 98 people have been killed in the clashes with security services since the October coup.

Cameron Hudson, senior associate on African peace, security, and governance issues at the Center for Strategic and International Studies, told Al-Monitor it feels unlikely that the lifting of the state of emergency is going to translate into tangible improvements on the ground, at least in the near term.

Hudson sees this move as an effort to create time and space for the military to strengthen its hold on power. “The military was committing abuses, arrests, and killings of protesters from the start of the revolution and well before it imposed its state of emergency. Lifting it now does not mean that it intends to reverse this trend,” he said.

He added, “They (military leaders) will now look to extract concessions of their own from protesters and the international community. However, relieving pressure on the military or praising them at this point is exactly what they want and would only empower them further."

When the army seized power, the country was brought back to square one — when the protests toppled Bashir in 2019 — while the vital international aid to the country became at stake. However, it seems clear that Sudan's military junta is not willing to relinquish power in the foreseeable future.

The army leaders are hoping to gain the approval of the Western donor countries that have suspended funds and grants, causing the economic conditions to worsen.

Sudan has recently lost 40% of its revenues, which were secured by grants and international aid. After the coup, Western financial institutions froze the funds paid to the transitional government.

The World Bank and the International Monetary Fund froze $2 billion in aid they were about to provide to Sudan.

The United States also suspended $700 million in aid to Sudan, in addition to a shipment of 400,000 tons of wheat that were supposed to be provided to Sudan later this year.

Yet Friends of Sudan, a group of donor countries and institutions, links the return to a civilian-led transition to the restoration of economic aid and international debt relief.

DiNapoli said that Sudan’s military has plenty of experience in cleverly managing the expectations of the international community, and the lifting of a state of emergency seems consistent with that experience. Minor concessions without more to dismantle the real systems of oppression, like Sudan’s detention centers and legal framework, are not really sufficient to demonstrate a turn toward respecting human rights or a political opening, she added.

On May 24, Perthes told the UN Security Council that if authorities want to build trust, those responsible for violence against protesters must be held to account, noting that it was time to end all violence, release remaining detainees and stop arbitrary arrests.

Earlier in March, Perthes had warned that Sudan was close to “economic and security collapse” if a civilian authority does not take over the transitional period.

Khair said that instead of any meaningful desire to engage in a political process toward a solution, this is a regime that is trying to survive — it’s not a regime that's trying to reconcile. “It does seem to be much more of a facade designed to convince the international community that the regime is looking for a solution to a crisis of its own making,” she added.