An Atlantic Council event highlighted how fintech can help traditional financial networks and professions in Egypt, Tunisia, and the Gulf. 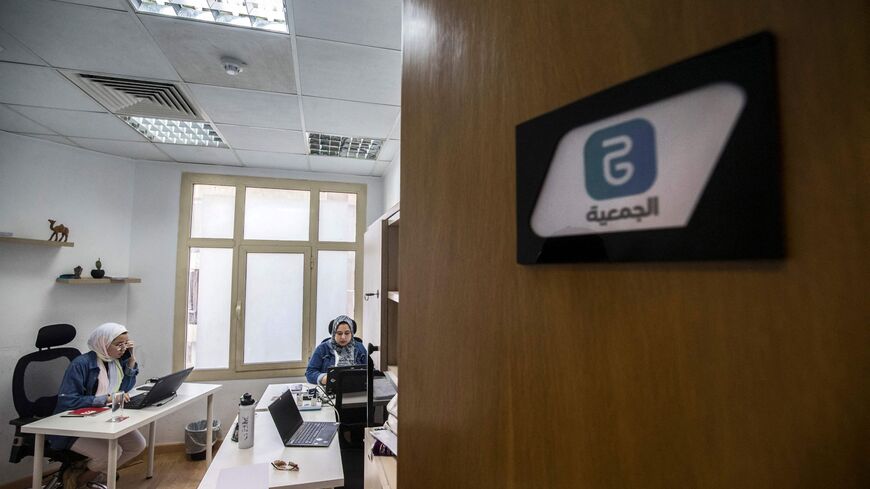 This picture taken on Sept. 12, 2021 shows a view of the company offices of "al-Gameya", a tech startup that runs an app to facilitate for strangers to create an informal money-pooling association to provide access for money in time of need, in Cairo. - Cash-strapped Egyptians fearful of banks have long relied on a "gameya" to access money in time of need, but now tech startups are cashing in on the practice. - KHALED DESOUKI/AFP via Getty Images

Several entrepreneurs spoke today about fintech’s potential to grow in the Middle East and North Africa.

The DC-based Atlantic Council held a virtual event titled “Inclusive finance in the MENA: How fintech opens doors for the masses.” The speakers discussed how financial technology, aka fintech, has the potential to be used by more people in the Middle East and North Africa. Bloomberg reporter Aisha Gani moderated the discussion.

Hassan Fayed is the founder of the Cairo-based startup Aydi, which aims to provide work opportunities to seasonal workers in Egypt — including farmers, whose income is “undocumented,” and whose industry operates “informally” with cash. They have difficulty accessing financial services via traditional banks as a result, according to Fayed.

“We’re capturing the data about these workers in terms of their productivity, their reliability, their earnings to be able to build meaningful profiles for them that allows us to offer them financial services,” he said.

Fayed said that Egyptian farmers are willing to embrace technology and use Aydi’s services.

“In the beginning, there’s a sense of skepticism about what this is going to add,” said Fayed in response to Al-Monitor’s question. “As soon as they start using it and seeing the value, we find them referring people.”

The co-founder of Xare, Milind Singh, who is based in Dubai, also spoke at the event. Xare is a money-sharing application that allows users to share their bank account and credit with their family, friends and “tribes.” Singh said they seek to find a “solution to migrant finance.” For example, current requirements of proof of income and identification mean that people who rely on remittances from relatives working in the Gulf cannot get financial services.

The founder of Tunisia’s Wiki Start Up, Mondher Kanfir, addressed some difficulties fintech could have in both Tunisia and North Africa as a whole. He pointed to the preponderance of non-convertible currencies in the region, and said some governments may be threatened by the rise of cryptocurrency in particular.

“It could produce some conflicts,” said Kanfir. “Put fintech at the policy level with the government, otherwise it will not develop in the region.”

On the other hand, Fayed said Egypt’s government has been a “major enabler of fintech.” He pointed to new banking laws in the country, which now address digital payments.

The Egyptian government is working to deregulate and modernize its economy, and the fintech sector is growing. Democracy in Egypt, however, is severely declining, according to many observers.